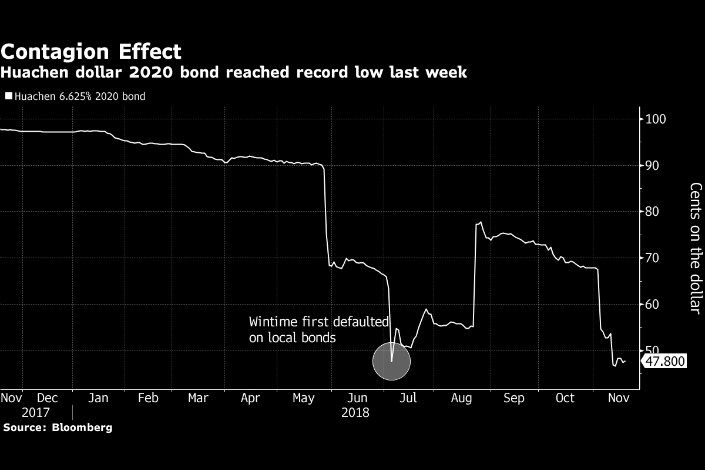 (Bloomberg) — A move by one of China’s biggest corporate delinquents to include bonds sold by a healthier subsidiary in a workout proposal has stoked concerns about creditors’ rights in a market still getting used to the concept of defaults.

Coal miner Wintime Energy Co. Ltd. by mid-2018 found itself incapable of servicing debt that quadrupled in less than five years. Now it’s proposing the inclusion of a $500 million note sold by Huachen Energy Co. Ltd. in a 70 billion yuan ($10 billion) overall restructuring package. Huachen hasn’t defaulted on those offshore notes, and bundling them together with the obligations of its more sickly parent could appeal to Wintime creditors.

The move is less appealing to investors who had considered subsidiaries as independent issuers — with their own balance sheets — when it came to creditworthiness. Should the plan go ahead, a greater degree of due diligence may be needed as fund managers grapple with the implications of a record run of defaults in the world’s third-largest bond market.

“If substantive consolidation was applied in China in the Wintime case, without the consent of the offshore bondholders, it would certainly be very surprising," said Kingsley Ong, a Hong Kong-based partner at Eversheds Sutherland. “Any attempt to apply the concept in a cowboy fashion, against the interests of the offshore bondholders, will almost certainly hurt foreign investors’ confidence toward debt issued by Chinese entities.”

The official in charge of Wintime’s information disclosure wasn’t available to comment and calls to the deputy head of Huachen Energy’s financial management department went unanswered. While Huachen itself has had challenges — missing a coupon payment on its 2020 dollar bonds in recent days — the company said in a statement late Tuesday that it will make that payment by Dec. 18, within the grace period.

In a developed market such as the U.S., there’s less focus on any parent company when considering the credit profile of a bond issuer, and any move by the parent that impinges on its unit could end up in court, market participants say. As the Wintime case affects dollar bonds, it also raises questions about creditor rights in the $804 billion offshore Chinese corporate-note market.

“The case highlights that even though the dollar bonds are issued directly by Huachen, as a subsidiary to Wintime it can still be impacted by what has gone wrong at the parent level,” said Gary Zhou, fixed-income director at China Securities International. He reckons that investors should be more cautious towards those issues and rethink the way they look at certain Chinese credits.

Wintime is delinquent on 15 billion yuan of local bonds, making it China’s biggest defaulter this year after oil trader CFEC Shanghai International Group Ltd., according to data compiled by Bloomberg. The company has proposed repackaging its debt into a rolling three-year maturity extension structure, where it pays 10-15% of the principle back every three years, with coupons set at the central bank’s benchmark lending rate. It also proposed applying 20 billion of the 70 billion yuan in obligations toward a debt-to-equity swap.

Grouping a parent’s debt with that of its units’ in a restructuring is known as substantive consolidation, a concept that wasn’t covered in China’s 2007 Enterprise Bankruptcy Law. While it wasn’t unusual in the past, China’s top court, the Supreme People’s Court, said earlier this year that such a move should only be done in exceptional circumstances with strict conditions — such as when the legal identification of the affiliate is highly mingled with the parent, or the differentiation of assets is excessively costly.

That makes Wintime a test case for market observers, at a time when stress is rising. Total local note delinquencies hit a record of 83.4 billion yuan so far this year, according to Bloomberg-compiled data. Average yield on junk-rated dollar bonds from China almost doubled this year to 11.6%, according to ICE BofAML indexes.

“This incident highlights investors need to be more aware of inter-company relationships such as who is controlling the issuer,” said Ek Pon Tay, portfolio manager for emerging market fixed income at BNP Paribas Asset Management. “That needs to be the factor that investors give a bigger weight to going forward. This scenario is a reminder for that.”