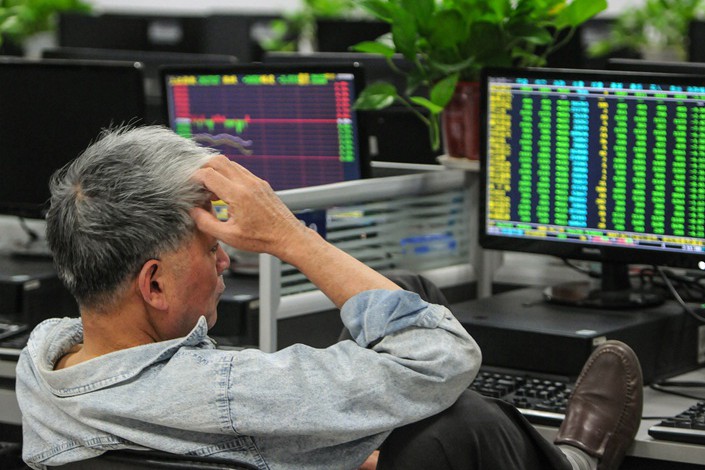 An investor monitors stock prices at a securities company in Jiujiang in China's central Jiangxi province on October 11. Photo: Bloomberg

(Bloomberg) — Investors in Chinese stocks aren’t taking any chances before next week’s meeting between presidents Xi Jinping and Donald Trump.

The measure had climbed nearly 9% from Oct. 18 through Monday, giving investors some respite from this year’s plunge. But the gains of the past month have now evaporated — the Shanghai Composite also fell more than 2 percent Tuesday. It is down 22% in 2018 as the trade war and slowing growth shattered confidence. Trump and Xi are due to meet at the Group of 20 summit in Argentina.

“People are turning cautious ahead of the meeting,” said Linus Yip, a strategist at First Shanghai Securities. “The restrictions over Huawei have increased concern about U.S.-China relations.”

U.S. officials have contacted counterparts and executives in countries including Japan, Italy and Germany about perceived cybersecurity risks with Huawei equipment, according to a report in the Wall Street Journal. The U.S. may increase aid for telecom development in countries that shun the company, the report said, citing people familiar with the matter.

Some railway-related stocks advanced after Bloomberg reported that Beijing-Shanghai High-Speed Railway Co. is planning to raise 30 billion yuan ($4.3 billion) in an initial public offering. China Railway Construction Corp. rose as much as 3.2% in Shanghai and China Communications Construction Co. added 2.3%, though both later swung to losses.

The Hang Seng Index fell 0.4% in Hong Kong, taking its weekly decline to 1%. Tencent Holdings Ltd. weighed on the benchmark with a 1.4% slide, while newly-listed food-delivery giant Meituan Dianping plunged 12% after results showed its operating losses more than tripled.