Opinion: Trump May Try to Get U.S. House to Take the Fall for His Foreign Policy Defeats

By Anne-Marie Slaughter and Elmira Bayrasli 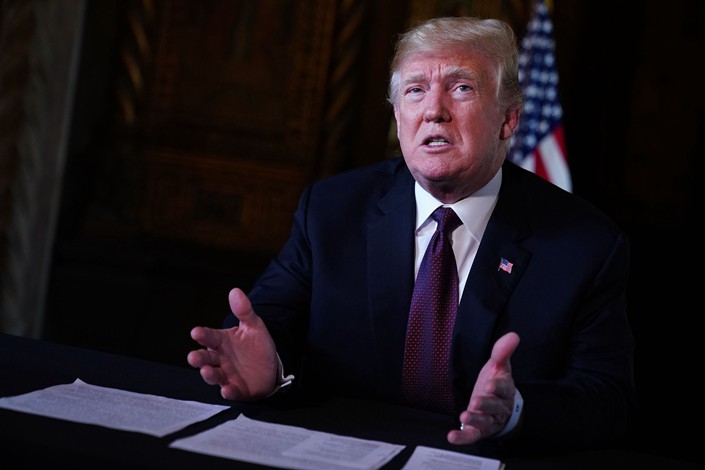 (Washington) — One thing missing from the recent U.S. midterm election campaigns was a focus on foreign policy. While much was made of the migrant caravan making its way from Central America through Mexico, issues such as China trade, Iran, North Korea, and even Russia and cyber subterfuge didn’t get much traction. With the Democratic Party having regained control of the U.S. House of Representatives, that will change.

A cornered U.S. President Donald Trump is likely to turn to a favorite tactic of autocrats everywhere: manufacturing foreign-policy crises to distract the public’s attention from problems at home. Trump’s determination to control media headlines makes him all the more likely, when it suits him, to call attention to the troubles in the Middle East, rediscover the North Korean nuclear threat, and force the Democrats to make a tough choice between being hard on Russia or getting into an arms race.

Trump may also decide to use Congress as a foreign-policy foil, tossing international challenges back into the lap of lawmakers, who will be hard-pressed to come up with good answers.

After all, in Trump’s zero-sum “I win, you lose” view of the world, congressional failures that he can blame on the Democrats are almost as good as White House successes. With the U.S. House of Representatives under “new management,” including a record number of Democratic women, Trump has a tempting target. He has every incentive to show up the newcomers by passing the ball and watching them fail.

In this new contest to pass the blame, Syria is ripe for the picking. Eliot Engel, the incoming chairman of the House Foreign Affairs Committee, has already said that the Democrats may seek congressional authorization for the use of military force in Syria. But no one, Democrat or Republican, has a plausible plan either for ending the war in Syria or even for helping Syrian civilians in significant numbers, other than making it risky for Syria’s ruler, Bashar Assad, to use chemical weapons too blatantly. Any move the Democrats make will be unpopular with their own voters and will simply shift attention from Trump’s inability to solve the problem to their own lack of a plan.

Iran presents Trump with another opportunity to inflict political damage on the Democrats. Trump followed through on his threat in January to withdraw the United States from the 2015 Iran nuclear deal — formally known as the Joint Comprehensive Plan of Action (JCPOA) — if Congress didn’t “fix” it. Specifically, he wanted the ability to reimpose sanctions on Iran, which he did earlier this month. Sanctions, Trump has long maintained, would force Iran to negotiate. That has not happened and is unlikely to happen.

To push Iran toward the negotiating table, and, more importantly, assert his authority and save face, Trump might be tempted to heighten tensions, if not provoke Iran into a confrontation. And here, Engel might be forced to play along.

Engel has said that Iran is the “most dangerous player” in the Middle East, and he was a vocal opponent of the JCPOA. Though he supported the deal after it was signed and opposed withdrawing from it, Trump could use Engel’s own position on Iran to push him to adopt a more-aggressive posture or risk appearing “weak” on national security. But the payoff is likely to be a foreign-policy crisis that produces no meaningful progress toward a new nuclear deal and plenty of blame to go around.

The Democrats also provide Trump an out on North Korea. Back in June, Engel introduced the North Korea Nuclear Baseline Act, which would require the White House to report on the status of North Korea’s nuclear program and provide a “base line” of progress for continued talks. Engel has already said he will call a hearing on the talks. Whatever is said in that hearing could provide North Korean leader Kim Jong Un with a ready excuse to renege on his already-vague denuclearization agreement with Trump. The U.S. president, Kim could argue, can no longer be trusted with a hostile Congress at his back.

Perhaps in anticipation of a Democratic-led House and a subsequent Democratic pile-on regarding Russia, Trump withdrew the U.S. from the Intermediate-Range Nuclear Forces Treaty (INF Treaty) in October, citing Russian violations. Signed in 1987 by U.S. President Ronald Reagan and Soviet leader Mikhail Gorbachev, the INF Treaty required both the U.S. and the Soviet Union to eliminate ground-launched ballistic and cruise missiles. The U.S. withdrawal from it signals the start of a new arms race.

Trump has already called for an increase in defense spending and the launch of a “space force.” As Democrats focus on Russian interference in the 2016 U.S. elections, Trump’s ties to Russia, and the details of Trump’s closed-door conversation with Russian President Vladimir Putin in Helsinki in July, they will be faced with the prospect of signing off on increased defense spending or else appearing dithering and hypocritical on Russia.

Much of the world breathed a sigh of relief at the Democrats’ recapture of the House because it signaled a vulnerability in Trump’s aggressively anti-liberal “America First” approach to the world order. But Democrats should resist the urge to try correcting Trump’s perceived wrongs. The House has just enough power to get into foreign-policy trouble and not enough to get out of it or to adopt and implement a coherent strategy. The Democrats’ best bet is to let Trump take the lead on global affairs, however unsavory, and actively work to check and balance his actions. Oversight and the power of the purse will be their most powerful tools.

In the end, Trump will need House Democrats for money, sanctions, or approval of trade agreements. If they play their cards right, he will have to deal them in. If they don’t, they will find that Trump still holds a much stronger hand.

Anne-Marie Slaughter, president and CEO of New America, is the author of “Unfinished Business: Women Men Work Family.” Elmira Bayrasli is co-founder and CEO of Foreign Policy Interrupted and the author of “From the Other Side of the World: Extraordinary Entrepreneurs, Unlikely Places.”