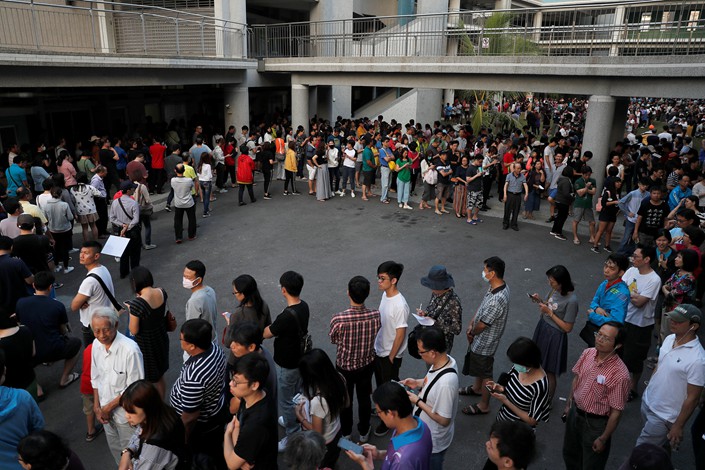 People queue to cast their votes at a polling station during local elections and a referendum on same-sex marriage in Kaohsiung on Nov. 24. Photo: VCG

Taiwan’s stock market rallied on Monday after local elections over the weekend produced a strong showing by the opposition, which generally favors a closer relationship with Beijing.

The benchmark TAIEX ended the trading day up 1.01%, after opening up more than 1% following the weekend election results. Leading chipmaker MediaTek Inc., which counts many Chinese smartphone-makers among its clientele, rose 2.7%; while Hon Hai Precision Industry Co. Ltd., a leading electronics manufacturer with extensive operations on the Chinese mainland, rose 1.43%.

The rally came after Taiwan’s voters delivered a resounding defeat to the Democratic Progressive Party (DPP), which has a stormy relationship with Beijing, in local elections Saturday, ousting it from several key strongholds.

Candidates from the opposition Kuomintang (KMT) claimed victory in mayoral races in the major cities of Kaohsiung and Taichung as well as governor positions in Yilan, Changhua and Yunlin counties, traditionally seen as DPP strongholds. Tsai Ing-wen, Taiwan’s top elected official, resigned as chairwoman of the DPP in the wake of the result.

Beijing considers Taiwan one of its provinces, even though the island has been separately ruled following a 1949 split after the country’s civil war. Relations had previously flourished under a previous administration headed by the KMT, which favors closer ties with Beijing. But they have deteriorated steadily under Tsai’s leadership.

Daiwa Capital Markets had forecast that a strong showing by the KMT would have a positive impact on the Taiwan stock market. “(The) TAIEX (is) likely to rise after election,” Daiwa said in a note dated Friday, a day before the election. “We also believe the election outcome will, to some extent, affect the index performance, based on past experiences.”

The TAIEX is down about 9% this year, and has lost nearly 12% of its value since the beginning of October. The island’s economy is closely linked with the Chinese mainland, whose stock markets have been among the world’s worst performers this year due to concerns about a slowing economy and trade tensions with the U.S.

The DPP’s resounding defeat presents a challenge to Tsai in the final 18 months of her current term. While the loss of several cities and counties doesn’t directly impinge on her ability to govern, it will likely energize the mainland-friendly KMT as well as embolden opponents within her own party.

The loss of Kaohsiung is a particularly significant blow to Tsai’s government. The largest city in the DPP’s southern heartland has been governed by the party ever since 1998. Members of the KMT pointed to Tsai’s controversial labor and pension reforms as well as stagnant wages as the main reasons for their strong performance across the island.