G-20 Is Working on an Endangered Species: the Summit Communique 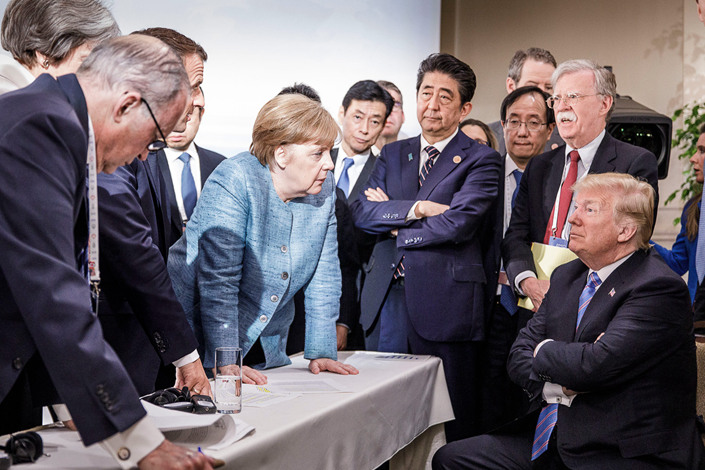 German Chancellor Angela Merkel deliberates with US President Donald Trump on the sidelines of the official agenda on the second day of the G7 summit on June 9, 2018 in Charlevoix, Canada. Photo: Bloomberg/Getty

(Bloomberg) — The global summit communique, with its all-night negotiations over square brackets and the placement of commas, is in danger of extinction.

For more than 40 years, so-called sherpas and their assistant “sous-sherpas” and “yaks’’ have been heaving these documents toward the pinnacles of international summits, producing blueprints for how their nations aim to work together to fix what’s broken in the world.

Communiques have had to be finessed in the past, but twice this year the entire process collapsed. At June’s G-7 meeting in Canada, President Donald Trump withdrew U.S. support for the document he had just agreed to, upset about the treatment by his host amid bilateral tensions over trade. No final statement was reached at an Asia-Pacific Economic Cooperation summit in Papua New Guinea this month, as China and the U.S. clashed, again over trade.

“Ca va etre coton” (it’ll be cotton), said a French official at the Elysee Palace, using slang for hard manual labor as he briefed reporters ahead of this week’s G-20 summit in Buenos Aires. “You saw the last multilateral summits — G-7, OECD, APEC — everywhere big difficulties, mainly because of the U.S. attitude.”

Events, as so often, may complicate things further at the G-20. President Vladimir Putin, for example, will arrive in Argentina fresh from his military’s seizure of Ukrainian naval vessels, reigniting a dispute over Russian aggression against its neighbor that has poisoned relations with the U.S. and the European Union since 2014.

The summit’s Argentine hosts are doing all they can to avoid a third diplomatic train wreck. They’ve given the sherpas three-to-four days, rather than the usual two, for the final climb, according to officials from several countries. They’ve also drafted a shortened text of as few as three pages, compared to 15 (plus supporting documents) at the last G-20 in Germany. The risk is they produce a communique so watered down it is meaningless.

But the troubles in global summitry aren’t just down to Trump. While his unilateralism and America First policies are triggers for the current, unprecedented level of difficulty in getting to agreement, the root causes stretch deeper, according to Cecilia Nahon, who spent four years as Argentina’s G-20 sherpa until 2015.

Trump, Nahon says, is himself a symptom of a backlash against globalization that was already underway, and inevitably makes it harder for leaders to compromise at meetings that sit atop the very machinery of globalization. The G-20’s negotiators have “not been able to deliver an agenda of inclusion that addresses the inequality and anxiety that are driving these changes around the world,” she said.

Another problem, according to a current G-20 sherpa who asked not to be identified, is the negotiators themselves. Sherpas are the personal representatives of national leaders. In 2008-2009, the people appointed to draw up communiques that helped avoid a meltdown of the global financial system were mostly economists, the official said. They were keenly focused on the substance of fiscal and monetary policy coordination. Today, most sherpas are diplomats, producing documents that tend to be less technical and less ambitious.

“The difference with 2008 is huge actually,” said Russia’s G-20 sherpa Svetlana Lukash, recalling how the depth of the financial crisis created a common sense of commitment that’s no longer as strong. “People feel complacency, there is no sense of urgency — and that prevents breakthroughs.”

Indeed, added Lukash, “any support for multilateralism, even mentioning of multilateral approaches is already ambitious in the current climate.”

For many outside the arcane world of sherpa working dinners, the question is: “so what?” A world without global summits and their communiques would continue to turn.

It did before the first “G” meeting in 1975. Like the inaugural G-20 summit in 2008, the first meeting of what would become the G-7 was born of crisis. The last helicopter had evacuated the roof of the U.S. embassy in Vietnam a few months before. The industrialized West — its economies hammered by soaring oil prices — seemed in retreat. So French President Valery Giscard d’Estaing invited the leaders of Britain, Germany, Italy, Japan and the U.S. to Paris, to take control.

In fact, most of the alphabet soup of international summitry — from the G-7 and G-20, to APEC, ASEAN, the EU and more — grew up either on the Western side of the Iron Curtain during the Cold War, or afterward, during the so-called unipolar moment. In either case, the U.S. and its norms dominated. But the unipolar moment ended in the aftermath of the financial crisis. And the competition to define global rules and responses has since grown fierce.

“The communiques are dead letters, there is really nothing in them at this point,” says Ian Bremmer, the political scientist who coined the term G-Zero to describe a world in which declining U.S. dominance and a wave of nationalist and protectionist impulses are leaving a vacuum of effective global governance.

That’s a view fiercely resisted by the sherpas, who believe the summits and their communiques are vital tools for resolving differences as those multiply. They set a high level agenda that other international institutions and even governments tend to follow, according to Sir Nicholas Bayne, a financial sous-sherpa for the U.K. in the 1990s, who since wrote several books on the G-7.

Still, last year’s Hamburg communique squeezed through only by recusing the U.S. from language on climate change — in other words, some of the big stuff. The same may now be needed for trade. “Domestically there is a bit of re-prioritization taking place,” said India’s G-20 sherpa, Shaktikanta Das. “But on issues that have a cross-border impact, it has to be done within the framework of multilateralism. People have to be mindful of the spillover effects.”

To avoid future public failures, some sherpas believe it may be time to shift toward a less contentious document — the chair’s statement. This allows the host to summarize the outcome, without other leaders having to sign up to every word.

That’s what Peter Boehm, sherpa for Canada, expected to do at the combustible G-7 summit in June, “because I anticipated difficulty on a number of subjects,” including Iran, trade and climate change. Others insisted on a communique, which ensures specific commitments and accountability.

The next couple of years, with France and the U.S. due to host G-7s, could well see change in how the summits are run, he said. Asked if we might see the circuit of global summitry stop altogether, Boehm said: “we might.”