Opinion: It’s Now or Never for a China-U.S. Trade Deal

By Yan Se and Pearson Goodman 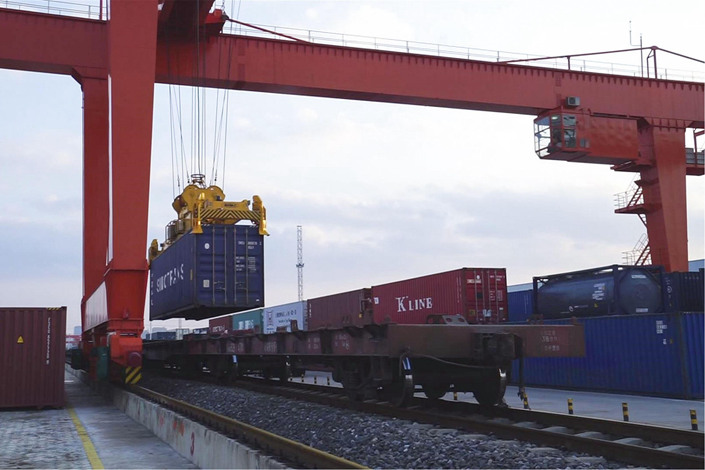 We are currently in the midst of a golden window of opportunity to end the ongoing U.S.-China trade war. A visible shift in rhetoric and policy by Chinese General Secretary Xi Jinping and other high-ranking party officials provide evidence that China is willing to make meaningful and sincere reforms. Under this liberalizing momentum, China and the U.S. are in better positions than ever to reach a deal that would work for both sides. Yet if such a deal is not made before the introduction of the next round of U.S. tariffs currently scheduled for early 2019, said tariffs could cause irreparable damage to the bilateral relationship.

The Donald Trump presidency has been a rollercoaster for U.S.-China relations. The beginning of Trump’s time in office was seen as a new high-water mark in the relationship between the two countries. Xi’s visit to Mar-a-Lago and Trump’s tour of Beijing seemed to confirm this optimism. Yet in little over a year, we have gone from this peak to a new low, with some viewing U.S. Vice President Mike Pence’s speech at the Hudson Institute a declaration of a new cold war.

Nevertheless, developments in the month since Pence’s speech indicate that both sides are in fact working hard to salvage the relationship. In the beginning of November, Trump tweeted that he and Xi had had a “very good” phone call, after which the two announced a planned dinner and meeting at the G-20 summit. At the recent Bloomberg New Economy Forum in Singapore, Chinese Vice President Wang Qishan used his keynote speech to express a wish for the U.S. and China to reach a mutually acceptable deal, and to imply that China seems ready for a compromise. Similarly, the joint U.S.-China security talks that had been postponed over U.S. arms sales to Taiwan were finally held this past week, with U.S. Secretary of State Mike Pompeo meeting with Yang Jiechi, director of the Central Foreign Affairs Commission. Both sides claimed positive results from the meeting, with the U.S. Embassy in Beijing going so far as to put media from the event on their official website. Most auspicious of all, China has already sent a written response to U.S. trade demands. Trump responded to this list by saying that “they sent a list of things they are willing to do, which is a large list and it is just not acceptable to me yet.” He followed this by noting that, “I think we’ll have a deal. We'll find out very soon.” In line with this, White House economic adviser Larry Kudlow has said that the U.S. and China have resumed contact “at all levels.” While the specific details of the letter are still murky, this might optimistically be the preliminary steps toward a deal.

Even if a deal can be made, a persistent fear from the U.S. side is that China might be willing to make superficial changes to reach an agreement but would resist truly implementing any reforms of substance. However, we believe that evidence from the past several weeks indicate that China has already began the process of substantial policy reform, and that any reforms agreed to with the U.S. would be sincere and in line with this new trend.

China’s recent policy changes have largely been triggered by downward pressure on the domestic economy. The current year has been a rough one for the Chinese economy. Investment growth has continuously slowed since the beginning of the year, as too have industrial and consumption growth. These factors, along with pessimism concerning Sino-U.S. trade frictions, have eroded market confidence — the Shanghai Composite Index has fallen 20% from the beginning of the year, and the yuan has continued to depreciate against the dollar. Recent third-quarter data was incredibly disappointing, showing China’s growth rate slowing to an almost 10-year low. The recent economic slowdown forced many manufacturing firms to close, with many workers losing their jobs as a result. The growing unemployment pressure is particularly grave for the Chinese leadership.

Since the ascension of Xi and the fifth generation of Chinese leadership in 2012, the liberalizing economic reform policies that drove China’s growth after its 1978 reform and opening-up have largely fizzled out. The leadership has prioritized state owned enterprises (SOEs) over private companies, and valued strengthening the state’s control over the economy rather than the economy itself. In fact, the lethargic pace of reform and liberalization that came after 2012 has become one of the largest complaints levied against China by the U.S., among others. However, under the recent tremendous political and economic stress, China’s economic attitude has begun to change. In a recent meeting with leading private entrepreneurs, Xi adopted a much different tone than usual, reassuring them that they are “our own,” and pledging to protect their legal rights.

In a country such as China, the words of one man can reshape the entire political system. After Xi’s speech, new policies immediately followed that reflected this change in rhetoric. The Chinese central bank recently announced special monetary tools aimed at providing liquidity for private firms. Guo Shuqing, head of the China Banking Regulatory Commission, announced a new directive that private enterprises should receive at least one-third of all loans originating from big commercial banks, and at least two-thirds of all loans originating from small and midsize banks. Previously, lending to SOEs crowded out almost all potential loans for private enterprises; the SOEs’ association with the government reduced political and economic risk to basically zero. In line with these policies, the China Securities Regulatory Commission also released a new initiative aimed at supporting private firms’ efforts to buy back stocks to prop up their stock prices, some of which have been reduced by over half during the tumultuous past year. And, in a show that officials from all departments can align themselves with Xi’s new direction, Justice Minister Fu Zhenghua just declared that private firms that break minor laws should be scolded and educated first rather than actually punished.

Besides the domestic economic reforms just mentioned, China has recently displayed a willingness to make serious changes to achieve a trade deal with the United States. Almost all aspects related to monetary and trade imbalances are on the table, as well as continued strengthening of intellectual property (IP) rights. As IP theft and trade deficits sit atop the Trump administration’s list of grievances, these are tempting trophies for the U.S. side. And while China will most likely be unwilling to give up total control of their industrial policies, specific subsidies can always be negotiated. Similarly, asking China to immediately get rid of its SOEs is too much to ask, as there are far too many workers depending on the SOEs as a form of social security, and we have already mentioned China’s aversion to any policy that might increase unemployment. Yet if a deal can help push China back to its previous path of reform, the importance of SOEs will naturally decline as private-sector support is rejuvenated.

Ultimately, we believe that China is willing to make sincere and significant compromises to achieve a trade deal with the United States. Under the premise of a deal being reached, we put forward the following predictions.

First, we predict that from now until at least 2020, China’s main policy influence will change from the current conservative left wing back to a moderately liberal one. This is in essence a correction from the past six years of state-control-driven development back to the reform-driven development of the ’90s and ’00s. The main impetus of this change will be to put China back on track to achieve Xi’s domestic economic goal of achieving a “moderately prosperous society” by 2020, a target which under current conditions China is predicted to miss.

Second, we believe that China’s behavior will become milder in the international environment. China has learned the hard way that aggressive political actions on the international stage can lead to significant pushback with real economic consequences. Recent efforts such as the Belt and Road Initiative have been seen by many as China’s attempt to assert itself globally as a world power — since China began the recent rollout of liberal economic policies, mentions and promotions of the Belt and Road Initiative have declined sharply. While China will still continue to strengthen its influence around the world, it will do so knowing that actions threatening to the current global order achieve little politically at a great economic cost.

However, our predictions hinge entirely on the U.S. attitude and the results of Trump’s and Xi’s meeting. Although the time seems ripe for a mutually agreeable deal, the clock is ticking. The Trump administration has already scheduled a tariff increase from 10% to 25% on the third list of Chinese goods. Potentially more damaging, however, is the Trump administration’s threat to place tariffs on all remaining Chinese goods should upcoming talks fail to result in a deal. These untargeted final tariffs would affect low-profit but high-employment fields, and the effect for the Chinese economic and unemployment situation would be devastating.

Large-scale unemployment resulting from the trade war, something we have yet to see as of yet, could mark a major shift in sentiment. Currently, most Chinese view the dispute as a disagreement between two governments, with some in the Chinese elite even welcoming it as a force for positive change. Yet massive unemployment would change this narrative, shifting the dispute to one between the Chinese and American people, and doing long-lasting damage to the relationship between the two countries. As we have already discussed, unemployment is the largest fear of the Communist Party. To sustain the regime in the face of such unrest, the party would likely swing back heavily toward the policies of economic and social control, pushing away from the U.S. and closer to states such as North Korea.

On his way to attend the ASEAN summit in Singapore, Pence remarked that, “It’s up to China to avoid a cold war.” The implication here is that a trade deal depends on whether or not China will be willing to make sincere and significant reforms. Yet China has already answered — these reforms are in fact currently underway. The window is now open for a deal that would give renewed energy to China’s liberalization and reform while getting Trump the large, deficit-shrinking numbers he craves. China has made its decision; it’s now up to the U.S. to make its own.

Yan Se is an associate professor with Peking University’s Guanghua School of Management, specializing in macroeconomics and the Chinese economy. Pearson Goodman is a graduate student studying economics at the Yenching Academy of Peking University.