China Has Become Much More Unequal, and Property Market Is to Blame 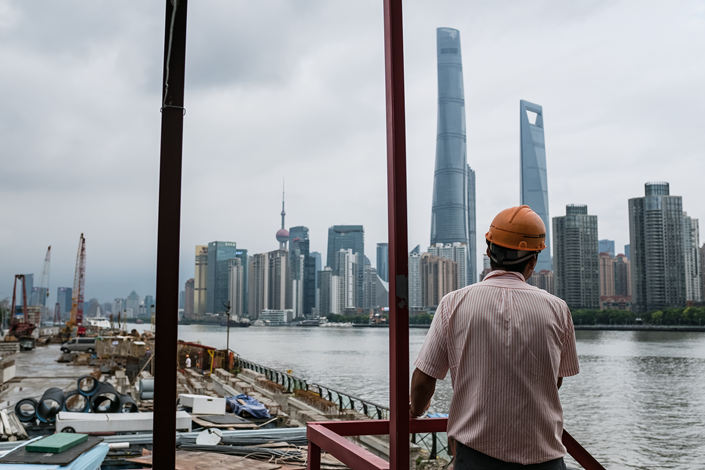 Shanghai’s Bund is seen under construction in September 2017. Photo: VCG

China’s Gini coefficient — which measures the distribution of wealth in a society and is the most commonly used tool to gauge inequality — rose by more than a third in just 10 years, between 2002 and 2012, due in large part to rapidly rising real estate prices, Wan Haiyuan, an associate professor at Beijing Normal University Business School, said at a news conference Thursday. The conference was hosted by Peking University to announce the results of a research project on wealth inequality in China led by multiple universities.

Academics at the event said the country’s stock of residential property more than doubled between 2002 and 2012. Real estate rose from accounting for 57.1% of the value of Chinese individuals’ assets to 73%, according to calculations by the Beijing Normal University. At the same time, skyrocketing prices more than doubled the value of residential property in the country.

But only a small group of people benefited from this rise in property values. The wealthiest 10% of the Chinese population saw their share of the country’s total assets rising during that 10-year period, while the remaining 90% saw their share of assets shrink, Wan said.

“This means that if you buy a home within Beijing’s Sixth Ring Road, you will already be joining the upper level of China’s wealth structure,” said Professor Li Qiang from the Peking University Institute of Social Science Survey.

“The asset structure of Chinese residents is undergoing a process of ‘detaching from reality,’ ” Wan said. The concern is that the Chinese population’s large investment in the real estate sector is being accompanied by a rapid decrease in real and productive investment.

When income flows from the higher-income sections of society into investments in manufacturing, toward middle- and lower-income segments and away from urban centers, the overall economy will develop in an orderly and sustainable manner, said Xia Qingjie, a professor of economics at Peking University. But “when house prices are too high, many people will be reluctant to invest in the manufacturing industry,” Xia said.

To make matters worse, China’s current tax system does little to redistribute wealth, researchers found. The collection of personal income tax in 2013 reduced the country’s income Gini coefficient by less than 1%, said Zhou Yunbo, a professor at the Nankai University School of Economics.

“Increasing the property tax and inheritance tax can help in terms of narrowing the income gap alone,” Wan said.

But the problem was picking the right moment to do so. “Under China’s current economic trends, collecting more in taxes may have a negative impact on the economy,” Xia said.