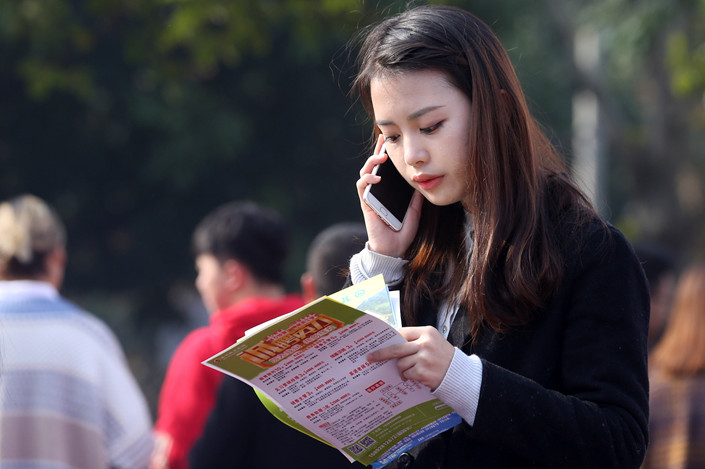 An attendee scours for jobs at a college graduation recruitment meeting held at Neijiang Normal University in Sichuan province on Nov. 25, 2018. Photo: VCG

It has been said that some large internet companies are freezing hiring or even laying staff off recently. Some other organizations have exaggerated, saying “2.02 million job ads disappeared within half a year.” Even if the rumors aren’t necessarily credible, and the analysis isn’t necessarily rational, talk of an “employment winter” and an “unemployment tide” continue to grow, reflecting the Chinese public’s worries about the employment situation.

It should be said that the employment situation on the whole is currently stable, and there’s no need to be overly anxious. But China should plan ahead for future problems. In order to do this, policies supporting employment must not be allowed to slacken. More importantly, the keys to healthy employment lie in factors beyond employment itself — stable growth, structural adjustment, promotion of reform, increased opening up.

Employment is the essence of the people’s livelihood. In recent years, the Chinese government has introduced a series of policies to promote employment, and has achieved some degree of progress in the “two innovations” (a 2013 policy to promote innovation) and in encouraging migrant workers to return to their rural hometowns and set up businesses. At the end of July, the country’s politburo named “stabilizing employment” the top priority out of their six “stabilizing” tasks. Official data show that, from January to September, 1.1 million new jobs were created in towns and cities across China, reaching the target for the entire year in just three quarters. The national unemployment rate was 4.9% in October, unchanged from a year ago. Other common market indicators — including the selection ratio and the index measuring people’s sentiment about their current employment situation — appear normal for now.

The decision-making level’s emphasis on employment is clearly focused on deeper contradictions and preventing problems before they occur. Downward pressure on the Chinese economy has grown this year. Considering complicated external circumstances, especially the U.S.-China trade war, domestic export-oriented businesses are facing increasing pressure. Add to that the effects of deleveraging and environmental protection campaigns, and it is clear that external and internal factors are a burden on employment. The Ministry of Human Resources and Social Security also admitted recently that pressure on total employment in China is still very high, structural contradictions in the employment market are still prominent, and the employment situation is still very serious and very complicated. In our view, the reason why the ministry called the situation serious and complicated is not only short-term employment pressure, but rather the interaction between cyclical and structural factors. A key manifestation of this is the oversupply of low-skilled, manual laborers, and the undersupply of highly-skilled, creative workers. This situation will be hard to reverse in the short term. As the level of informatization in the Chinese economy grows, and the population rapidly ages, middle-aged migrant workers and other sensitive populations’ employment problems will become intractable, and there is still no clear solution at the moment. It is irresponsible to view this simply as “acceptable unemployment.”

The facts show that providing unemployment insurance, offering temporary allowances and launching career-switching training will have some but not enough effect. The most powerful tools to promote employment are fundamental, medium- to long-term measures like institutional reforms and industrial restructuring. In recent years, China has gradually transformed from an employment market focused on industry, to one focused on services. If this transformation had not happened, the employment situation would be far grimmer today, considering the overcapacity faced by many traditional industries. One cause for concern is that the innovative economy hasn’t fully taken off yet. Only a timely adjustment of economic policy and an early response to upcoming changes in the employment structure will mitigate the impact of the rise of new technologies and the effect of automation on the job market.

It should be pointed out especially that private enterprises are the main creators of employment, accounting for 90% of new jobs in towns and cities. However, they have for many years had a hard time doing business, with many of them falling into dire circumstances recently. China must increase support for private enterprises at various levels including the systematic, legal and policy levels, to protect their legitimate rights and interests in accordance with the law, and implement the property rights protections and fair competition policies that have already been launched. Policymakers must create a level playing field, and truly implement the principle of competitive neutrality, in order to increase entrepreneurs’ confidence and boost businesses’ vitality. We can say that stabilizing employment means stabilizing private enterprise.

In the medium term, China should accelerate the transformation of its industrial structure, and continue to create jobs. The increasingly large tertiary sector is absorbing the massive labor force shifted out of the primary and secondary sectors. However, China’s service sector is not yet developed enough, and the number of manufacturing jobs is falling faster. This will inevitably put some pressure on employment. China should accelerate the growth of its modern service industries, especially in the area of producer services. These areas often face excessive government supervision. China must break monopolies and widen access in these areas in order to avoid a situation where it has the necessary resources but is unable to produce results.

Stabilizing employment requires lifting the quality of the workforce, and also requires the free movement and rational allocation of labor. A key point is accelerating educational reforms. In the elementary stage of education, China should pay attention to nurturing students holistically, especially in terms of independent thought, in order to create citizens who are ready for the requirements of modern society. It should also keep up with the times in the management of its institutions of higher education and in professional training, in order to weather the uncertainties of labor demand in a globalized world. If China hesitates in implementing education reforms, its people will pay the price and have difficulty finding employment. At the same time, China should reform its household registration system as soon as possible, to prevent high-quality workers from taking on unsuitable jobs due solely to household registration restrictions, which would be a massive waste and a distortion of the market. Additionally, China should improve its social security system. It should try to offer as much coverage as possible, within sustainable limits, and increase the level of security, in order to protect the unemployed from hitting rock bottom.

“Stabilizing employment” is a top priority among the government’s six major “stabilizing” tasks. Naturally, it requires particular attention and proactive effort. However, this task is intrinsically linked with the other tasks of stabilizing finance, trade, foreign investment, investment, and expectations. Completing the five other tasks is key to thoroughly stabilizing employment. Additionally, the growth requirements for employment are no longer as large as they used to be. As the Chinese economic system grows, the increase in GDP required in order to achieve an increase in jobs has fallen. As the population ages, the number of people entering the workforce each year will also gradually fall. It should become the consensus in Chinese society that even if economic pressure grows, it will not be necessary to reopen the floodgates of “massive stimulus” and slow down the pace of supply-side reforms in order to stabilize employment.