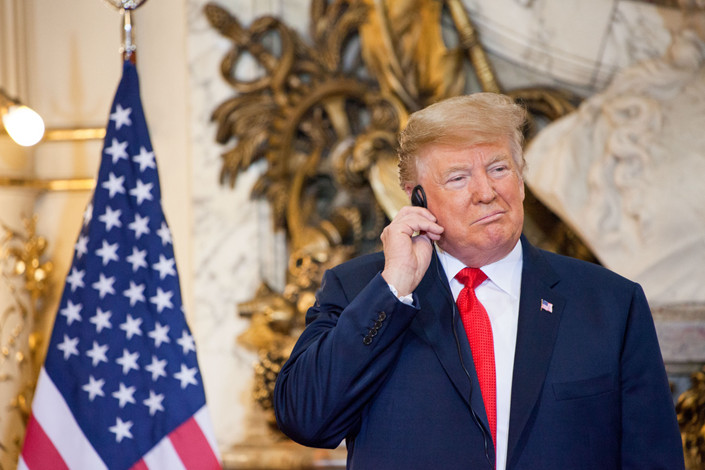 “The negotiations with China have already started. Unless extended, they will end 90 days from the date of our wonderful and very warm dinner with President Xi in Argentina,” President Trump said. Photo: Bloomberg

(Bloomberg) — Donald Trump suggested Tuesday that he could extend a 90-day truce in his trade war with China, while his top White House economic adviser backtracked from the president’s announcement that Beijing had agreed to reduce tariffs on U.S.-made cars.

The developments again called into question the extent of a trade agreement the White House said Trump had struck with Chinese President Xi Jinping over dinner at the Group of 20 summit on Saturday.

Trump said in a series of tweets on Tuesday that “unless extended,” negotiations with China over economic policies the U.S. has long considered objectionable would end in 90 days. If the talks fail, Trump said he’d be happy to maintain tariffs on Chinese imports.

The director of the National Economic Council, Larry Kudlow, meanwhile said that an agreement Trump said he had secured from China to reduce or eliminate tariffs on U.S.-made cars isn’t final, backtracking from Trump’s announcement just two days earlier.

“I think it’s coming, OK,” adviser Larry Kudlow said on Fox News Tuesday. “It hasn’t been signed and sealed and delivered yet.”

Markets on Monday cheered the temporary trade-war cease-fire following Trump’s dinner with Xi in Buenos Aires. But stocks gave up a chunk of those gains on Tuesday as the details of any agreement remained unclear.

The two sides didn’t issue a joint statement after the dinner. Instead, the White House and Beijing offered separate interpretations of the talks. The uncertainty was compounded by Trump’s tweet on Sunday saying China had agreed to cut tariffs on U.S. car imports, a commitment that Beijing didn’t confirm.

The president tweets on Tuesday added to the uncertainty, as he hinted at the possibility of extending a tariff truce.

Trump said Robert Lighthizer, his trade czar, would lead negotiations in the coming months to try and determine what sort of deal was possible.

“The negotiations with China have already started. Unless extended, they will end 90 days from the date of our wonderful and very warm dinner with President Xi in Argentina,” Trump said.

The talks would focus on “whether or not a REAL deal with China is actually possible”, Trump said. “If it is, we will get it done. China is supposed to start buying Agricultural product and more immediately. President Xi and I want this deal to happen, and it probably will.”

The U.S. and China said following Saturday’s dinner that Trump had agreed to suspend a planned increase Jan. 1 to 25% from the 10% tariffs imposed on $200 billion in imports from China in September. But the remaining details of what was agreed at the dinner remain murky.

China’s government isn’t yet able to formulate its response to the summit on trade with Trump as senior officials are still out of the country with Xi, according to three officials who were briefed but declined to be named as the matter isn’t public.

In brief statements following the meeting, the U.S. and China emphasized different results, with the split highlighting the wide gap they must overcome over the next three months.

Officials in Beijing declined to comment on Trump’s auto tweet and haven’t confirmed such an agreement. Kudlow told reporters at the White House that he believes the president expects China will reduce its car tariffs to zero.