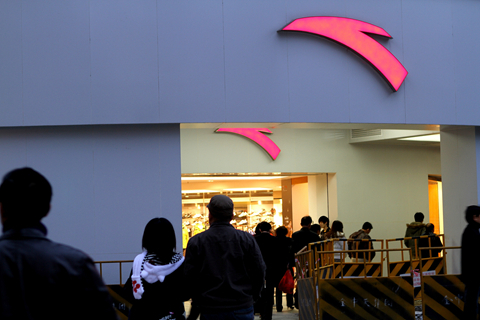 A consortium led by China’s Anta Sports Products Ltd., the country’s largest sportswear company, has made a firm offer to buy Finland’s Amer Sports OYJ for 4.6 billion euros ($5.2 billion) in an all-cash deal.

Once the acquisition is completed, Anta will control a 57.95% stake in Amer, with 20.65% by Anamered Investments, 15.77% by FountainVest and 5.63% by Tencent, Anta announced Friday in a statement.

The 40-euro-per-share offer represents a premium of 39% to Amer’s closing price before Sept. 11, when the initial, nonbinding acquisition proposal was first disclosed. Amer’s stock jumped nearly 19% on Sept. 11 immediately after the news.

The offer is expected to start from Dec. 20 and last about 10 weeks, and the deal is expected to close by the end of the second quarter of 2019. Amer said on Friday that its board has unanimously recommended shareholders accept the deal.

This is the second-largest acquisition of a Finnish company by Chinese investors. In 2016, a consortium led by Tencent took over an 84.3% stake in Finnish mobile game company Supercell Oy from Japan’s Softbank Group Corp. for $8.6 billion.

Anta said Amer will continue to operate independently from Anta, with a separate board of directors. The consortium has also invited Amer CEO Heikki Takala to continue as head of the company, and the Amer’s headquarters will stay in Helsinki.

In an internal letter to Anta’s employees, company Chairman and CEO Ding Shizhong said the acquisition is the most important decision he has ever made since he founded the company in 1994.

Amer’s products would bolster Anta’s offering ahead of the Beijing 2022 Winter Olympics, Ding said. Anta, a long-time Olympic sponsor and the current supplier for the Chinese National Olympic team, is the official partner of sports apparel for the 2022 Games.

With a market cap over HK$100 billion ($12.80 billion), Hong Kong-listed Anta is China’s largest sportswear brand and the third-largest in the world by market cap. The Fujian-province-based company posted a net profit of 1.9 billion yuan ($276 million) in the first half of 2019, a 34% growth over the prior year. Its revenue grew 44% to 10.6 billion yuan.

The company’s flagship Anta brand mainly targets the lower-priced market, with most products in the price range of 100 to 300 yuan, but it has been seeking expansion into high-end segments by acquiring other well-establish global brands. It acquired the rights to the Fila brand in China in 2009 and the Japanese winter-sports brand Descente in 2016. Last year, Anta bought the rights to Hong Kong high-end children’s clothing brand King Kow. It also established a joint venture with South Korean outdoor sports activity brand Kolon Sport.

The Amer deal is mostly viewed as positive since Anta is more profitable and has grown faster than Amer.