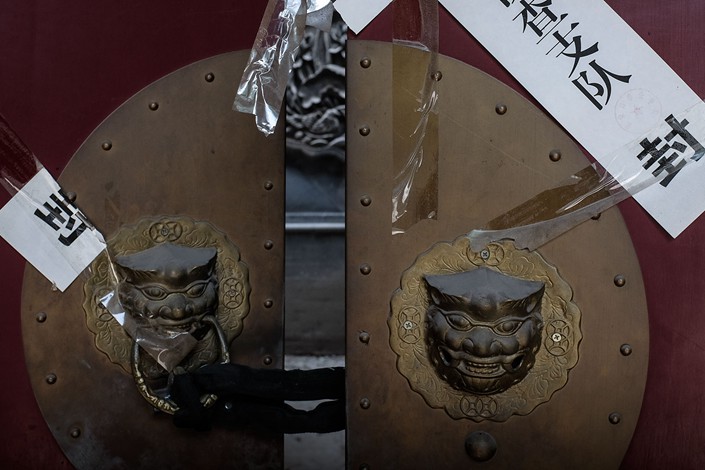 A sealed doorway, part of a corruption investigation, in Beijing in June 2016. Photo: Liu Xingzhe for Sixth Tone

The scale of China’s ongoing anti-corruption campaign defies simple description. Over the past six years, more than 1.5 million officials have been sanctioned as part of the crackdown, ranging from village committee members to some of the country’s most powerful bureaucrats. The past four Party secretaries of the major southwestern city of Kunming have been arrested, while the eastern city of Nanjing has lost two mayors and a Party chief of its own. The southwestern megacity of Chongqing has seen so many once-promising high-ranking officials caught up in the dragnet that some now joke that the city is ‘cursed.’

The sums involved are equally staggering. But while it may not come as a surprise to ordinary Chinese that high-ranking bureaucrats like Zhang Shuguang — the former deputy chief engineer of the country’s now-defunct Ministry of Railways — or his associate and former boss, Liu Zhijun, leveraged their power to extract 47 million yuan ($7.7 million) and 64 million yuan in bribes, respectively, some have expressed shock at just how much even low-level officials were able to steal. In one instance, Chen Wanshou, a village accountant from Beijing, was found guilty of embezzling 119 million yuan from state coffers. Chen's is just one of a number of high profile “little official, big graft” cases to have attracted widespread public attention and reprobation.

Reading through these reports, I grew curious whether the “little official, big graft” phenomenon was truly as serious as it seemed, and if any government departments — such as the little-mourned Ministry of Railways — really were more susceptible to corruption than others. Data related to the campaign can be hard to find, since the government does not publicly release information related to every corruption case, but by working with the data that is available, I believe it’s possible to get a better idea of the scale and distribution of corruption activities around the country. From there, we can come to a better understanding of how power and loose oversight can combine to corrupt so many Chinese officials.

One of the best sources of information on China’s anti-corruption campaign is the China Judgements Online database, a state-run repository of legal decisions. To begin, I downloaded every ruling related to bribery and graft published on the site since the campaign’s launch in 2012 — about 23,000 files. After eliminating rulings that did not contain detailed information on the sums taken, as well as those with errors, duplicate rulings, rulings that had been overturned on appeal, and other unusable files, I eventually whittled the number of cases down to about 7,300.

Looking through what remained, the first thing that stood out to me was that the average amount taken was skewed by a few high-profile cases, such as Zhang Shuguang’s. The 7,300 officials whose cases I examined took an average of 318,000 yuan, but the median sum was much lower — just 56,800 yuan. In other words, most officials who’ve been found guilty of corruption were convicted for taking relatively paltry sums. In fact, some didn’t make any money at all from their activities: There were several cases I studied in which officials were tried for their roles in corruption rings, even though they themselves received no direct financial benefit.

It was also immediately clear that the median value of bribery cases was far greater than the median value of graft cases. Due to the nature of Chinese government finances, the amount of money officials can access and directly embezzle is limited — with some exceptions that I will later discuss — whereas pay-to-play deals offer far greater scope for illicit activity. The latter are also harder to detect and allow corrupt officials to funnel money to associates as well as themselves.

Delving deeper, I looked at the case files geographically, to see if I could discern any patterns. I discovered that, apart from northeastern China, the median sum taken by corrupt officials did not vary widely by region. Although the median corrupt official serving in the economically more prosperous eastern parts of the country did make off with slightly more than his or her counterparts in central or western China, the difference was not particularly large. According to the available data, the median amount of bribes taken by officials in eastern China was just 3% higher than in central China, and just 12% higher than in the country’s significantly poorer western regions.

This is in part because of how I structured my study, which focused on medians, as opposed to averages. Despite sensationalist media coverage, most reported cases of embezzlement and bribery involve low-level officials taking small sums of money. While corruption is determined by broader regional and economic factors, at the grassroots level, the difference is perhaps not as large as one might expect.

I was also interested to find that the median reported corruption figure in northeastern China is significantly lower than it is elsewhere in the country — even the western provinces. While determining the reason for this will require additional research, it likely has something to do with deteriorating economic conditions in an area known as China’s Rust Belt.

Less surprising is the fact that the sums taken tend to get larger as officials move up through the ranks. High-ranking officials also tend to profit far more from bribes than embezzlement. Power has a price, it would seem. At lower levels of government, the median embezzler took 7% less than the median bribe-taker. For those working at the prefecture-level or higher, however, taking kickbacks is apparently a more lucrative option than embezzling the money themselves: At this level, the median bribery case involved sums 40% larger than the median embezzlement case.

Meanwhile, the highest-ranking officials whose cases I studied took far more than their counterparts even just one administrative level down: The median corrupt prefecture- or bureau-level official was convicted for taking sums more than twice as large as the median district or county official. And while a small number of “little official, big graft” cases have nabbed headlines, more than half of village- and neighborhood-level officials made less than 30,000 yuan ($4,300) off their illicit activities, whether in bribes or through embezzlement. This suggests that the phenomenon of high-value grassroots-level corruption is overblown.

In addition to administrative rank, opportunities for illicit activity also vary by department. Prior to the crackdown, certain bureaus and positions were so widely known for corruption that they were called feichai — or, “fat jobs.” Feichai is a catchall term for any lucrative office that grants its holder the power to allocate resources with little oversight.

To get an idea of which fields were home to the largest concentrations of feichai, I split the officials whose cases I studied into 21 broad categories, according to their position. Unsurprisingly, I found that the sums taken by officials who worked in finance, or who were involved in real estate or urban planning deals, were by far the highest. The median amount taken in financial cases was three to four times higher than the overall median. Financial officials were also among the few types of officials to profit primarily from embezzlement, since they had access to more government funds. Those working in state-owned enterprises, along with most other types of officials, tended to profit more often from bribes.

As the anti-corruption campaign enters its seventh year, it shows few signs of letting up. But while punishing corrupt officials is always a popular move, prevention may be the best medicine. Research into how corruption takes place in China can help point anti-graft watchdogs in the right direction by indicating which fields and positions pose the greatest threat to the country’s economic and political stability, and therefore require greater vigilance and regulation. If official corruption in China is to be reined in, we must first understand how it works.

Li Hui is an associate professor of political science at the School of International Relations and Public Affairs at Fudan University.