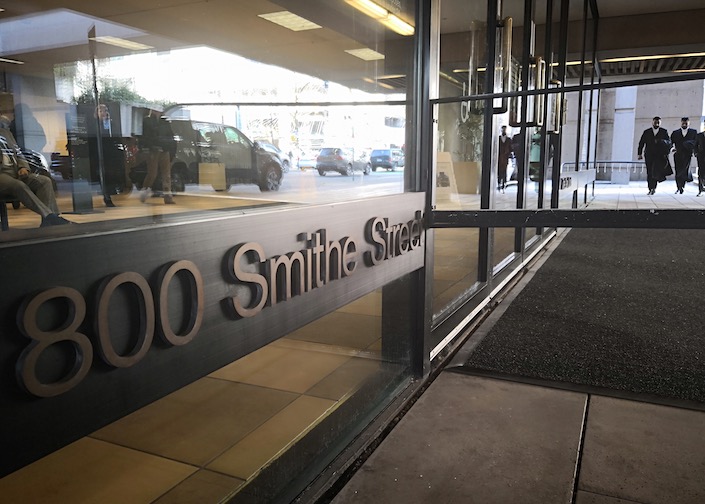 Meng Wanzhou, the chief financial officer of Huawei Technologies Co. Ltd., was granted bail by a Canadian court after a three-day hearing that followed her arrest in Vancouver at the request of U.S. authorities.

Justice William Ehrcke, presiding judge of the Supreme Court of British Columbia, ruled Tuesday afternoon that Meng could be released on a Can$10 million ($7.5 million) surety, including a cash deposit of Can$7 million, and on the condition that she remain in Vancouver, where she owns two homes, while she awaits extradition proceedings on U.S. fraud charges.

Meng could be released today if the documentation and cash is produced, the judge said.

The bail hearing for Meng Wanzhou, the chief financial officer of Huawei, has taken up three court days since Friday. She has been held at the Alouette Correctional Centre for Women since her arrest Dec. 1 at Vancouver International Airport.

During Monday’s hearing, Meng’s lawyer proposed bail conditions including an electronic monitoring bracelet, travel restrictions and round-the-clock surveillance for Meng’s release. Crown counsel countered that Meng is a flight risk with “access to vast resources and connections"and no meaningful connection to Vancouver or Canada.

A main point of contention was whether Meng’s husband, Liu Xiaozong, could act as the custodian for her bail. Judge noted that Liu is not a Canadian resident and holds a visitor visa which allows him to stay in the country for six months. Liu offered to post C$15 million ($11 million) of cash and real estate as surety.

The hearing resumed Tuesday at 10:00 a.m. local time in Vancouver.

The judge said he is satisfied with the defense team's submissions for Meng’s release.

Judge said Meng may be released from custody after posting bail of Can$10 million ($7.5 million), including a cash deposit of Can$7 million.

The judge said he is satisfied that Meng has only two valid passports. Her lawyers have promised that she will surrender both of them.

The judge also said the allegation that Meng has been avoiding travel to the U.S. due to the investigation is speculative, and he does not give it much weight.

The hearing resumed after the lunch break, and the judge summarized facts of the case before announcing the decision.

The judge said Meng was arrested on a provisional warrant, and the U.S. has not yet completed documentation on its official extradition request. The U.S. has 60 days to submit a formal request for extradition.

The judge also went over the allegations against Meng, who is accused for fraud and deceiving banks about the relationship between Huawei and unofficial subsidiary SkyCom in order to conduct business in Iran.

The judge said Meng has no criminal record in China nor anywhere else, and added that she has various health problems.

Lawyers from both side ended their arguments. The judge said he will give "oral reasons" — the justification for the judgment — after the lunch break. A ruling is likely at 2 p.m. local time.

The crown counsel, a federal prosecutor representing the Attorney General of Canada, reiterated the opposition to Meng’s bail and suggested that Meng’s husband, Liu, is not suitable for the role of custodian, given Liu’s visa status and the close relationship of the couple. Crown said Liu should be excluded from any potential release order.

The judge asked if the amount of Meng's bail could be reduced to less than Can$15 million if Liu were to be removed as surety. Crown said the amount "needs to be significant."

Meng’s lawyer said there is precedent for having mutiple sureties if the primary surety is not a resident of Canada. Meng’s husband, Liu Xiaozong, is not a resident of Canada and is holding a visitor visa that will expire next year. Lawyer said that theoretically, Liu could extend his stay in Canada until 2024 by renewing his temporary-residency status.

The hearing opened with a discussion of Meng Wanzhou’s surety, a sticking point in the hearing Monday. Meng’s lawyer suggested alternative surety arrangements instead of the proposal involving Meng's husband.

Meng's real estate agent, who helped the couple with their home purchases, is one proposed surety — a guarantor or custodian who would be responsible for ensuring she meets bail terms. Four other people are also proposed to act as Meng’s sureties and pledge their assets for Meng’s bail, according to Meng’s lawyer. The people include an insurance agent who worked with her at Huawei, a homemaker whose husband worked at Huawei and a yoga instructor who is a neighbor of Meng.

The new sureties altogether offered to pledge Can$3.2 million — mostly in properties — for Meng’s bail.