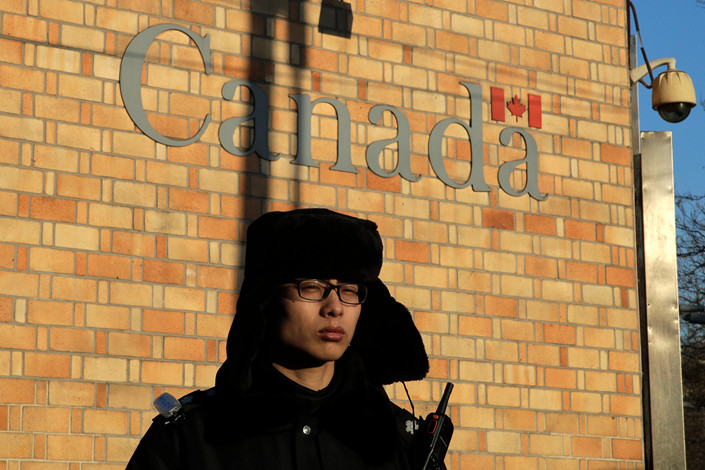 A policeman stands watch outside the Canadian Embassy in Beijing on Dec. 12. Photo: IC

Canada says a second person has been questioned by Chinese authorities while the Chinese media reported a Canadian is being investigated in a city near the North Korean border, further heightening tensions between the two countries after the arrest of a former diplomat in Beijing and the detention of a Huawei Technologies Co. Ltd. executive in Vancouver.

The second person reached out to the Canadian government after being questioned by Chinese officials, Foreign Minister Chrystia Freeland said, adding Canada has since lost contact with the person.

“We haven’t been able to make contact with him since he let us know about this,” Freeland told reporters Wednesday in Ottawa. “We are working very hard to ascertain his whereabouts and we have also raised this case with Chinese authorities.”

The Globe and Mail identified the man as Michael Spavor, a Canadian whose company brings tourists and hockey players into North Korea. He gained fame for helping arrange a visit to Pyongyang by former NBA player Dennis Rodman, and he met North Korean leader Kim Jong Un on that trip, the newspaper reported.

Calls to both of Spavor’s contact numbers in China, as well as his North Korean number, went straight to voicemail. Canada’s foreign affairs department didn’t immediately respond after regular business hours to a request to confirm the identity of the second person.

A report from the Northeast China News, an official local online news portal, said Spavor had come under investigation on Monday by the local national security bureau in Dandong, a city in Northeast China’s Liaoning province, for suspected activities that “jeopardize national security.” Dandong is on the Chinese side of the border with North Korea.

Canada has asked to see the former envoy after it was informed by fax of his arrest, according to a government official briefing reporters in Ottawa. Canada doesn’t know where Kovrig is, and isn’t aware of the charges he faces, the official said.

Chinese media say Kovrig was arrested as part of a national security case. Kovrig, who works for the Brussels-based International Crisis Group, is on leave from his position in Freeland’s department.

“Michael did not engage in illegal activities nor did he do anything that endangered Chinese national security,” Rob Malley, chief executive officer of the ICG, said in a written statement. “He was doing what all Crisis Group analysts do: undertaking objective and impartial research.”

Kovrig may have been caught up in recent rule changes in China that affect non-governmental organizations. The ICG wasn’t authorized to do work in China, Foreign Ministry Spokesperson Lu Kang said during a regular press briefing in Beijing Wednesday.

“We welcome foreign travelers. But if they engage in activities that clearly violate Chinese laws and regulations, then it is totally another story,” he said, adding he had no information on Kovrig specifically.

Foreign non-governmental organizations are required to register with the Chinese authorities under a 2017 law that subjects them to stringent reporting requirements. Under the law, organizations without a representative office in China must have a government sponsor and a local cooperative partner before conducting activities.

ICG says this is the first time they’ve heard such an accusation from the Chinese authorities in a decade of working with the country. The company closed its Beijing operations in December 2016 because of the new Chinese law, according to a statement. Kovrig was working out of the Hong Kong office.

Trudeau’s government has distanced itself from Meng’s case, saying it can’t interfere with the courts, but is closely involved in advocating on Kovrig’s behalf.

Foreign Minister Freeland declined to speculate on whether there was a connection between the Kovrig and Meng cases. Canadian Trade Minister Jim Carr also said Wednesday there’s no indication the cases are related.

Guy Saint-Jacques, who served as ambassador to China from 2012 to 2016 and worked with Kovrig, says the link is clear. “There’s no coincidence with China,” he said in an interview.

“In this case, they couldn’t grab a Canadian diplomat because this would have created a major diplomatic incident,” he said. “Going after him I think was their way to send a message to the Canadian government and to put pressure.”

Meng was granted bail late Tuesday, but that hasn’t placated China. “The Canadian side should correct its mistakes and release Ms. Meng Wanzhou immediately,” said Lu, the foreign ministry spokesman.

The tension may force Canadian companies to reconsider travel to China, and executives traveling to the Asian country will need to exercise extra caution, said Andy Chan, managing partner at Miller Thomson LLP in Vaughan, Ontario.

“Canadian business needs to look at and balance the reasons for the travel’’ between the business case and the “current political environment,’’ Chan said by email. Chinese officials may subject business travelers to extra screening and in some case reject them from entering, he said.