Many Masters, Few Disciples: The Dying Traditions of Chinese Acrobatics 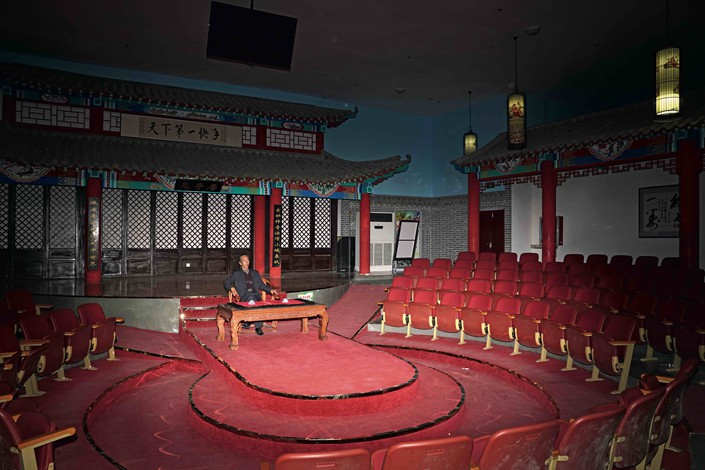 Wang Baohe, who claims to have “the world’s quickest hands,” sits exhausted in the “Ghost House” of Wuqiao Acrobatics World after back-to-back performances. His son Wang Ligang has his own unique skills, but there is no one to carry on Wang Baohe’s “bone-shrinking” trick. The trick is likely to be lost forever. Oct. 28, 2018. Photo: Cai Yingli/Caixin

In 1913, the Tianqiao (Bridge of Heaven) area of Beijing, west of the Temple of Heaven, developed into a market. Amid specialty shops selling imported goods and tea houses, there were also myriad traveling artists performing martial arts — and acrobatics. The artists could scrape a living performing on the streets at Tianqiao, but would later return to their hometowns. Many of the acrobats were from Wuqiao, a county in Hebei province 180 miles south of Beijing. Former Chinese Premier Zhou Enlai, who regularly met performers trained in Wuqiao during his overseas travels, declared it worthy of the title: “The home of Chinese acrobatics.”

Cultural markets like Tianqiao are no more. Since their demise, later generations of traveling acrobats and artists have found work as professional performers back in Wuqiao Acrobatics World. But they too are a dying breed.

Amid China’s development and the diversification of society and the economy, pay for acrobats has lagged far behind those in other professions. Young people are put off by the intense and often painful training required, and older artists with such unique skills now find themselves with no disciples to teach.

No one to carry on the tradition

“I used these three balls to bring Wuqiao’s acrobatics to the world,” Wang Baohe says during each performance. Wang is a famous retired acrobat who became a magician when he retired. The “Ghost Hand Theater” was built especially for him — his performance halls are his various honors. What made him famous was his “Three Immortals into a Cave” trick — he puts two balls under two small bowls, hiding one in his hand, and invites the audience to guess which bowl has the ball under it. Using sleight-of-hand and impossibly quick movements, he fools the audience, provoking a mix of delight and frustration. Wang says that fundamentally, there is no secret method — it’s about speed. At 74, he has many pupils — his son Wang Ligang was the best, but his performances are not yet up to scratch.

“At first I searched in Yunnan, Guizhou and Sichuan to find a pupil who could do the bone-shrinking trick, but couldn’t find any suitable candidates,” Wang Baohe said. “In order to do the trick, you must dislocate and relocate certain joints. There are very few people with such physical qualifications.”

Wang’s “bone-shrinking” ability was inherited — his grandfather Wang Yulin was a famous acrobat in the early 20th century who performed at Tianqiao as one of the legendary “Eight Great Strange Performers” for many years. When Wang was 6, he began learning how to do the bone-shrinking trick. His father would dislocate and relocate his joints one by one, four or five times each time they practiced. The pain was unbearable. But now, Wang can’t help but sigh. “Young people now don’t study the right way. One must go through this bitterness,” he says.

Ma Ruijin’s grandfather was also a performer at Tianqiao in Beijing. When he was small, he would travel around the world with his grandfather, drifting to wherever his uncle’s performances would earn money. He returned to Wuqiao to put on a show involving monkeys, five of which he trained himself. The oldest monkey, “Boss Monkey,” has been with Ma for many years and is so human-like that he and Ma have a relationship akin to father and son. After being bitten by a monkey as a teenager, Ma’s actual son became afraid of the animals and later left Wuqiao to became a monk.

But there is no one to continue Ma’s monkey trick. A few years ago, one child wanted to study, but Ma required the approval of the boy’s parents. There were formal discussions, but Ma never heard back. As a result, Ma believes that in the eyes of the audience, training monkeys takes the least skill of any acrobatics show. And the monkeys aren’t cheap, leaving even fewer people willing to learn.

In the 1980s and 1990s Wuqiao had 22 acrobatic schools with more than 1,800 students. With economic and social development, people’s lives improved and fewer parents chose to send their children to such places, forcing many into ruin. Year after year, enrolments at the public acrobatics school in Wuqiao have dropped. According to one teacher, many of the students are now from elsewhere in China, sent to learn acrobatics to escape poverty — or as a punishment.

Wuqiao County is quiet at night. On both sides of the central road in town, there are several acrobatics prop shops scattered around. Madame Ji, the owner of one, says acrobats from Wuqiao travel all over the country at the beginning or end of the year to make a living. Her sister goes too. But meager performance salaries are making it harder to make ends meet, and many have been forced to find other ways to make money in their spare time. One young acrobat, Tiantian, has been performing in traveling tent shows for half-month stints, giving one performance per day. “Nowadays it’s too easy for the professional acrobats to travel around,” he said. The other acrobats in his circle of friends often complain about the hard work.

Sun Tingting has also performed around the country. After she had her daughter, she found a job at Wuqiao Acrobatic World. Beaming, she talked about how her 3-year-old fearlessly stands on her parents’ shoulders. Regarding her daughter’s future, Sun said: “Whether she does acrobatics or studies, I hope she is outstanding. Once she grows up, she can choose for herself.” Her husband, Li Xin, has an account on a livestreaming app, but the account does not have many fans.

He Shusen and He Yingzi, who are brother and sister, have a lively show at Acrobatics World called “Blow Through the Sky.” The show is loud, and they get the whole audience to yell together. They inhale cigarette smoke through their mouths, blowing it out through traditional Chinese horns placed in their nostrils. During their performance, they also sell small flutes and other souvenirs. Each show, there is never a shortage of audience members willing to buy them. They also have popular accounts on livestreaming platforms.

Growing living standards have brought higher audience expectations. Said Wang Baohe, “Those acrobats with deformities or unique skills in the Tianqiao era hoped to gain sympathy and pity from the audience in exchange for a little money to earn a living. It’s quite different now.” In the era of modern stage shows, acrobatic performances have been forced to adapt to the times.

Every Saturday afternoon, the Wuqiao Arts Center has a large acrobatics performance. The performance troupe there has performed around the world, representing Wuqiao and China. But during the first 10 minutes of the show, the 800-plus audience members play on their smartphones and sleep.