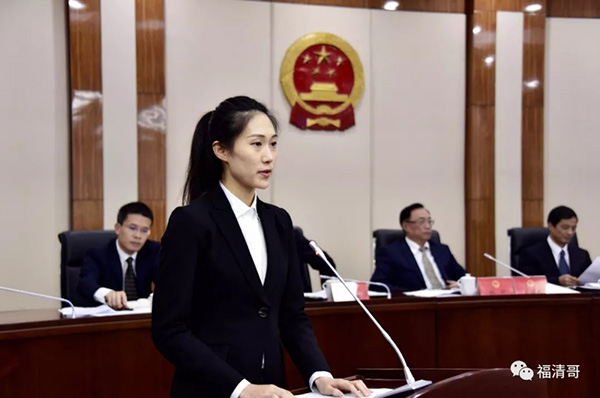 The rare appointment of a young woman as deputy mayor of a Chinese city has gone viral, attracting social media scrutiny as well as calls for more female representation in politics.

She was elected to the position by the Fuqing people's congress, according to a report by local media.

Born in 1990, Yuan has a bachelor and a master degree from Rice University in the U.S.

Her appointment delighted many social media users, as China has few female leaders in politics. The country has never had a female president and less than a quarter of the current members of the country’s top legislature, the National People’s Congress, are women.

A comment from user “peach-rilak,” which received more than 10,000 likes, said: “ Support. Hope more woman can get into politics.”

But others commented on Yuan's appearance and questioned her qualifications.

Some asked how someone so young, with so little work experience, could be appointed to such a position.

One user, playing on the similarity between the words for "nurse" and "deputy" in Fujian-accented Chinese, said that when she heard the news from a colleague, she thought "this pretty woman was Fuqing city's head nurse."

"I had to hear it at least five times before I understood why my colleague thought this woman was so impressive," the user said.

"With her high cheek bones, she gives people a sense of a strong woman," one man who described himself as a "divination" expert posted, in an analysis of Yuan's personality. But, "because her business spirit is too strong, she frequently cannot attend to her other half's feelings, and will have more difficulty managing a household and marriage."

The discussion got so heated that some people began debating whether the public's surprised reaction was sexist, or really just focused on Yuan's youth and inexperience.

"Now that a woman can be a deputy mayor they say it's because of her connections," SYgegewu wrote. "Isn't this very normal overseas?"

SYGegewu's commenters insisted Yuan's gender had nothing to do with the uproar.

In response to the online debate, the local government has now clarified that Yuan was appointed to the position as part of a ten-month internship program run by Peking University and is not a permanent office-bearer.

Related: How Bad Is Sexism in the Chinese Workplace?