Apple Priced Itself Out of Shrinking Chinese Smartphone Market 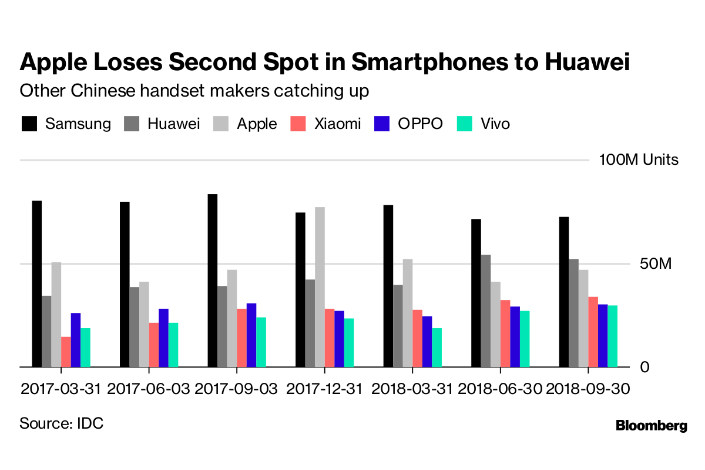 (Bloomberg) — Apple Inc.’s falloff in demand for iPhones in China shows the company’s flagship product is hurt by its high price and the rise of cheaper, more comparable rival devices in the world’s biggest market.

The company cited struggling iPhone sales in China when it cut its quarterly revenue forecast on Wednesday for the first time in almost two decades. Chief Executive Officer Tim Cook said a number of factors contributed to the revised outlook for the holiday period, including the strength of the dollar, fewer subsidies from phone service providers and existing customers sticking with older models via cheaper battery replacements. He didn’t mention that Apple had priced its new models at stratospheric levels.

The iPhone XS Max, the current top of the iPhone range, starts at 9,599 yuan ($1,400) in China. Flagship phones from Huawei Technologies Co. Ltd. and Oppo cost from 4,000 yuan to 5,000 yuan, around half that of an iPhone. Some of Vivo’s entry level smartphones cost a quarter of the price. Even Apple’s iPhone XR, which was supposed to be a lower-cost alternative to the high-end iPhones, costs about 1,000 yuan more than a competing device.

The average monthly white-collar salary in China was 7,850 yuan in the third quarter of 2018, meaning that most new iPhones cost more than a month of work, according to a research report from Zhaopin Ltd., a Chinese recruiting and job placement company.

Beyond pricing, some consumers in China have fled to competitors like Huawei’s phones for their combination of unique back covers and camera systems, and upstarts like OnePlus because of its speed. In announcing the new forecast, Cook said the Chinese smartphone market is contracting and noted that foot traffic to Apple retail stores has been down in recent months.

Apple has recognized its pricing in China may be too high, expanding a recent iPhone trade-in promotion from the U.S. to the region at the end of December. On its website in China, Apple now advertises the iPhone XR for 4,399 yuan with the trade-in of an iPhone 7 Plus.