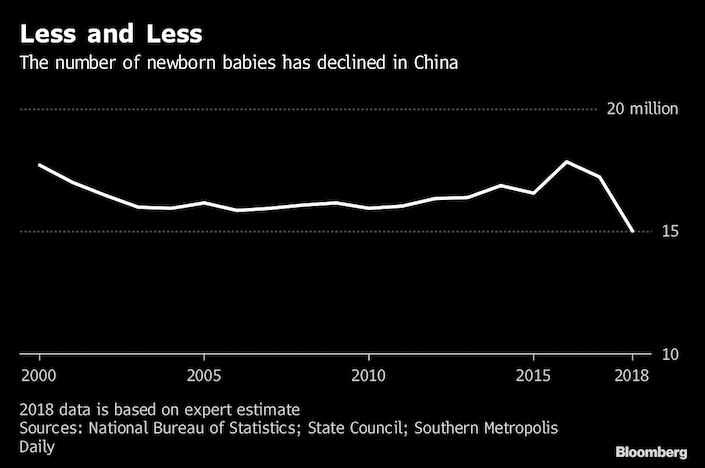 Weeks before China will release its official birth figures for 2018, a demographer’s estimate of fewer than 15 million new births has sparked discussion on social media, underscoring growth concerns gripping the world’s second-largest economy.

Beijing-based China Times newspaper reported on Dec. 25 that the annual number of births was expected to drop by as much as 2 million -- possibly below 15 million -- citing two demographers. The forecast was circulated on social-media platforms including Weibo, leading users to question if policy makers had been too optimistic in assuming a baby boom would follow a loosening of China’s restrictive birth limits in 2016.

In August, China’s parliament removed “family planning” policies from the latest draft of a revised civil code slated for adoption in 2020, a signal population control measures would eventually be eliminated. The State Council, China’s cabinet, has commissioned research on the repercussions of ending the roughly four-decade-old policy and intends to enact the change nationwide, Bloomberg reported in May, citing people familiar with the matter.

“The two-child policy fell short of expectations, and the effect of accumulated fertility desires has faded,” China Evergrande Group’s chief economist Ren Zeping said on his official WeChat account on Tuesday, calling for an immediate end of birth limits to boost the fertility rate.

A figure of 15 million births would be the third-lowest total since the People’s Republic of China was founded in 1949, He Yafu, one of the demographers cited by China Times, told Bloomberg News. It would only exceed 1960 and 1961, when the country was hit by natural disasters and famine.

On Thursday, the Southern Metropolis Daily newspaper reported new births last year were expected to range from 15 million to 16 million, the lowest since 2011, citing an official researcher affiliated with the National Health Commission -- which sets China’s population policies. The National Health Commission didn’t reply to a fax seeking comment.

Demographic trends are weighing on President Xi Jinping’s efforts to develop China’s economy, driving up pension and health care costs and sending foreign companies looking elsewhere for labor. China’s State Council projected in 2017 that about one-quarter of its population would be 60 or older by 2030 -- compared with 13 percent in 2010.

“Is China the next Japan?” Weibo user Shengyin2011Gongguan asked. “Three years after the two-child policy, we still remember some experts once foresaw a baby-boom after the policy and even suggested making preparations to curb excessive population growth.”

Lining Up to Get Pregnant: The Unintended Victims of the Two-Child Rule

Why China's Gender Gap Is Growing