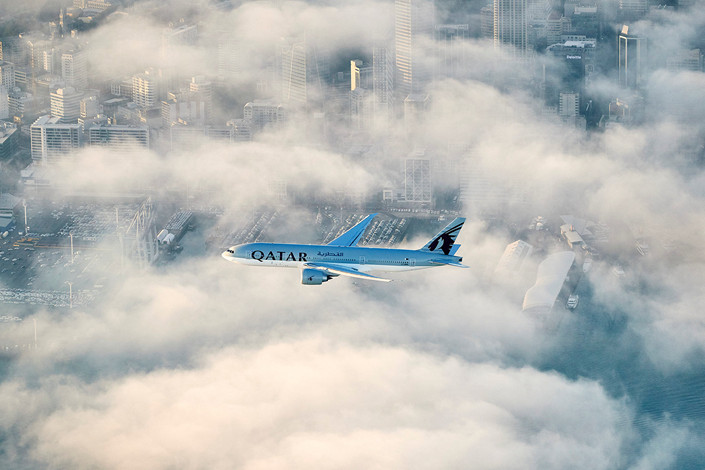 Qatar Airways Group announced Wednesday it had acquired a 5% stake in China Southern Airlines, making it the second-largest stakeholder in China’s largest airline.

The investment is Qatar Airways’ first major foray into the Chinese mainland, and follows its near 10% acquisition of Hong Kong-based Cathay Pacific in November 2017. It reflects the Persian Gulf-based carrier’s designs on a slice of the Chinese market after a diplomatic row left it blocked from flying to nearby Saudi Arabia and the United Arab Emirates (UAE).

The stock purchase, which Caixin estimates at between 3.4 billion yuan ($451.7 million) and 4.1 billion yuan, was all but complete before the disclosure. According to a filing released by the Chinese company, Qatar had quietly bought 430 million shares on the Shanghai Stock Exchange and 183 million shares in Hong Kong in the final months of 2018, bringing its total share of China Southern to a whisker under the 5% disclosure threshold mandated by Chinese law.

Qatar Airways, which is fully funded and owned by the Qatar government, is one of the Middle East’s three airline giants known as the ME3. It operates more than 200 planes.

The company has expanded aggressively in recent years through stock acquisitions. It now has a 20% stake in British Airways’ parent company International Consolidated Airlines Group SA, a 9.99% stake in Cathay Pacific Airways Ltd, a 10% stake in Chile’s LATAM Airlines Group S.A. and a 49% stake in Air Italy S.p.A.

China Southern said in a statement they were “sincerely thankful for the trust and support from Qatar Airways,” and suggested the company would seek to up its stake over the next 12 months. Qatar CEO Akbar Al Baker said the investment offered “massive potential” and “opportunities for us to work together and build a long-term relationship.”

Qatar’s earlier investment in Cathay Pacific did no such thing, however. A person close to the company who asked not to be named because they were disclosing private information told Caixin that Qatar had sought to sit on the board of the Hong Kong carrier — but was blocked by controlling shareholder Swire Group.

And that wasn’t the first time Qatar’s flagship carrier has faced resistance. In June 2017, when Qatar announced its intention to acquire 10% of American Airlines Inc., the U.S. company’s CEO Doug Parker responded that the move was “puzzling given our extremely public stance on the illegal subsidies that Qatar, Emirates and Etihad have all received over the years from their governments.

American Airlines announced in March 2017 that it had invested $200 million in China Southern Airlines as a strategic move to increase cooperation. The American company owns about 2.68% of China Southern and has an observer seat on its board.

“Qatar Airways’ business operation is under pressure as the country undergoes diplomatic difficulties, hence the Chinese market is now of vital importance for its strategic expansion, even its survival,” the above person who asked not to be named said.

Qatar Airways has been blocked from lucrative regional markets after Saudi Arabia, the UAE and Bahrain cut ties with the country in 2017 amid a diplomatic spat over the tiny oil- and gas-rich nation’s relationship with Iran and its alleged support for Islamic terror groups.