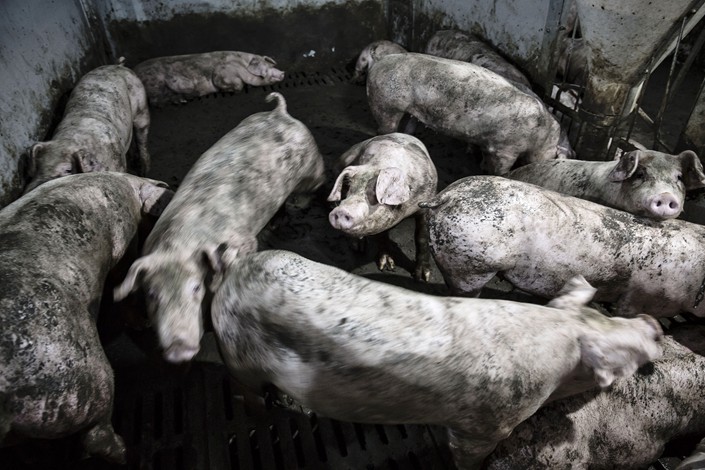 African swine fever has so far been detected in at least 23 provinces. Photo: Bloomberg

(Bloomberg) — It’s the time of year when Fu Haisheng should be thinking about restocking his herd of hogs.

With China’s Lunar New Year holiday just weeks away, the Heilongjiang province farmer would normally have sold most of his pigs to meet a surge in pork demand during the 15 days of feasts and festivities. His focus would now be on replenishing the stock.

But this isn’t a normal year in the world’s top pork-consuming country. Restrictions to stop the spread of African swine fever mean Fu’s collective farm has sold none of its 20,000 hogs. Once they’ve eventually been hawked at a discount or slaughtered, he says the farm may not replenish any at all.

It’s a predicament repeated across north and northeastern provinces, China’s pork-producing heartland. With some estimates that farms could cut back restocking by as much as 20%, the country will need to buy more from overseas, setting up for a turbulent Year of the Pig for the $128 billion industry.

“The risk of restocking is too high as long as African swine fever is around,” Fu said by phone from his farm. “Our hogs used to be sold to the south, now no hogs are allowed outside the province.”

The government is trying to contain the deadly disease, which began spreading in August and has so far been detected in at least 23 provinces, with Guangdong one of the latest hit. More than 600,000 pigs have been culled across the country, which slaughters about 700 million hogs a year.

While the disease isn’t known to harm humans, it can cause swine to die within days. The government has sought to stem the spread by restricting transport of live hogs outside affected provinces and controlling certain types of feed.

Heilongjiang accounted for 3% of the pigs slaughtered in 2017 and an outbreak was confirmed at a farm with about 73,000 hogs in the same county as Fu’s last week. Transport restrictions are also in place in other major producing provinces such as Henan and Liaoning.

It means farmers like Fu can’t get their hogs to the big demand centers in the south. Local abattoirs have limited capacity as breeders rush to slaughter their herds to avoid contamination. The only other option is to sell them off at a loss and risk going out of business, he said.

In a worst case scenario, farmers could end up cutting back stocks 2019 by 20%, or about 140 million hogs based on 2017 slaughter numbers, according to Rabobank.

“Some are unable to continue breeding due to huge losses while some have begun to cull breeding sows,” Pan Chenjun, a senior analyst with Rabobank in Hong Kong, said in an interview. It’s not just smaller farms like Fu’s which are under pressure. Larger farms may also scale back restocking, Pan said.

Pork prices have been hammered as farms increase slaughtering to avoid contamination, bolstering supply. By the middle of December, prices in northeast provinces had fallen 31% from a year earlier and 15% in the north, according to data published by the Ministry of Agriculture and Rural Affairs.

One of the country’s major hog breeders, Henan province’s Muyuan Foodstuff Co. Ltd. said in a filing this week that 2018 net profit could drop by as much as 79% after the disease interrupted transport of live hogs from major producing regions. Wens Foodstuffs Group Co. Ltd., another top pig breeder, said profit may shrink about 41%.

But the reduction in restocking could help prices turn around in the second half of the year as supply becomes constrained, according to Zhu Zengyong, a researcher at the Agriculture Information Institute of the Chinese Academy of Agricultural Sciences. It could also lead to an increase in pork purchases from overseas, according to both Zhu and Pan.

The China Meat Association agrees. Imports could reach a record this year as farmers fail to replenish their herds and keep breeding sow and piglet numbers low, Gao Guan, the vice president of the association, said in Beijing on Thursday.

“Many farms won’t dare to restock and some don’t even have the money to do it as sluggish prices have already hurt profits,” said Shen Yunxiang, the general manager of RICA Management Services (Zhangjiagang) Co. Ltd., a farm consultant. “Domestic pork supply may turn tight in the second half of the year and that may drive up prices.”