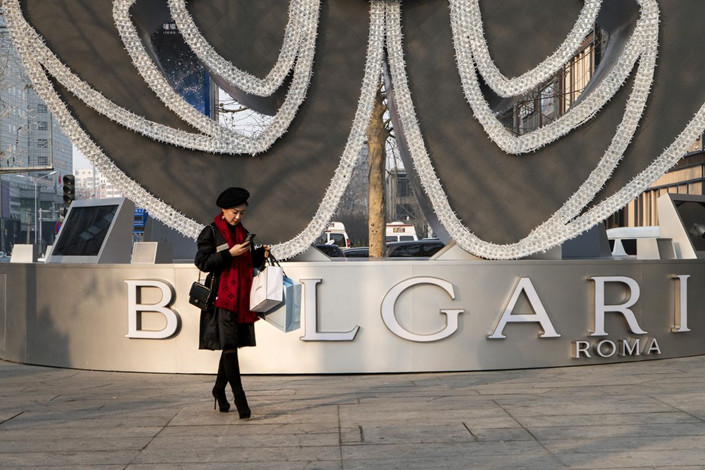 (Bloomberg) — About half of Chinese consumers say they’re planning to spend more on luxury purchases this year in a recent survey as concerns mount that the slowing and trade war-battered economy may dent demand in the key market for premium goods.

Weeks after Apple Inc. said that lower-than-expected Chinese demand is hurting earnings, a new survey of 1,385 affluent consumers by research firm CSG and public relations agency Ruder Finn showed that 46% of respondents in China and 32% in Hong Kong said they planned to spend more on luxury purchases this year compared to 2018.

While the results for China are in line with survey findings from a couple of years ago, CSG’s Executive Director Simon Tye said the trend showed a softening. “Over the last few years, we saw Chinese confidence going up and up,” he said. “For the first time in a long time, we are not seeing major growth sentiment in China.”

The global luxury industry has become increasingly reliant on China’s wealthy to drive growth and a perceived pullback in spending has been a consistent drag on luxury shares in recent months. The survey results signal some relief for makers of premium goods counting on China, which accounts for a third of the $1 trillion luxury market worldwide.

Richemont, the maker of Cartier necklaces and Piaget watches, had signaled in November that Chinese sales growth had slowed and trade disputes could dent it further. Its third quarter results last week, however, allayed some of those concerns.

“Affluent consumers are still optimistic, however the energy is a little bit duller this year,” Tye said.

The average Chinese shopper in the survey, conducted between Nov. 30 and Dec. 11, spent more than $35,000 on luxury goods last year, according to the report released Monday. In 2016, when the survey’s results were last announced publicly, 42% of Chinese shoppers said they would spend more on premium goods.

A sliding yuan and tightened government supervision of overseas purchases is also forcing luxury brands to rethink their strategies after years of relying on vacationing Chinese tourists in places like Paris and Dubai to prop up sales. Companies, from jeweler Tiffany & Co. to bespoke menswear brand Ermenegildo Zegna, are shifting to boost domestic sales in China.

Brands are also focusing on how to incorporate Chinese elements to gain attention locally: Burberry recently launched a Chinese New Year capsule collection and has a limited edition line sold only over WeChat, for example.

The necessity of paying attention to local sensibilities was brought home after Dolce & Gabbana faced a boycott in November for a marketing campaign and incendiary comments by co-founder Stefano Gabbana that were criticized by some Chinese consumers as racist. D&G items are still blocked on Chinese e-commerce platforms, two months after an apology from the designers.