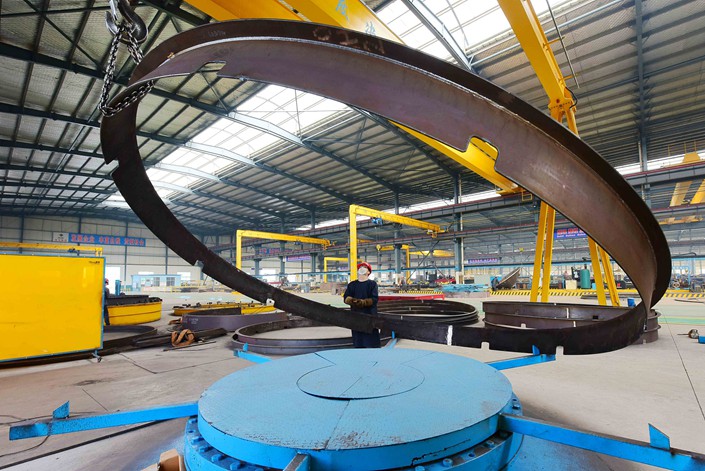 * The annual figure falls within Beijing’s projection of “around 6.5%,” as the country has been making efforts to shift from high-speed economic growth to high-quality growth

(Beijing) — China’s economy grew 6.6% last year amid sluggish domestic and foreign demand, down from a revised 6.8% growth rate in 2017 and marking the slowest annual expansion since 1990, official data showed Monday.

The slower growth came as the world’s second largest economy lost steam amid a debt-cutting campaign, a trade war with the U.S., and weak sentiment across the country.

China’s gross domestic product (GDP) grew 6.4% year-on-year in the fourth quarter of 2018, down from a 6.5% rise in the previous quarter and marking the third straight quarterly drop, according to data released by the National Bureau of Statistics (NBS). The latest reading was last seen in the first quarter of 2009, when the country was mired in the global financial crisis.

The GDP growth rates for the fourth quarter and full year are both in line with the median estimates of economists polled by Bloomberg.

“The data confirm a challenging period for China’s economy, with weakness discernible across different sectors,” Tom Rafferty, principal economist for China at the London-based Economist Intelligence Unit, said in a note.

Fixed-asset investment excluding rural households, a key driver of domestic demand, rose 5.9% for all of 2018, unchanged from the growth rate for the first 11 months, according to NBS data.

The property sector cooled further, with growth in investment in real estate development dipping to 9.5% last year, compared with a 9.7% increase over the January-November period.

Government-driven infrastructure investment, which includes spending on roads, railways and some other public facilities, rose 3.8% for 2018 as a whole, up from a 3.7% rise in the first 11 months, NBS data showed. The uptick was partly thanks to a recovery in local governments’ infrastructure spending in response to Beijing’s call to bolster the economy, multiple analysts said.

Retail sales, which include spending by governments, businesses and households, grew 8.2% year-on-year in December, edging up from an 8.1% rise the month before, NBS data showed.

Year-on-year growth in value-added industrial output, which measures production in factories, mines and utilities, picked up to 5.7% in December from November’s 5.4%.

“Conditions improved somewhat in December, but we expect the uptick in industrial output and consumer spending to prove short-lived,” Julian Evans-Pritchard, an economist at research firm Capital Economics, said in a note.

China’s annual GDP growth for the past year falls within Beijing’s projection of “around 6.5%,” as the country has been making efforts to shift from high-speed economic growth to high-quality growth and to rely less on investment. This is reflected in NBS data, which show that the contribution of final consumption expenditure to GDP growth reached 76.2% last year, up 18.6 percentage points from 2017.

"China’s economy is unlikely to experience a rebound similar to past business cycle expansions, with the dose of stimulus on this occasion set to be mild and investor confidence remaining quite fragile given the continuing U.S.-China trade frictions that we anticipate,” Rafferty said.

At the invitation of the U.S. side, Chinese Vice Premier Liu He will visit the U.S. for a new round of trade negotiations next week, according to China’s Ministry of Commerce.