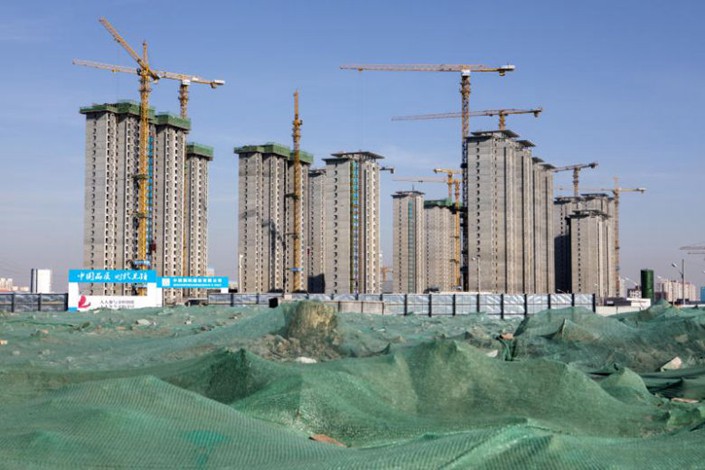 Buildings under construction are seen under a blue sky in Beijing on Jan. 17. Photo: Bloomberg

(Straits Times) — Blue skies in Beijing have become an increasingly common sight, a far cry from the days when roads had to be closed and planes grounded because of severe smog.

The striking change stems from China's efforts to fight air pollution, a fight that has brought about a drastic nationwide decrease in PM2.5 particulates — pollutants so fine they can enter a person's lungs and bloodstream.

But a new study by American and Chinese researchers has shown that China's progress in cleaning up its air might not be all it's made out to be, throwing up lessons for other cities battling smog.

The study, published in the Proceedings of the National Academy of Sciences journal in the United States earlier this month, was carried out by Harvard University's John A. Paulson School of Engineering and Applied Sciences and Nanjing University of Information Science and Technology.

It showed that even as PM2.5 levels plunged by as much as 40%, ground-level ozone has spiked.

Researchers say there is a cause-and-effect link between the two. While it is a hazardous pollutant, PM2.5 reacts with the precursors that produce ozone, preventing it from being formed, but its decrease is “speeding up ozone production.”

Ozone is produced when volatile organic compounds from burning fossil fuels are oxidized in sunlight in the presence of nitrogen oxides.

“Think of the (PM2.5) particles as sponges that scavenge the highly reactive chemical radicals, and prevent the chain of reactions producing ozone,” said Harvard Professor Daniel Jacob, one of the study's co-authors.

The researchers pored over air quality readings from about 1,000 sites across China, logged between 2013 and 2017.

In 2013, China started its “war” on air pollution. Since then, it has put in place a range of measures, from closing highly polluting plants to taking cars and trucks off the roads.

Professor Liao Hong from the Nanjing University of Information Science and Technology, another co-author, said they noted the “remarkable effect of PM2.5 on ozone” in the North China Plain, an area that includes Beijing and the industrial cities of Shijiazhuang and Tangshan.

PM2.5 concentrations there were the highest, but the area also registered the largest drop in the pollutants, said Liao.

While ozone in the atmosphere protects the Earth from harmful solar radiation, on the surface, it can damage people's lungs and affect crop yields.

The pollutant is one of six components of China's official air quality index, along with sulphur dioxide, nitrogen oxides, carbon monoxide, PM2.5 and larger airborne particles known as PM10.

It has come under increased focus in China's latest air pollution action plans, which aim to cut emissions of nitrogen oxides and volatile organic compounds by 2020.

“Because PM2.5 is harmful to human health, policies should still target it, but extra efforts are needed to reduce (nitrogen oxides) and volatile organic compounds emissions in order to control ozone pollution simultaneously,” said Liao.

The study's findings also bear lessons for countries battling air pollution; even as they curb levels of harmful particulates, measures should also be taken to control ozone levels.

“The same tug-of-war between ozone and PM2.5 is happening elsewhere. When you decrease PM2.5, ozone goes up. The reason it hasn't been noticed elsewhere is because PM2.5 has not been changing so fast,” said Jacob.