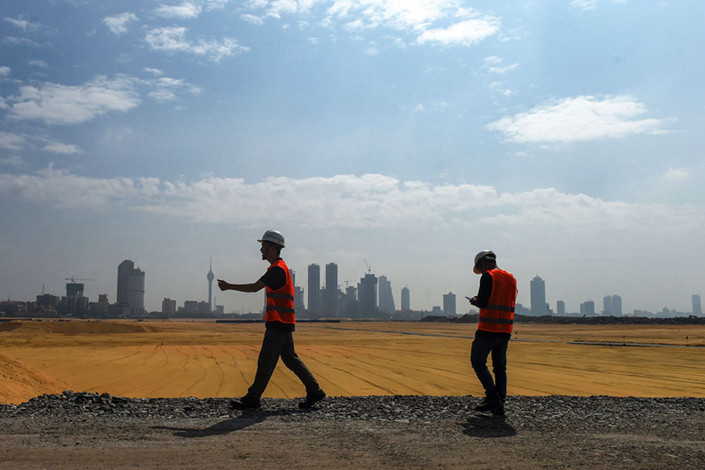 Chinese workers are seen on the construction site of a Chinese-funded $1.4 billion land reclamation project in Colombo International Financial City, formerly Colombo Port City, near Galle Face in Colombo, Sri Lanka, on Wednesday. Patali Champika Ranawaka, Sri Lanka’s minister of megapolis and western development, watched the final pumping of sand to create the 269-hectare (664.7-acre) tract to build what is being billed as South Asia’s most modern city. Photo: VCG

Geopolitics cannot be divorced from China's ambitious Belt and Road Initiative, but the mega project will create plenty of economic opportunities and growth for countries, said panelists at a World Economic Forum discussion in Davos, Switzerland yesterday.

And while current tensions between the world's two biggest economies, China and the United States, have rattled the rest of the globe, long-term infrastructural projects that are vital to connecting nations and driving free trade will continue at a rapid clip, they predicted.

It involves an estimated $1.5 trillion of Chinese investment across Asia alone in the next decade for infrastructure projects such as ports, industrial hubs, railways and roads.

While experts have also expressed worry over these developing countries' ability to repay the large debts they owe to China, not to mention fears over the East Asian giant's expanding geopolitical influence, the four panelists were upbeat on the benefits of the Belt and Road.

"Any kind of transportation project which connects countries will have a geopolitical background and positively influence geopolitical situations, stability and credibility because it creates interdependence," said Azerbaijan’s President Ilham Aliyev.

Singapore's Finance Minister Heng Swee Keat said the momentum of the initiative will not slow if countries support the vision of economic integration through building connectivity. "Geopolitics will have an impact on the pace and the international trading system, so it is important for us to push on and look for projects that are economically viable, bankable and have proper rules and regulations ... so you can show to the world that these are projects that have long-term benefits," he said.

"And we shouldn't let the current trade skirmishes end up affecting the longer-term objective of better integration for a better world."

The Belt and Road is a focal point in China's relationship with Singapore, which has been an early supporter of the mega project. The two countries have identified four major areas of cooperation: infrastructure connectivity, financial connectivity, joint collaboration to help other countries, and services to help resolve cross-border commercial disputes.

Heng said while it is easy to say that free trade will benefit all, in practice there will be winners and losers, and countries will have to restructure to keep up. "The underlying concept is we can all have a better life if we cooperate, but reaching there is not a given," he said, noting of the Belt and Road: "It's a serious vision which needs to be pursued vigorously."

Xu Niansha, chairman of Chinese state-owned Poly Group, which is primarily in the business of defense manufacturing sales, said China has come a long way in the past 40 years, and developing nations linked by Belt and Road share similarities with China's developmental path. "Therefore, it will be much easier to collaborate because of the similarities," he said.

Xiao Yaqing, chairman of China's State-owned Assets Supervision and Administration Commission, offered an assurance to firms eager to come on board, but facing pressures of trying to strike a balance between a long-term development vision and short-term rewards. "If you don't think you can strike that balance just yet, you can wait before participating in Belt and Road," he said from among the audience, when asked for his view on the subject by the panel's moderator.