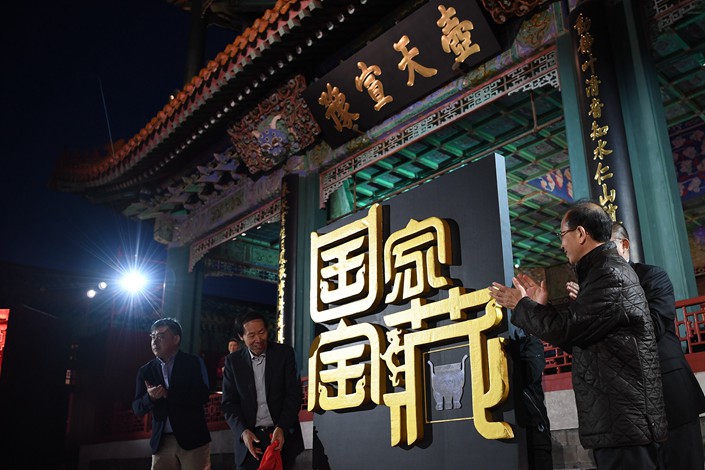 Producers of the TV show "National Treasures" unveil their logo at a press event. Photo: VCG

In the reality show “National Treasures,” spotlights shine on a dark stage, illuminating a semi-circle of wooden chairs. They are for the show’s contestants.

These contestants lack the charisma of aspiring singers or would-be celebrity chefs. Instead, they’re inanimate historical relics from China’s past.

China has gone from ‘smashing the four olds’ to putting them on a pedestal — literally. And it’s enlisting the endorsement of China’s star system towards that effort.

On “National Treasures,” experts examine and fawn over imperial relics and compare them to their contemporaries. Think “The Voice,” but for priceless Ming dynasty vases.

It sounds clunky, but young audiences have flocked to the show, which has been a roaring success since its 2017 debut. And more shows have followed. “Forbidden City: New Production,” takes celebrity endorsement to a new level by assigning popular heartthrobs “jobs” at Beijing’s renowned Palace Museum. The show follows them as they try to sell Forbidden City-themed merchandise — and, in turn, sell the image of the Palace Museum to viewers across the country.

“It is common for CCTV to use such a ‘celebrity effect’ in its entertainment programs that promote Chinese values and culture among young people,” says Dr. Jian Xu, a Chinese media expert at Australia’s Deakin University.

China’s cultural promotion efforts are nothing new, but the emergence of these shows and their progeny demonstrates the nation’s desire to shape a national conversation around its own history — and its willingness to take to new forms of media to do so.

At the same time that China is restricting the content allowed on reality shows, it’s promoting its own. As a result, a state-sanctioned historical narrative is reaching young people in China where they already are: on their phones and on livestreaming platforms. And if viewer numbers are any indication, it appears to be working.

Reality programming has been a fixture of Chinese TV for many years, but it exploded after 2017’s runaway hit “The Rap of China.”

The first season of the talent competition for would-be rappers garnered twice as many views as there are people in China. It fuelled a surge in the popularity of breakout Chinese hip-hop acts like Higher Brothers, and spinoffs related to hip-hop culture, such as streaming platforms iQiyi’s “Hot Blood Dance Crew,” and Youku’s “Street Dance of China.”

The same year that tattoos and street style began to take over TV, China’s State Administration of Press, Publication, Radio, Film and Television (SAPPRFT) cracked down on them — forcing rappers to apologize for dirty lyrics and cover up their tattoos on television.

“(SAPPRFT) had been tightening the regulations on reality shows that promote Western popular culture, such as ‘The Rap of China,’” he says. “In the meantime, SAPPRFT required TV stations to produce ‘ethics-building programs’ depicting traditional Chinese virtues, Chinese culture and history, and socialist values.”

SAPPRFT was subsumed into the National Radio and Television Administration in 2018.

“National Treasures” and “Forbidden City: New Production” are such “ethics-building programs,” and more are slated to follow. China’s Ministry of Culture and Tourism has also announced a major documentary to mark the Forbidden City’s 600-year anniversary in 2020, according to Sixth Tone.

The efforts are undeniably aimed at young people — the same demographic that gobbled up “The Rap of China.” “National Treasures,” for instance, sponsored selfie filters on picture app Meitu that made users look like they were sporting virtual imperial headgear in their photos.

“Forbidden City: New Production” streams on the same online platform as “The Rap of China,” and its cast features celebrities you could describe as xiaoxianrou, or “little fresh meat,” a slang term for feminine-seeming male stars who are popular with young women.

“From the success of the ‘National Treasures’ and the wide discussion about the show on Chinese social media, CCTV’s celebrity strategy in the ‘historical-cultural’ reality shows works really well,” Xu says.

But reality TV is just one modern medium for “ethics-building.”

Lucy Bao works to promote Chinese classical poetry to young people through their phones. With classical poetry, she says, “we can let people know the wisdom and dignity of the nation. We want people to cherish our own culture.”

Bao is the general director of the popular Chinese Poetry Writing Competition, a classical Chinese poetry contest whose final rounds were broadcast on TV. The app associated with the competition has 37 million downloads.

Bao sees similarities between her role promoting traditional poetry, and shows promoting history, in that they “can sometimes arouse (feelings of) national identity.”

To historians like Dr. Tobie Meyer-Fong, professor of history at Johns Hopkins University in the U.S., that’s precisely the point. These shows “reflect the high priority placed on historical memory as a site for the promotion of national identity in China today,” she tells Caixin.

In the early days of the People’s Republic, China sought to distance itself from imperial history, often literally — many people fled, taking relics with them to prevent their destruction in those turbulent years.

The animosity towards China’s history faded sometime after the death of Mao Zedong. Opening China up to the world, the Communist Party sought to legitimize itself by becoming the logical inheritor of China’s illustrious history.

Shows like “National Treasures” serve this narrative, according to Dr. Meyer-Fong. They are, she says, “consistent with the formulation of a national identity configured around the Communist Party as inheritor of a glorious Chinese past — rather than as an agent liberating the Chinese people from it.”

The modern format with which this message is presented, meanwhile, “presents the past as a site of consumption that can be identified with as both style and heritage,” she says — which may lend to its popularity.

“Nothing makes us feel like part of a nation more than being emotionally invested in our past,” says Dr. Gina Tam, an assistant professor of history. “Television and movies can really do that in a powerful way.”

Tam, who often shows Chinese reality shows to students in her classes at Texas’ Trinity University, cautions that “all countries want to inspire patriotism.” But in China, there’s one major difference. “The state in China has a lot more control over popular media than in most places.”