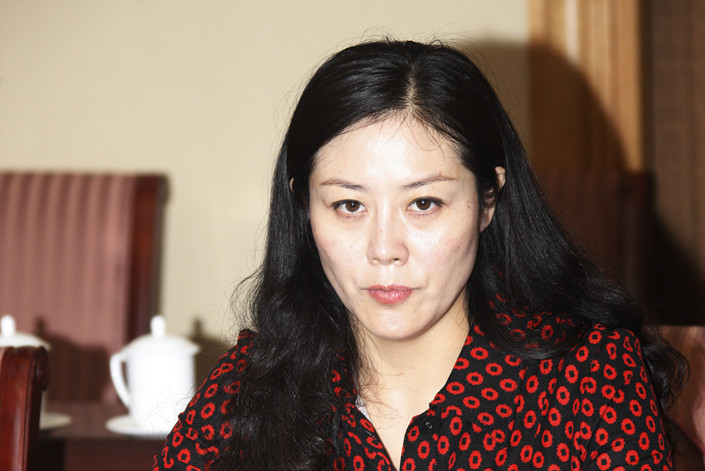 Jiang Baohong, the former vice mayor of Wuwei, Gansu province, is accused of having “improper interests such as trading sex for power.” Photo: VCG

On Jan. 21, two officials from the city of Wuwei in Northwest China’s Gansu province were arrested on corruption charges: former Vice Mayor Jiang Baohong, and her one-time superior, former Party Secretary Huo Ronggui. The two had been expelled from the Communist Party and removed from their posts 11 days earlier.

The Gansu Province Commission for Discipline Inspection released findings of an investigation into Jiang and Huo on Jan. 10. The findings said that during Jiang’s political career, she had “seriously violated political discipline,” falsified evidence, and accepted invitations to high-end banquets. The investigation alleged that she had accepted gifts that may have affected the fair execution of her official duties, and may have accepted bribes.

One of the accusations leveled against Jiang — having “improper interests such as trading sex for power and seeking promotion of positions” — are rare in reports of corruption. Throughout her career as an official in Gansu, there had been rumors that she used sex to obtain promotions, primarily through her relationship with Huo. But few of her university classmates would have expected her to engage in such behavior.

Jiang, who will be 45 this April, was born in a small city in the northeastern province of Heilongjiang. At 19, she began attending the Gansu Institute of Politics and Law. Jiang was taller than most of her female peers, her university professors and friends recalled, and her eyes were large and pretty.

According to one of her classmates, Jiang had an aura of innocence and spoke with a slight northeastern accent. She was a little like a ditsy older sister. “She didn’t really go out a lot, but a lot of people liked her,” said one classmate who wished to remain anonymous.

Her grades were average and she wasn’t supremely talented, but she joined the students’ union and the debate society. But one incident in 1997 allowed her classmates and professors to see her in a different light. On the eve of her graduation, she broke up with her boyfriend, who was “very good to her, did anything for her,” leaving him for one of her internship supervisors, who was married and more than a decade her senior. Many people judged her for this, and she cut off contact with most of her classmates.

After graduating, Jiang worked her way up to the Gansu Provincial Politics and Law Committee’s Leading Group on Social Stability, where she stayed for 10 years. According to people close to her at the time, Jiang often went to dinners where she would meet midlevel cadres.

“I realized that if there were higher-level cadres at the dinner, Jiang Baohong would come almost every time. If it was just a party with ordinary friends, she wasn’t interested,” said one person who knew her. She began appearing at dinners with officials who had higher and higher standing. She slowly removed herself from her original circle “because none of us could directly help her get a promotion,” a former acquaintance said.

While many of Jiang’s university classmates were also working in the Gansu judicial system, she moved up the ladder the fastest.

The end of the road

After 10 years working in the Gansu provincial capital of Lanzhou, Jiang left her position and went to the city of Wuwei to serve as the director of the local industry and commerce administration in January 2012.

Barely four years later, she had been promoted to municipal vice mayor, one of the most powerful positions in the city. In four years, she had held many positions in different bureaus, leaving behind the traces of an intentional, careful plan. All of this was the work of Huo.

Huo, now 56, had been Wuwei’s Communist Party secretary from 2010. Soon after Jiang’s arrival in Wuwei, rumors swirled about her relationship with Huo. It became an open secret among Wuwei officials that the two had an intimate relationship, and they did little to disguise it — after Huo was caught sleeping with other women, they were seen arguing.

A senior journalist based in Gansu said that Jiang wasn’t very good at her job — she had no intention of learning about her posts, nor did she work hard enough. During her tenure as the director of the Wuwei Development and Reform Commission, the local economic planner, Jiang was said to ask silly questions when inspecting the work of local departments. Sometimes people had to cover their faces to hide the fact that they were laughing at her. Huo often covered for Jiang.

Huo himself was famous among Gansu officials. He was known for his fierce temper, for physically abusing his colleagues and subordinates, and he had a terrible reputation. Photos of Huo’s watches were analyzed by people online, leading to questions about how he was able to afford such extravagant timepieces.

In 2017, Huo was dismissed from his post in Wuwei and resurfaced a few months later as the deputy director of the agriculture committee of the Gansu Provincial Political Consultative Conference. Barely a year later, it was announced that Huo was under investigation for corruption. Less than a month later, Jiang was also placed under investigation.

In its report on Huo, the Gansu Discipline Commission specifically referred to “engaging in transactions exchanging sex for power and maintaining long-term, unfair sexual relations with a number of women” — nearly identical to the report on Jiang.