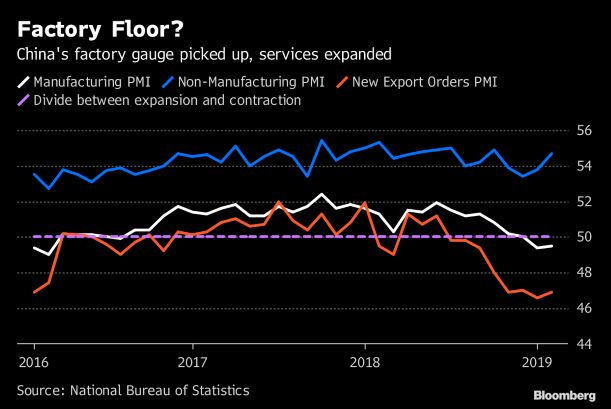 The first official gauge of China’s economy in 2019 showed conditions for factories continuing to worsen amid uncertainty over a U.S. trade deal, though with a slight improvement over the previous month.

• The manufacturing purchasing managers index rose to 49.5 in January from 49.4 in December, although it remained below the 50 mark that signifies contraction

• The gauge of new export orders rose to 46.9 from 46.6, indicating resilient external demand amid the trade war

• The non-manufacturing PMI, which reflects activity in the construction and services sectors, rose to 54.7, compared with 53.8 in December

• “January PMI was lifted by the front-loading of production before the Spring Festival and a relatively big issuance of municipal bonds and corporate bonds, both of which helped maintain demand,” said Nie Wen, an economist at Huabao Trust in Shanghai. “The rebound will be a short-lived one,” and the manufacturing PMI will likely remain in contraction till the third quarter in an optimistic scenario, he said.

• January economic data may be subject to distortion due to the Spring Festival holiday, which starts on Feb 5 this year, 11 days earlier than last year

• “As domestic policy easing bears more fruit, especially as infrastructure investment picks up in the spring, we expect growth momentum to rebound sequentially in the second quarter,” Wang Tao, head of China Economic Research at UBS AG in Hong Kong, wrote in a recent note

• Chinese and U.S. officials meet in Washington this week for what the White House describes as “very, very important" talks. The current truce ends in early March, and the uncertainty about trade policy after that may also be weighing on export demand

• Smaller manufacturers still continued to struggle, even though the government and central bank have announced a raft of measures to help them get access to capital