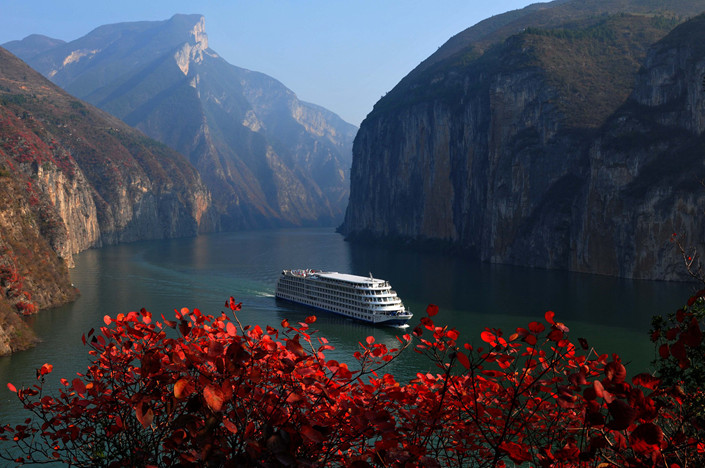 A luxury cruise ship sails in the waters of Qutang Gorge on the Yangtze River, on Dec. 24, 2017. Photo: VCG

On Jan. 3, the U.S. State Department issued a travel advisory cautioning people to be more vigilant when traveling to China. China is now, according to the State Department, as dangerous as the U.K., Germany and France.

But I might issue my own travel warning — if your China itinerary is filled with predictable touristy spots, anyway. China is so vast, varied and personal, that it’s a huge shame that everyone seems visit the same places. So, assuming you are not heeding the U.S.’s travel warning, and are heading to China instead, here’s my warning: Stay away from these places.

I’ve been in this business for 18 years, and it still surprises when I get requests like this: “Husband insists we take a Yangtze River cruise to see the Three Gorges.”

China has changed so much, and there are so many better ways to experience the country. But the Yangtze River Cruise is still the best-known China tour.

The Yangtze River Cruise is a phenomenal marketing success that deserves to be a Harvard Business School case study. When China first opened up to foreign tourists in late 1970s, there were few decent hotels or even flush toilets for foreign guests. The country was vast and the nascent travel industry desperately needed a flagship product. So Chinese travel industry officials did what our manufacturing leaders did years later: They invited foreign experts to tour China and give advice.

Perhaps the American experts grew up reading the popular book by Marjorie Flack from 1933, “The Story About Ping.” It’s the tale of a poor little duck named Ping who gets lost on the Yangtze, and after treacherous adventures, is eventually reunited with his mother, his father, two sisters, three brothers, 11 aunts, seven uncles and 42 cousins.

That’s the China these foreigners wanted to see. And so, the Yangtze River star was born.

The cruise boats on the Yangtze are five-star hotels that float across geographies and history, just like cruises along the Nile River in Egypt. Back then, there was no better way to see China and have creature comforts at the same time, in temperature-controlled rooms with river-view windows, white tablecloths, and potable house wines. Off the boat, quaint villages, temples, and the oft-parroted “5,000 years of history” loomed — without the necessity of venturing into a local toilet.

Since then, though, the boat-clogged river’s water level has risen over 300 feet, so the scenery isn’t as dramatic. Meanwhile, luxury hotels have flooded the big cities of China, and creative designer guesthouses are popping up in the most remote corners of the country.

So, my advice is to get off the boat and go off the beaten path. There’s no need to seal yourself off from the real China now.

Don’t get me wrong: I love pandas. I just don’t love the panda experience.

I have seen pandas all over the world — at the Beijing Zoo, the San Diego Zoo and the Smithsonian National Zoo in Washington, D.C. They are all the same. The only difference is the size of the panda’s home.

I’ve also gone to the other extreme: wild panda tracking in the Qinling Mountains, the northern edge of panda country accessed via Xi’an. The research center offered basic lodging. The rangers were quite knowledgeable and explained to me the musky smell was of the takin, a goat-antelope found in the eastern Himalayas, and showed me the fresh bites left by panda cubs on bamboo.

But the pandas remained elusive. I had secretly wished for something like an African safari, but instead got three days of hiking without the reward of a mountain top sunrise or a sundowner by the watering hole.

I could still see the potential as a great educational experience. But before the rangers, scientists and travel trade had a chance to work together to develop a sustainable approach to experiencing pandas in their natural habitat, the nature reserves slammed their doors shut. In China, it was deemed, the nature reserves are for conservation, not for tourists.

I also visited the touristy options, the Panda Breeding Center in Chengdu and the Panda Research and Rescue Center in Dujiangyan, both in Sichuan province. There are others but they’re all about the same. And honestly, I am not a fan.

Lijiang is a smashing success in lifting hundreds of thousands of people out of poverty.

In fact, it has achieved that goal so perfectly that you probably don’t want to be there.

The old town of Lijiang is one of China’s earliest UNESCO World Heritage Sites. It made the list in 1997 after a massive post-earthquake reconstruction binge. Lijiang was historically an important town in northwest Yunnan province, serving as a meeting place for the ethnic Chinese region to the south and east and the Tibetan areas to the north and west. The major ethnic group here is the Naxi, who have their own written and spoken language and have followed a local shamanistic religion called Dongba.

Lijiang was destined to become a tourism icon, with its unique ethnic cultures and history set against a breathtaking glacier that rises 18,000 feet. Quentin Roosevelt II, the grandson of U.S. President Teddy Roosevelt, first came to Lijiang in 1938 and was immediately smitten. He collected Naxi artifacts and wrote his Harvard thesis on Naxi culture.

Another one of Yunnan’s larger-than-life itinerant foreigners was Joseph Rock, an eccentric Austro-American botanist and adventurer who lived for years in the mountains near Lijiang. In 1949, faced with the prospect of leaving the picturesque village where he had made his home, he wrote: “I want to die among those beautiful mountains rather than in a bleak hospital bed all alone.” Nonetheless, he left.

Back in 1999, when I was a management consultant for McKinsey & Company, we went to Lijiang to assist The Nature Conservancy and the local government to develop a plan for national parks. We saw the potential of Lijiang, and recommended a plan to maintain the character of this cultural and scenic gem by promoting high-end tourism with minimum impact on the environment.

But the need for GDP development trumped everything. I don’t blame them. Who doesn’t want a house with big windows and a flush toilet?

Today, the majority of Naxi people live in modern apartments outside of the old town. The old town is lined with tourist trinket shops, selling T-shirts with Naxi characters, jade bracelets, yak-bone hairpins. And that’s all without mentioning the restaurants and bars with loud, thumping music. In just a few years, Lijiang might become China’s one-night stand capital.

To put things in perspective, the total population of the Naxi is about 300,000, a bit bigger than that of Orlando, Florida. Last year, 20 million visitors filed into Orlando’s Magic Kingdom — and double that flooded into Lijiang’s old town.

China desperately needs innovation in its travel offerings — and I am delighted to say that changes are coming. Waves of Chinese travel enthusiasts are demanding a more sophisticated interpretation of our country, and that gives me hope.

Zhang Mei is the founder of WildChina, an award-winning travel company, and author of “Travels Through Dali with a Leg of Ham,” out via Penguin Books. She is a native of Southwest China’s Yunnan province and holds an MBA from Harvard Business School. Follow Mei’s travels on Instagram at @wildchinamei