Is Winter Finally Over for China’s Indie Game Creators? 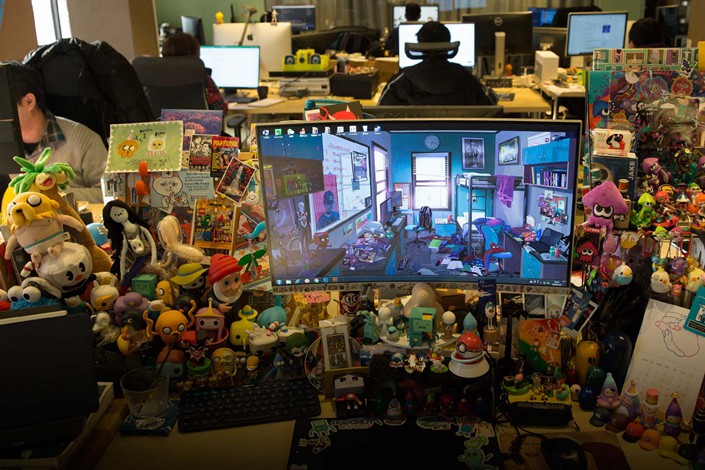 (Sixth Tone) — One Friday in December, 37-year-old Bao Weiwei got ready for work like he did every day. He put on a plaid shirt — the iconic uniform for Chinese computer programmers — ordered a cab, and went to his office in downtown Shanghai.

For nine months, Bao and his fellow independent game developers had been faced with uncertainty. Though they went to work each day, they had no idea when or if they’d ever be able to release another hit. But that morning, something extraordinary happened: The government announced that the nine-month freeze on game licensing was finally over.

“Everyone in the company was happy,” says Bao, who’s best known in the industry as Wesley. “At least the process has restarted.”

China is the world’s largest gaming market, boasting nearly 620 million players and $38 billion in total revenue. But from March to December last year, a massive government restructuring led to authorities halting the licensing process which all games — domestic or international — must go through to enter the market, leaving over 5,000 titles waiting to be approved. An industry report found that revenue in China’s gaming industry grew just 5.2% in the first two quarters of last year, lower than the 26.7% over the same period the year before.

“Big factories” — a term for big gaming companies like Tencent and NetEase — saw their stocks bounce on the day of the recent announcement, and already 447 new games have been approved. But the nine-month freeze created more of a mixed picture for Chinese indie developers, which Bao estimates number around 2,000. Over the freeze, some ran out of money and folded. A growing number of indie game developers turned to overseas platforms such as PC gaming platform Steam, one of the world’s largest PC game publishing platforms. There, they’ve been able to avoid Chinese government oversight of content and competition from Chinese gaming giants, which are mostly focused on mobile games. While the end of the freeze and the announcement that a Steam China is in the works are signs of stability, developers worry that the challenges aren’t over.

Analysts couldn’t give estimates for how many indie game developers might have disappeared, but for some, like game designer Yang Geyilang, the nine-month freeze was a sweet time. Luckily, his Beijing-based studio Moyuwan’s game “Chinese Parents” had already gained the necessary approvals before March, meaning the PC version could be released in China last year. The simulation game, which allowed players to raise a virtual baby, was also released on Steam, where developers take 70% of the profit. In October 2018, the Chinese language-only game made it onto the platform’s best-selling chart.

Like most indie studios, Moyuwan only has the resources to produce one game at a time, essentially putting all their eggs in one basket. If the game they’re working on succeeds, they might have money to produce another game — but if it fails, they’ll be broke and out of business. Moyuwan only has three staff members, all living and working in an apartment outside Beijing’s Fifth Ring Road: game graphic artist Yang, a programmer, and a game designer. While developing, they barely leave the apartment and only go into Beijing’s downtown area once a month. “We used to work for the big factories where people only cared about statistics,” Yang tells Sixth Tone over the phone. “They produce products, not games.” But now, Yang can focus on the games themselves: “I don’t care too much about business.” Despite the instability of his work, Yang jokes that his parents still prefer this to if he’d wanted to become a rapper.

While Moyuwan was lucky during the freeze, Yang worries that things may get harder for the studio going forward. For nine months, Moyuwan didn’t have to worry about competition from the “big factories.” Now, Tencent and NetEase will be back to churning out well-financed hits, meaning Moyuwan will face far more competition than it does on Steam, where there are relatively few Chinese-language games. “Steam is a treasure box where I can learn from great examples,” Yang says. “The competition [on Steam] is much smaller.”

Worse still, Steam’s time as China’s gaming sanctuary may be coming to an end. Aside from its Reddit-like community page, Steam is currently not blocked in China. There’s also limited oversight for the games released on the platform, meaning its 30 million Chinese users can access games that aren’t approved for the domestic market. But some worry that Chinese authorities may use the release of Steam China to block access entirely to the international Steam, preventing gamers from accessing unapproved games. Yang sees positives and negatives in this. “With Steam China’s release, we hope the [Steam] connection will be improved, since we currently often come across situations where some webpages of Steam can’t be opened,” he says, adding: “Our worry with Steam China is that the access to the original Steam might be restricted.”

Like “Chinese Parents,” indie hit “The Scroll of Taiwu” was also a breakout success during the freeze. The combat game, developed by Chinese indie studio ConchShip Games, was based on Chinese mythology and outperformed big-name games like “PlayerUnknown’s Battlegrounds” on Steam.

ConchShip game designer Zheng Jie, who’s known by his nickname “eggplant,” used to live a double life: an architect by day and a self-trained game designer and coder by night. He’s spent the past three years honing his magnum opus and finds that Steam provides good opportunities for people like him who’ve started from scratch. ConchShip took its name from a mythological boat that travels underwater and brings extraterrestrial beings to enlighten Emperor Qin Shi Huang; similarly, Zheng hopes his games can keep showcasing more interesting gaming worlds to players.

But like Yang, Zheng worries that once licensing resumes, there will be more competition for indie companies. (Zheng spoke over QQ message — he’s currently so occupied with debugging and updating his game, he wasn’t sure he could get through a whole phone call without interruption.) “Most indie developers don’t have many means to compete with the big companies,” he writes. “This is the best and the worst era.”

Part of the problem is that China’s indie gaming industry has only existed for half the time of its foreign counterparts, says Liu Chao, a senior analyst at Chinese gaming data firm Gamma Data. “The domestic indie gaming industry is still in the process of exploration,” Liu tells Sixth Tone.

But they’ve also been hindered by the slow creep of bureaucracy. Before 2016, games didn't even need to get a license for publishing. Last year’s freeze was a result of a government department reshuffle that didn’t go very smoothly. Now, gaming companies need two credentials: an online culture operating permit, and internet content provider credentials. For each game, the companies need to register with the Ministry of Culture, get copyright recognition from the Copyright Protection Center of China, and obtain a license of publication from the media regulator.

Longtime developer Bao agrees that China’s indie developers are still far behind their overseas counterparts. Like Zheng, Bao is fond of nautical references: His business card is printed with a cartoon version of himself wearing a captain’s uniform. He deploys a sailing metaphor to describe how China’s indie game developers compare. “Developing indie games is like drifting in the vast sea: Before setting sail, we should bring as many survival tools as possible,” says Bao. “Developers in the West are already fully packed, but we have only just started learning to make seafaring tools.”

During his 10 years in the industry, Bao has witnessed huge changes for indie game developers. In 2009, Bao quit his well-paid but restrictive job at the Shanghai branch of Japanese gaming conglomerate Konami and founded Coconut Island Games Studio as a solo passion project in his study at home. He remembers how only around 20 people showed up to his first game jam event in 2011, an event where developers teamed up to create game prototypes under tight time restrictions. “At the very beginning, no one paid attention to us,” Bao says, adding that there was no concept of ‘indie games.’ “I wasn’t thinking that I was developing indie games,” he says, sitting in a meeting room with a whiteboard covered in drawings and scribbles. “I was just doing something I wanted to do.”

Since 2016, he seen a growing demand for indie developers and an increase in people attracted to the idea of creating their own games. Nowadays, huge numbers turn up to China’s biggest gaming community IndieACE, which he helps organize, and big corporations sometimes pick up indie brainchilds as commercial titles. After initially shunning funding to avoid outside influences, his own Coconut Island secured investments and expanded to 30 people. He’s had a series of hits, including “iDragPaper,” an almost comically simple mobile game in which players test how fast they can pull toilet paper from a roll; “Haywire Hospital,” an animated simulation in which players run a hospital; and “Naughty Kitties,” a game where feline characters must defend their planet inhabited only by cats. Shortly after its release, “iDragPaper” had over 10 million downloads, allowing the company to operate off the revenues alone for four years.

During the nine-month freeze, four games Bao’s company wanted to publish were stuck waiting for licenses. Bao doesn’t complain too much. “The official approval process has been tougher since 2016 when they started to require the licenses,” Bao says calmly.

But even with the changes Bao’s seen, one thing has remained constant: It’s tough to be an indie game developer. “The success rate is lower than 5%, and more than 95% have no way to grow,” Bao says. He’s observed many developers coming into the industry with the illusion that the investment return rate is sky-high for a successful indie title. But many end up forced out of the industry once they realize that indie games aren’t a great way to make money. “I told many indie developers that they shouldn’t go into the kitchen if they’re afraid of heat,” said Bao. “In other words, don’t make indie games if you want to earn money.”

This story was originally published by Sixth Tone. Read the original version here.