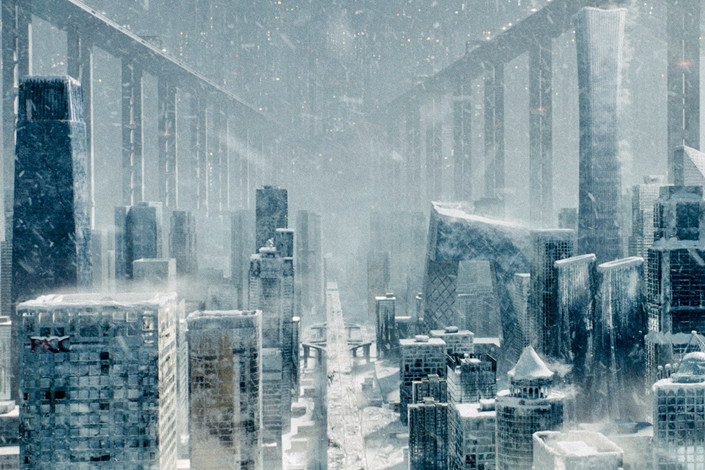 A still from "The Wandering Earth." Photo: IC

The Lunar New Year box office hit “The Wandering Earth” has ignited the Chinese people’s passion for domestic science fiction movies. As the sun faces helium flashes, humankind must work together to equip Earth with tens of thousands of nuclear fusion engines to begin Earth’s “wandering” journey. When it is affected by the slingshot effect of Jupiter’s gravity, Earth is at risk of colliding with Jupiter. After a thrilling fight, the characters in the movie successfully detonate Jupiter, push Earth away with the blast wave, and save human civilization. Such a magnificent fantasy is no less than any Hollywood science fiction film, and the delicate visual effects have pushed the Chinese film industry’s technology to a first-class level. “The Wandering Earth” is a milestone in Chinese science fiction cinema.

Unlike Hollywood science fiction movies in which humans leave the Earth to build their homes in space, the story of “The Wandering Earth” is that humans transform the Earth into an interstellar spacecraft to escape disaster. This act of taking the earth to wander is more in line with the Chinese people’s attachment to their hometown and homeland. The grand project of building numerous underground cities and engines and the feat of detonating Jupiter also reflect Chinese mythology. Liu Peiqiang, the protagonist of the film, drives the space station to hit Jupiter, embodying the spirit of sacrificing life and taking justice in Chinese classical culture.

However, we don’t think it was necessary for a lottery system to be used to abandon half of the world’s population. The film does not reveal how many people were refused asylum in the bunkers, but it is estimated that by the year 2075 the global population would reach 9 billion. Assuming climate change-related disasters claimed the lives of about 2 billion people, and we know that 3.5 billion people in the film live in the underground shelters around the world. Thus, the remaining half would have been abandoned. Such sacrifices are unnecessary, assuming that people would choose to save a family member rather than have slightly more space.

Additionally, the limited benefits of such sacrifices are insufficient to compensate for their ethical costs. If those seeking shelter in the underground cities are not merely refugees but are active creators and builders who could use their talents to improve underground life, it is even more unreasonable to give up half of the population. Who knows how many scientific geniuses, outstanding engineers or hard-working laborers were abandoned in the lottery?

While halving the population could make life, and the clamor for resources, more relaxed, in reality this thinking is counterproductive. This point is confirmed by reflecting on China’s family planning policy and its impact. Though the original intent of the policy was to promote economic and social development, it now seems to exacerbate China’s low fertility crisis and puts strain on the future of China’s development. The smart, industrious, and large population is one of China’s core advantages — but in the past few decades it has been seen as a disadvantage.

However, returning to the movie “The Wandering Earth,” we believe that respect for life is the basic value of the film. For example, instead of fleeing the planet, the characters choose to preserve human life to the greatest extent possible. Abandoning half of the world’s population in the movie may only be to show the cruelty of catastrophe. As Liu once said, we have no ideological preparation for the moral and value systems under the threat of extinction. Nevertheless, it is easy for viewers to associate this scenario with stringent birth restrictions and household registration controls.

If we change the plot to try to save every life, we can not only avoid this embarrassing association, but can also advocate for healthier and better values. Imagine that the bunkers were initially designed to accommodate 7 billion people, but only half of the project was completed due to some external factors. Faced with this dilemma, the coalition government could encourage people to tolerate each other and ultimately pull all living people into the bunkers for refuge.

It seems that the idea of emotions trumping rationality is precisely the plot that some classic movies have repeatedly used. For example, in the Hollywood science fiction film “The Martian” a group of astronauts on an expedition to Mars flees the planet after a major storm. Later, the crew discovers that one of the astronauts, who they had presumed died, is actually alive, and they launch a rescue mission. This kind of plot embodies the perseverance and optimism of never giving up, as well as the respect for each individual life, which is the intrinsic motivating force for the continuation and prosperity of human civilization.

We hope that Chinese science fiction movies will advocate values that are more appealing and inspiring so that the humanistic core of China can come to underpin human civilization. There is no doubt that “The Wandering Earth” has taken a solid step in this direction. We emphasize that the values reflecting humanistic emotional tendencies determine the end-result of civilization, and the choices we make determine what kind of civilization we can achieve. In our view, the best way to reflect humanistic values and optimism would be to do everything possible not to give up a single life.

The authors of this op-ed are Huang Wenzheng, an invited senior fellow at the Center for China and Globalization (CCG) and He Yafu, a demographer and co-founder of the website Population and the Future.

Note: This op-ed has been edited for brevity and clarity.