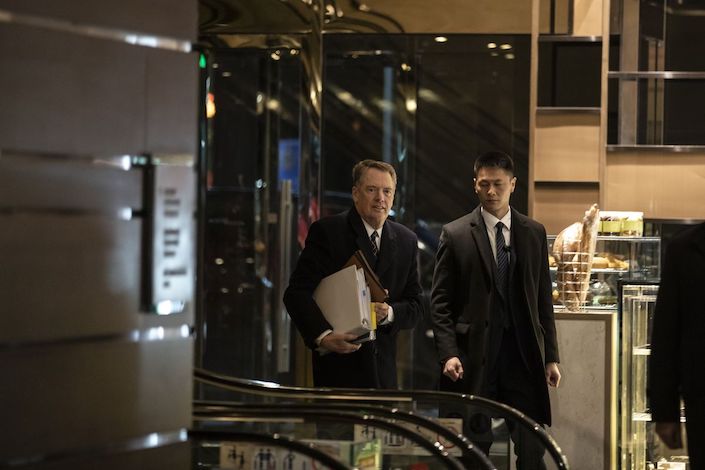 Top level officials including U.S. Treasury Secretary Steven Mnuchin and top trade negotiator Robert Lighthizer are scheduled to meet with their counterparts in the Chinese capital, as the clock ticks down to an original deadline of March 1 set by the U.S. to reach a breakthrough or face higher tariffs. Trump has signaled that date may shift if the two sides are close to a deal, though there’s little signal yet that an accord is near.

If agreement does materialize, it could pave the way for a meeting between Trump and Chinese President Xi Jinping to seal it. They’re the “only two” that can nail down a comprehensive trade deal between the two nations, White House Press Secretary Sarah Sanders said on Fox News.

Asked whether the Trump-Xi meeting will take place at Mar-a-Lago, Sanders says "it certainly could be, it would be a great venue."

Xi is scheduled to meet key members of the U.S. delegation, including Lighthizer and Mnuchin in Beijing on Friday, the South China Morning Post reported, citing unidentified people. Trump met the Chinese delegation in the last round of talks in Washington.

In the talks, the U.S. is pushing for wide-ranging changes in the way China manages foreign trade and its own economy. Specifically, Lighthizer has zeroed in on China’s alleged abuses of intellectual property and state sponsorship of companies.

Trump has also railed against the size of the U.S. trade deficit with China, and negotiators have made varying demands about how Beijing addresses this. The goal of “reciprocal trade” has been a clear priority of Trump’s policies.

China wants to have the tariffs that have been imposed so far removed. To get the U.S. to do that, negotiators are trying to focus attention on China’s more than $300 billion goods trade surplus. Beijing has offered to ramp up its purchases from the U.S. massively over the next six years in order to even the scales.

The two teams are negotiating against the backdrop of a weakening global economy, with the Chinese side facing particular worries at home. China’s trade data for January is due for release Thursday, with economists forecasting a further weakening of exports.