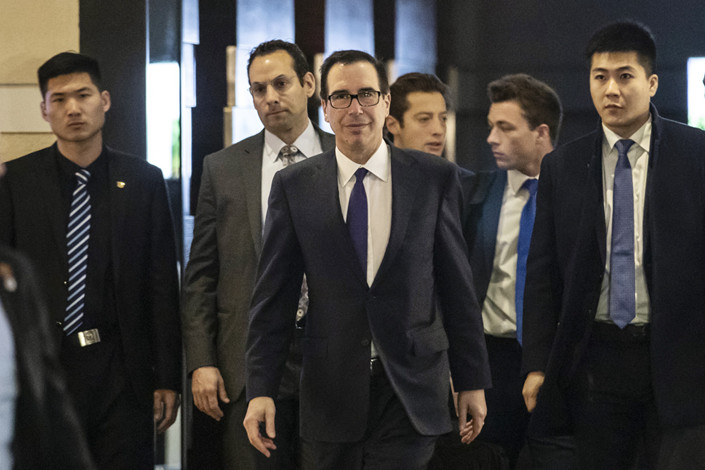 (Bloomberg) — U.S. President Donald Trump is considering pushing back the deadline to impose higher tariffs on Chinese imports by 60 days, as the world’s two biggest economies try to negotiate a solution to their trade dispute, according to people familiar with the matter.

The president said Tuesday that he was open to letting the March 1 deadline for more than doubling tariffs on $200 billion of Chinese goods slide, if the two countries are close to a deal that addresses deep structural changes to China’s economic policies — though he added he was not “inclined” to do so. The people said that Trump is weighing whether to add 60 days to the current deadline to give negotiations more time to continue.

Chinese officials had initially proposed an extension of 90 days, but that was knocked back by the U.S. side, people familiar with that request said.

Lighthizer and Treasury Secretary Steven Mnuchin are in Beijing for the latest round of high-level talks with Chinese Vice Premier Liu He on Thursday and Friday. A meeting between Lighthizer and Chinese President Xi Jinping is being tentatively scheduled for this week. Trump’s willingness to extend the deadline may depend on the outcome of that meeting, one of the people said.

Trump has indicated he will need to meet Xi to agree on a final deal. While no date has been set, a White House aide this week said the U.S. president still wants to meet his Chinese counterpart soon in a bid to end the trade war.

Negotiations this week are focused on how to enforce the trade deal and putting on paper a framework agreement to present to the two presidents.

In the talks, the U.S. is pushing for wide-ranging changes in the way China manages foreign trade and its own economy. Specifically, Lighthizer has zeroed in on China’s alleged abuses of intellectual property and state sponsorship of companies.

Trump has also railed against the size of the U.S. trade deficit with China, and negotiators have made varying demands about how Beijing addresses this. The goal of “reciprocal trade” has been a clear priority of Trump’s policies.

China wants to have the tariffs that have been imposed so far removed. To get the U.S. to do that, negotiators are trying to focus attention on their efforts to reduce China’s more than $300 billion goods trade surplus. Beijing has offered to ramp up its purchases from the U.S. massively over the next six years in order to even the scales.

It is going to take a lot of work to shrink that. While down from the record peak late last year, China still had a $27.3 billion trade surplus in goods with the U.S. in January, according to data released on Thursday in Beijing.