By Michael Smith and Su-Lin Tan 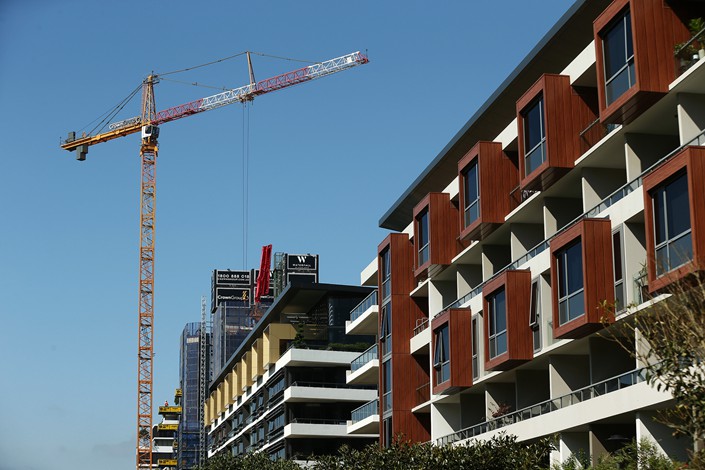 A crane stands next to residential buildings in the Green Square area of Sydney, Australia, on Jan. 12. Photo: VCG

(AFR) — China has introduced jail terms for operators of “underground banks” illegally helping tens of thousands of its citizens transfer money out of the country to buy property overseas, in a move developers warn is a big blow to Australia's real estate market.

The Supreme People’s Court quietly introduced stiff penalties for illegal currency exchanges at the start of the month, in a further effort to stop capital from leaving the country. China's leaders want to prop up the slowing economy, stimulate the local property market and prevent a further sell-off in the domestic stock market.

The move, which imposes jail terms of five years or more for offenders, would target the operators of so-called “underground banks” which facilitate illegal foreign exchange and cross-border trading. Tens of thousands of middle class Chinese use the services to funnel billions of dollars out of the country to buy property in Australia, New Zealand, Canada, the U.K. and other countries.

Property developers, agents and accountants warned the latest changes to foreign exchange and capital transfer laws in China represented a further blow to foreign buyer interest in Australia’s flagging property market, and could scare off Chinese buyers from even legitimate transactions.

Under the new rules, illegal foreign currency transactions of more than 5 million yuan ($739,000) or those which generated illegal profits of more than 100,000 yuan, would be treated as a serious violation. The punishment would be five years in prison and fines of up to five times the profit made on the transaction.

Jail terms of more than five years would be imposed for cases involving more than 25 million yuan or transactions generating more than 500,000 yuan.

The new rules were published by the Supreme People’s Procuratorate late on Jan. 31 and implemented on Feb. 1, just ahead of the week-long Chinese New Year holiday. However, it only caught the attention of property developers this week.

While Beijing has been cracking down on underground banks for several years, the introduction of jail terms is a big step up in Beijing's efforts to keep capital in the country.

Chinese citizens have continued to skirt opaque government restrictions on the amount of money they are allowed to get out of the country, helping to fuel the Australian property boom. This is despite a $50,000 limit on the amount an individual can send offshore each year. Underground banks, while technically illegal, previously operated within a grey area in Chinese law, without specific punishments of violations.

Analysts said the new rules targeted the operators of underground banks, rather than individual citizens seeking to buy an apartment or a house in Australia. But they would still hurt deals involving legitimate transactions as buyers would be too scared to send their money to agents which have traditionally facilitated such deals.

“Most people will be too afraid to transfer money across, even the legitimate amounts, for fear the money would disappear or fail to follow through,” Sydney-based accountant Jack Zhang, who has many Chinese clients, said.

Developers warned this would this would slow apartment transactions where payments were made in yuan for homes purchased in Australia.

Local agent Home789's Walton Chu said this would temper foreign buyer interest, which had already been hit by a slew of surcharges. Transfers to Western Union outlets could also be deemed illegal under the new laws, the local Chinese business community said.

Others, however, said such "underground" transactions had long been prohibited in China, so the impact on capital transfer would be minimal. In 2018, China's foreign currency regulator helped security officials target 70 underground banks involved in more than 100 billion yuan in transactions, according to the Shanghai Securities Journal.

Liu Yuan, research director at Centaline China Property Research Centre, said the new rules would mainly affect transactions of between 1 million yuan and 10 million yuan as wealthier individuals looking to do bigger deals had other ways to get money out of the country. He said underground banks could still find ways to skirt the new laws. "The Australian property sector will be impacted from these regulations but it won't kill it off," he said.

Liu Xuezhi, an economist at China's Bank of Communications, said the new rules were the latest evidence that Beijing was using a crackdown on illegal capital outflows to stabilise the currency and the domestic.

Court documents said the new rules were designed to "maintain financial market order". Punishments would also apply to online payments being made through Chinese applications such as AliPay and WeChat. China's foreign exchange regulator reported an increase in the number of violations last year.

Chinese investors face growing hurdles getting money offshore to buy property at the same time as Australian banks are restricting loans to foreign buyers. This was highlighted by the collapse of property sales agency Ausin last year, which resulted in 130 failed residential property settlements in Australia.

More than 100 Chinese property investors said they lost millions of dollars in deposits and payments for off-the-plan houses and apartments in Sydney, Melbourne and Brisbane following the Ausin collapse. Some told The Australian Financial Review last year they paid the full amount for the properties directly to Ausin because they did not know another way of getting their money out of China. Nor could they secure mortgages with Australian banks.