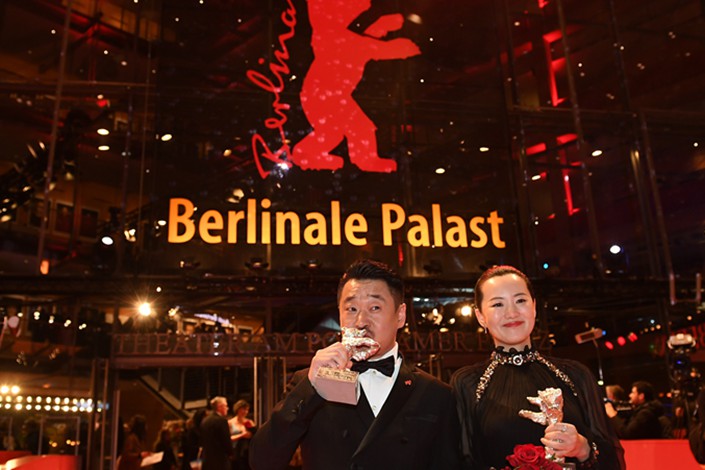 Wang Jingchun（left） and Yong Mei pose with their Silver Bear trophies for Best Actor and Best Actress for "So Long, My Son" in Berlin, Germany. Photo: VCG

China has swept the best actress and actor awards at the Berlin International Film Festival in its first award-winning showing in three years.

Stars of the family epic “So Long, My Son” — Wang Jingchun and Yong Mei — won the Silver Bears for best actor and actress for their roles as a husband and wife dealing with the fallout from China’s one-child rule.

The accolades were handed out Saturday at the 69th Berlin Film Festival.

The last Chinese film to win a Silver Bear was “Crosscurrent” in 2016, directed by Yang Chao. It won Outstanding Artistic Contribution for Cinematography for the work of Taiwan cinematographer Mark Lee Ping-bing.

About 10 films from Chinese directors were scheduled to show or compete this year at the festival, which is also known as the Berlinale.

However, after celebrated director Zhang Yimou's “One Second” was pulled from the competition at the eleventh hour, Wang Xiaoshuai’s “So Long, My Son” emerged as a strong contender against Wang Quan’an’s “Ondog” for the Golden Bear award, the festival’s top prize.

But it was beaten by Nadav Lapid’s “Synonyms,” about a young Israeli man in Paris who has turned his back on his native country.

In 1988, Zhang became the first Chinese director to win the Golden Bear award, for the film “Red Sorghum.” His other internationally acclaimed works include art house classic “Raise the Red Lantern.”

Set amid the Cultural Revolution in the 70s, the decades-spanning “So Long, My Son” tells the story of a family dealing with China's decades-long one-child rule, which was introduced in 1979. After the protagonists’ teenage son drowns, a brutal family-planning official forces Yong Mei’s character to endure an abortion when she falls pregnant with a second child.

Director Wang is a filmmaker well-known to the Berlin competition, where his “Beijing Bicycle” took the jury grand prize in 2001, and 2008’s “In Love We Trust” won best screenplay.

“But ‘So Long, My Son’ is, thematically if not formally, his most ambitious project to date, and not just because it is his longest. At three-hours-plus, it may seem like an ungainly vessel, but it needs the heft to remain seaworthy across the swells and ebbs of more than three decades of Chinese history,” wrote film reviewer Jessica Kiang for Variety.

Wang wrote on his Weibo on Sunday that he was grateful to be part of the crew as “it’s unusual that under very difficult circumstances that we could produce such a great epic to depict a challenging time."

No Chinese release date for “So Long, My Son” has been announced.