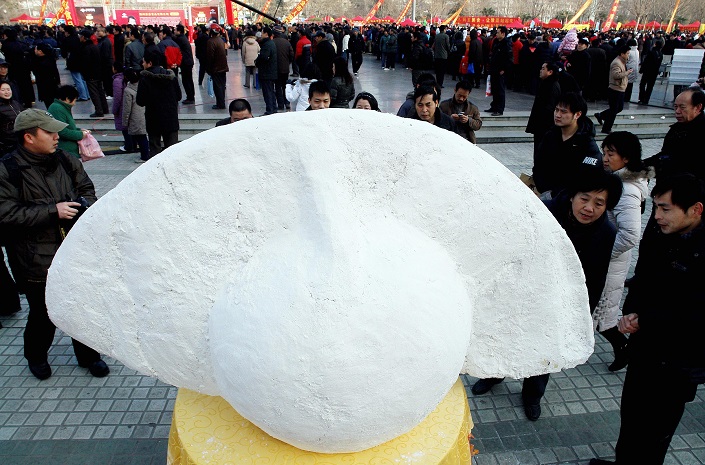 People admire a giant dumpling made by Sanquan Foods in Zhengzhou, Henan Province, in 2009. Photo: VCG

Major supermarkets in Beijing have taken dumplings made by one of China’s biggest frozen food companies off shelves, fearing they may be contaminated with African swine fever.

One spokesperson from Wu Mart, a leading local supermarket chain backed by Tencent, told Caixin the company was recently asked by authorities in Beijing to suspend sales of some Sanquan Food dumplings.

After multiple Chinese outlets published reports that Sanquan’s products had been contaminated, the company released a statement Monday acknowledging that several batches of pork dumplings were suspected of containing traces of the virus.

African swine fever is not known to affect humans, but is deadly for pigs. Sanquan said the products had been isolated and that it would collaborate with government investigators looking into the case.

Sanquan dumplings can no longer be found on major e-commerce platforms including Suning, JD.com, and Tmall, but some offline stores are still selling other frozen products from Sanquan, including dumpling lines not affected by the ongoing investigation, Caixin found.

The Small and Medium Enterprises Board of the Shenzhen Stock Exchange has demanded that Sanquan release a detailed report on the situation by Feb. 20.

Sanquan has yet to submit a formal response to the stock exchange.