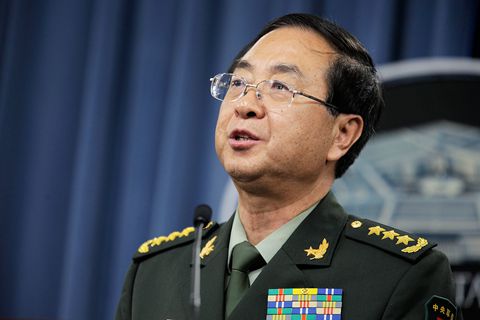 A former top general of the People’s Liberation Army was sentenced to life in prison for corruption, the official Xinhua News Agency reported Wednesday.

Fang Fenghui, former chief of staff of the PLA, was convicted by a military court of accepting and paying bribes and holding a huge amount of assets of unknown origin, Xinhua reported.

The court ruled that all of Fang’s assets would be confiscated, the news agency reported, without disclosing the amount of money involved in Fang’s case.

Fang, 67, joined the PLA in 1968 and was promoted to top general in July 2010. Two years later, he was appointed chief of the general staff and became a member of the powerful Central Military Commission.

He was once a rising star and the youngest PLA commander of a military region when he was appointed to command the Beijing Military Region in 2007 at age 56.

Fang is one of seven top PLA generals who have fallen under graft investigation since 2012 amid the country’s sweeping anti-corruption campaign. Fang was placed under corruption investigation in January 2018 and expelled from the Communist Party in October that year.