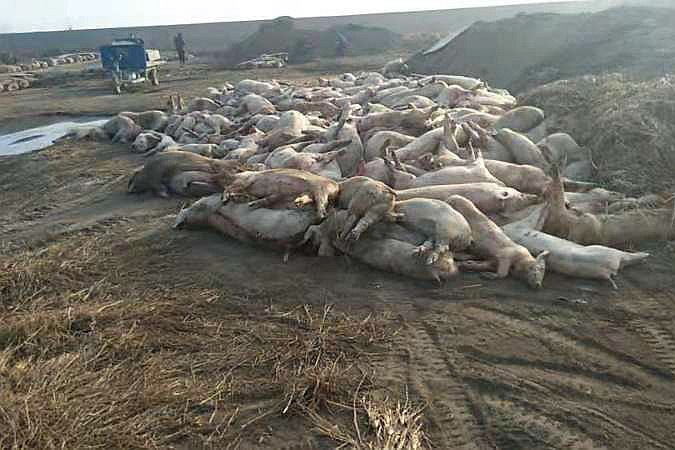 North China’s Hebei province has just confirmed its first outbreak of African swine fever — but one local farmer says official inaction has allowed the virus to spread within the province for weeks.

Hebei’s first swine fever infections happened on a farm in Xushui county, part of the city of Baoding, the Chinese Ministry of Agriculture said in a statement Sunday.

“The farm currently has 5,600 live pigs, and there have already been fatal disease cases,” the ministry said, without specifying how many pigs had already died of the virus, which has swept the country in recent months. The virus is deadly to pigs, but is not known to affect humans.

The announcement comes after Hebei Dawu Agriculture and Livestock Group founder Sun Dawu took to Weibo Friday to accuse the government of staying silent on the recent deaths of 15,000 pigs on his Hebei farm, despite quickly making plans to cull his remaining pigs, which numbered nearly 6,000.

Sun’s post has been shared over 20,000 times on the Chinese social media platform. Sun, who has previously been outspoken on rural issues, gained prominence after his 2003 arrest for allegedly running an illegal credit cooperative sparked debate over financing for smaller businesses.

The outbreak confirmed by the Ministry of Agriculture — which didn’t say if the farm in question was Sun’s — is the first reported in Hebei province, which had officially been swine fever-free until Sunday.

But, according to Sun, who spoke with Caixin reporters at his farm Friday, the virus may already have spread to other farms in the province.

“Practically all the pigs at many nearby farms have died,” Sun said. “We may be the last farm (to experience an outbreak).”

According to a Dawu Group representative, the Xushui farm — run by a joint venture between Dawu and New Hope Liuhe Co. Ltd. — had been running smoothly for nearly a decade, when “some of the sows began to stop eating, had miscarriages, and died one by one.”

Nevertheless, the company decided to purchase its own instruments to test its animals. The new tests showed that all of the pigs that had died had been infected with African swine fever and that some living pigs tested positive for the disease.

Tang Jiyong, director of Xushui county’s Agriculture Bureau, told Caixin that the government’s test results had been determined by experts at a city-center lab in Baoding, and that the company’s testing equipment may have been inferior. In his view, the company’s own test results were “not very accurate,” Tang said.

Either way, pigs continued dying en masse at the farm, so the company continued to communicate with district officials, complaining about financial losses and abnormal animal deaths at neighboring farms. One letter sent by the company said district officials had not taken any measures to control a possible epidemic and continued to allow infected animals to move around the area, increasing the spread of disease. But none of the complaints received a response from the relevant departments, the Dawu representative said.

The representative said the local government had offered Dawu Group compensation of as much as 10 million yuan ($1.48 million). However, the company feels it should not accept “confusion money,” and that the government should “get to the bottom of the epidemic situation, and be responsible to society and the industry,” the representative said.

China’s first case of African swine fever was reported in Northeast China’s Liaoning province last August, and has since spread to at least 28 provinces including Hebei, devastating farms and affecting pork sales.