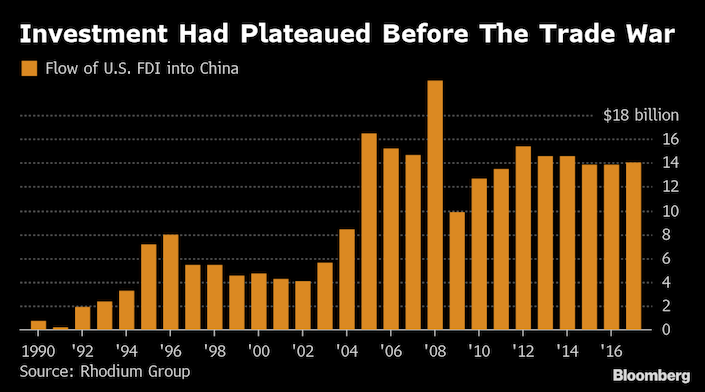 Many American companies are tempering their investment plan in China due to concerns about slower economic growth and the trade war, with their outlook shifting to "cautious pessimism" from "cautious optimism," according to the latest survey conducted by the American Chamber of Commerce.

Firms still see the Chinese market as a high priority, but nearly three-quarters expect China-U.S. relations to deteriorate or stay the same, at best, in 2019. However, companies in all sectors still see China as a top priority in their near-term global investment plans because of moderate growth and the "rise of an increasingly sizeable and affluent middle class."

U.S. companies rank "bilateral tensions" as a top challenge for business in China, just behind long-standing issues such as rising labor costs and inconsistent policy interpretation and uneven enforcement. As many as 65 percent of the respondents said trade tensions are influencing their longer-term strategies, and about 25 percent are delaying extra investments in China. Some companies have a "wait and see" attitude, while a growing number of firms are mitigating risks through making contingency plans, diversifying supply chain and delaying investment. U.S. companies continue to highlight concerns over market access restrictions and opaque regulation, especially in technology and other research-intensive industries. One third of respondents limit investment in China because of intellectual property protection concerns, though the majority acknowledge China’s efforts to improve the IPR laws and enforcement, especially regarding trademark and brand protection. About 50 percent of respondents are optimistic that China will open markets further for foreign businesses.

If the U.S. can force China to further open its markets to foreign products and investors in the ongoing talks, U.S. companies invested in the country stand to benefit. However, the trade war has already damaged them, as it has damaged companies and farmers at home that do business with China. According to the report, U.S. firms said tariffs generated higher manufacturing costs, lowered customer demand and put pressure on profitability.