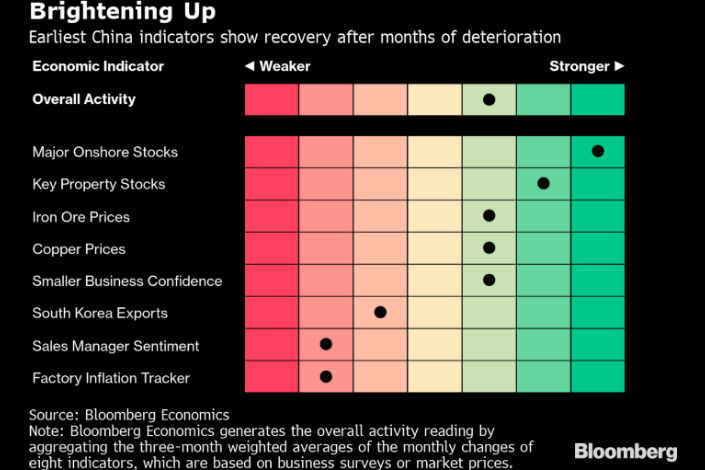 (Bloomberg) — China’s economy is showing the first signs of recovery after months of slowdown, as stock and commodity rallies lift confidence.

That’s the message from a Bloomberg Economics gauge aggregating the earliest available indicators on market sentiment and business conditions. Key stocks and commodities led gains, and smaller firms became more confident. At the same time, gauges of inflation, trade and sales-manager sentiment signal that it may still be too early to say China has bottomed out.

Markets were boosted by the People’s Bank of China’s monetary easing and the breathing room offered by the now-extended trade truce with the U.S., according to David Qu, an economist at Bloomberg Economics in Hong Kong. This week, Chinese shares surged and the offshore yuan strengthened after President Trump announced he was pushing back a deadline on additional tariffs on Chinese goods.

Those developments help dispel some of the gloom that’s been cast over the global economy in recent months. World output may already have bottomed out, according to Goldman Sachs Group Inc. Chief Economist Jan Hatzius. In turn, that could strengthen the China outlook.

The China stock rally “may strengthen consumer confidence, but it is still too early to say it would benefit economic activity significantly,” Qu said.

Stimulus measures including channeling credit to private firms and boosting infrastructure construction have started to work, with new loans hitting a record and exports perking up in January. Monetary policy will remain supportive and fiscal measures — such as tax cuts, spending increases and special bond sales — will even strengthen this year, Qu said.

Targeted policy support by the authorities to better meet financing needs of small and medium-sized companies is taking effect, according to Shen Lan, the Beijing-based economist in charge of the survey of smaller firms at Standard Chartered PLC. The bank’s gauge edged up to 55.1 this month from 54.9 in January.

"We expect continued policy measures to improve monetary policy transmission and lower funding costs for China’s real economy," she wrote in a note released with the data.

Increasing optimism aside, the clouds haven’t cleared for China’s economy. An index based on a survey of sales managers remained at the lowest level on record, suggesting "the rate of economic growth continues to fall," the London-based World Economics Ltd. wrote in a note.

A factory inflation tracker remained lackluster, and global demand is still a drag on the world’s biggest exporting nation. Outbound shipments from South Korea — a major supplier of components to Chinese assemblers of electronics such as iPhones — fell 11.7% from a year earlier in the first 20 days of the month. The gauge, which is usually volatile, has shown a downshift in the world electronics trade in recent months.

The first official economic data for February, the purchasing managers indexes for the manufacturing and non-manufacturing sectors, will be released Thursday morning in Beijing. The manufacturing indicator will probably have edged down further, and the gauge of services and construction will also fall, according to economists polled as of Tuesday.