Will Kim’s Trip to Vietnam Nudge North Korea Toward Reform? 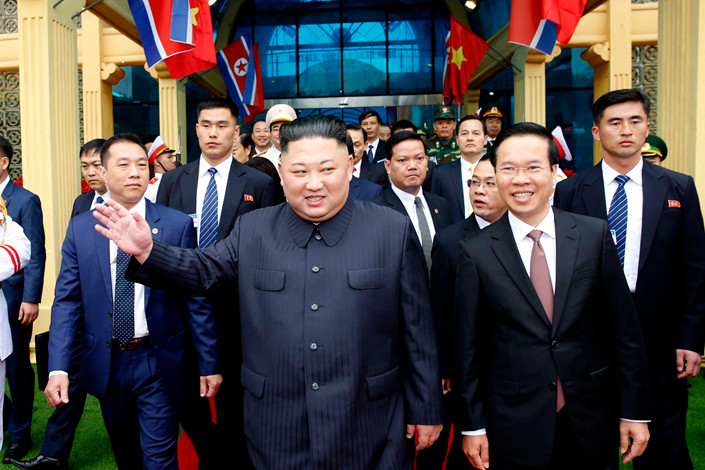 Journalists and officials from all over the world have descended on Hanoi, Vietnam as North Korean leader Kim Jong Un and U.S. President Donald Trump prepare to meet for a second summit on Wednesday evening.

While there were a number of factors behind the choice of Vietnam as the venue for the second historic meeting, many observers believe that the choice has great symbolic significance.

Though North Korea and Vietnam are both socialist countries that fought the United States during the Cold War era, the two countries took very different routes to development. North Korea’s relationship with the U.S. is fraught, with missile tests and rhetoric escalating tensions in recent years to near-disastrous levels. After the end of the Cold War, Vietnam and the U.S. normalized relations, and in the 1990s Vietnam opened its private sector to the rest of the world, inviting investment and speedy growth.

Many analysts said that beyond the summit with U.S. President Donald Trump, Kim’s visit to Vietnam could also involve visits to manufacturing centers in the north of the country, to industrial port cities, to tourist destinations and more to see Vietnam’s model of economic transformation and quick development.

“The topic of North Korea drawing lessons from Vietnam’s development has actually been talked about for a while,” said Nguyen Mai, president of the Vietnam Association of Foreign Invested Enterprises.

Nguyen said that in the two weeks leading up to the summit, the South Korean ambassador held a meeting in which he suggested establishing a trilateral cooperation agreement between South Korea, North Korea and Vietnam. However, Nguyen added, “As for what North Korea will learn from Vietnam? The North Korean side must decide for themselves once they have learned about Vietnam.”

Andray Abrahamian, a fellow at Stanford University who has been to North Korea more than 30 times, said that despite Vietnam and North Korea’s similarities in geopolitical situations and national and social systems, their “strategic contexts” are quite different. However, Vietnam’s development shows that “an American enemy can become a partner and that a single-party state can run an open and successful economy,” Abrahamian told Caixin.

Abrahamian, in his previous role as executive director of the Choson Exchange nonprofit that trains North Koreans in economic policy and entrepreneurship, took some of the trainees to visit Vietnam. The trainees were interested in “land development, the tourism sector, and public-private partnerships,” Abrahamian told Caixin. “Overall, I think Vietnam’s development was impressive to the North Koreans.”

Troy Stangarone, the senior director of congressional affairs and trade at the Korea Economic Institute of America, pointed out that the most important lessons North Korea could learn from Vietnam might be in how to improve the vitality and production of state-owned enterprises and how to give private enterprises more space to develop.

North Korea has taken some steps to deepen reform, including allowing for some market activity, but such steps have been tentative and legally ambiguous, he said.

“Taking clearer steps along the line of Vietnam and removing legal ambiguities, which means also having government officials enforce the laws appropriately, will be important steps for reforming North Korea’s economy,” he added.

In a recent telephone call, South Korean President Moon Jae-in told Trump that he hoped the U.S. would consider offering joint North-South economic projects as incentives for the North to denuclearize.

South Korea, looking to broaden its role in the historic summit, has sent more than 20 officials to Hanoi and set up a media center operating 24 hours per day from Feb. 26 to March 1 that 500 international journalists have signed up to use. They are also providing free snacks from popular South Korean bakery chain, Paris Baguette, to members of the media at the center.