Photo Essay: The End of the Small World 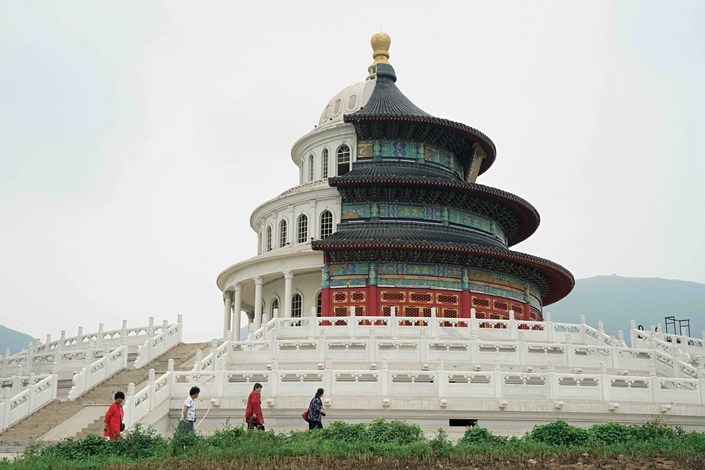 A building combining the Temple of Heaven with the U.S. Capitol in the Great Wall Film and Television Cultural Park in Shijiazhuang, Hebei province. Its peculiar design has sparked controversy. Photo: Cai Yingli/Caixin

As China’s economy became increasingly open to the outside world from the late 1970s on, its society followed suit as people sought out new experiences and to broaden their horizons.

To cash in on this newfound openness, so-called “small worlds” featuring miniature versions of iconic landmarks from around the world began to spring up across the country in the 1990s, giving people a glimpse of the world beyond China’s borders at a time when few were able to travel internationally.

Two of the most prominent “small worlds” are Window of the World in Shenzhen, Guangdong province, which opened in 1994, and Beijing World Park which opened in 1993. Smaller cities followed suit, and soon citizens living all over the country had the chance to gawk at miniature Manhattans, scaled-down Sydney Opera Houses and tiny Taj Mahals.

But the golden age of many such parks is well behind them, with visitor numbers declining over the years.

“Why would anyone come here to see a fake plane? So many people have been on a real one. I thought this park was for things we could not see at home,” a little boy visiting Beijing World Park asked his mother, pointing to a model plane beside a man-made hill.

As living standards and incomes have grown in the past few decades, China’s new middle class have grown less interested in seeing shrunken sights when they can afford to go see the real thing. Outdated business models and poorly-maintained attractions compound this problem, and the parks have been unable to keep up with other forms of entertainment now on offer.

As Shenzhen and Beijing’s copycat-park stars suffer, the situation is even direr in other cities. According to local media, Chongqing’s Foreigner Street will be dismantled in March so the land it sits on can be redeveloped.

While most “small worlds” featured buildings from different countries standing aside one another, the Great Wall Film and Television Cultural Park in Shijiazhuang, Hebei province has gone one step further in its effort to blend cultures. One of its “creative” exhibits combines half of the U.S. Capitol building with half of Beijing’s Temple of Heaven. Most of its visitors come from smaller towns near the city.

“The ticket here is not expensive, just 30 yuan ($4.48),” said one tourist named Li Zhao who drove to the park with his family. “The productions look rough indeed, but it doesn’t really matter what we get to see. We just need a place for entertainment over the weekend.”