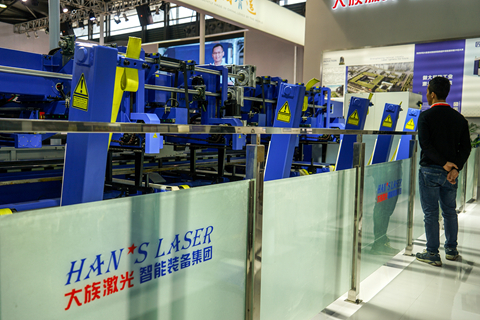 Han's Laser products on display at an exhibition in Shanghai. Photo: VCG

The Shenzhen Stock Exchange where Han is traded has notified Hong Kong that all purchases have been halted via a stock program connecting the two cities’ bourses. The issue? Apparently Han’s Laser has become only the second stock in the connect program’s history to approach an upper limit for foreign ownership.

China set up a connect program between the Shanghai and Hong Kong stock exchanges in 2014 and followed with a similar one for Hong Kong and Shenzhen two years later in a bid to make mainland stocks more accessible to foreign investors. Rules now stipulate that foreign ownership of any listed Chinese company cannot exceed 30%, and buying from Hong Kong is halted after ownership reaches 28%.

Hong Kong has notified local investors that Han’s Laser has already crossed the 28% threshold. Hong Kong-based investors will still be able to sell the company’s shares through the connect program, though buying won’t resume until foreign ownership falls below 26%. Shanghai International Airport Co. was the only other company to hit the upper ownership limit in 2015, though the level was back below 26% as of last June.

The strong interest in Han’s Laser is apparent in its stock price. The company’s shares have jumped nearly 40% since the start of this year amid a broader rally for China’s stock markets.