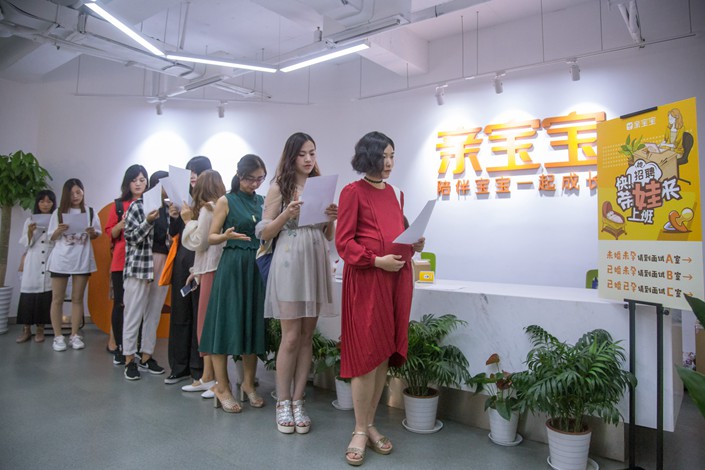 Since the founding of the People’s Republic of China in 1949, the status of women has greatly improved, especially at school and in the workplace. But with the changing of restrictions to allow couples to have two children, society has grown worried about women’s rights. Recently, a new government directive stated that employers cannot ask prospective female employees about their plans for getting married or having children.

The intent of the new regulation is good, but it treats symptoms without treating the root cause of the problem. Because the reality is this: the time that female employees take off when they are pregnant or breastfeeding is a burden for companies. And businesses have too many ways of passing these costs on to working women and their families. Discrimination in the interview process is just the symptom. Especially after the loosening of the one-child rule, this problem will only become more serious.

The fertility rate among working women in China is extremely low. According to the 2010 census, the fertility rates of Chinese women with a specialized or undergraduate education are 0.83 and 0.79, respectively — almost the lowest in the world. This is because the cost of child care in China is almost the highest in the world. Only through large subsidies will the government be able to restore the fertility rate to a healthier level. According to preliminary estimates, 5% of gross domestic product, or 4 trillion yuan ($596 million), is needed per year in the form of cash and tax cuts to encourage people to have children and raise the fertility rate to the replacement rate of 2.1 children per couple.

But will encouraging fertility exacerbate gender inequality in the workplace? This should be a particular concern for young mothers and future mothers.

Sweden is now considered to be of the world’s most equal societies. The country’s new succession law gives women the same inheritance rights as men. The proportion of women in its parliament is 40%. Additionally, a special cohabitation law dating back to the 1980s acknowledges the legal status of cohabitation. Sweden’s fertility rate reached 1.9 in recent years, the second-highest in Europe after France.

In Iceland, which also has one of the highest fertility rates in Europe, women have, on average, two children — and the employment rate among women is 80%. This is in part thanks to Iceland’s comprehensive social welfare system, which for example provides 90% of children with state-funded kindergarten.

We can see that China has a lot to learn in reducing the cost of childbearing and ensuring the status of women, such as:

1. Expand kindergarten services. In developed countries, especially in Scandinavian countries and France, the government provides nurseries to help professional women resume work as soon as possible after giving birth. However, China has a serious lack of such child care services.

2. Allow flexible work hours and let women work remotely. Enterprises should be encouraged to allow employees to work where and when they choose, especially for pregnant and breastfeeding women. Ten years ago, Ctrip tried allowing some service personnel to handle customer requests at home, and work efficiency and customer satisfaction increased. More importantly, the measure was particularly popular with female employees who had just given birth.

3. Improve public infrastructure. In developed countries, especially Scandinavian countries, public spaces have many designated places for child care, such as breastfeeding rooms. In contrast, young parents in China have relatively limited access to child care support infrastructure. Even if they take their kids out, they must make all kinds of preparations before leaving the house.

4. Improve guarantees for single-parent families. In Scandinavian countries, single mothers are quite common. In France and northern European countries, many children come from unmarried households. But these countries provide the same legal and welfare services to children of unmarried parents as to children of married parents. Of course, we are not advocating for more single-parent families, but we cannot discriminate against them.

5. Allow a high-tech means of reproduction. As IVF and egg freezing technology improves, many European and North American countries allow women to choose these methods for prolonging their reproductive life and reduce the opportunity cost of child care. China’s legislation lags far behind.

In addition to following these international practices to reduce the cost of child care, China also needs to implement more radical social policies. China has a deep-rooted tradition that men should focus on their careers while women should take on most of the child-rearing and other housework, yet Chinese women face the same pressures when it comes to education and careers.

In order to truly achieve gender equality, society must form a consensus that men should participate in raising their children and doing other housework, for example. Otherwise, I fear that more women will not even marry, let alone have children. A more equal society for men and women is conducive to improving fertility.

In conclusion, I don’t believe there is a conflict between promoting fertility and advancing equal rights for women. Many countries with comprehensive welfare systems have proven that it can be done. If we can learn from the experience of these countries, effectively reduce the cost of childbirth and improve the status of women, we may also promote equality between men and women while increasing the fertility rate. If society and the government offer more support to women so they can freely choose how to live, the country’s fertility rate will rise.

James Liang is the chairman and co-founder of online travel giant Ctrip. He is also a professor of economics at Peking University’s Guanghua School of Management. He is the author of “Too many people in China?” which analyzes the impact of aging on entrepreneurship and innovation.