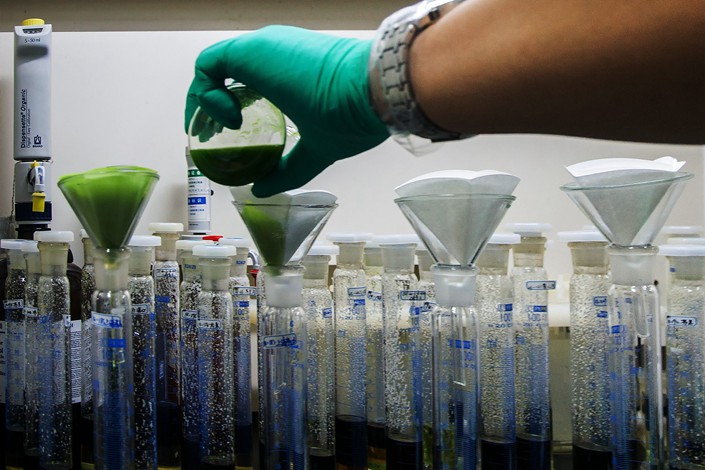 Staff members filter samples on June 13 in a laboratory at an agricultural inspection center in the southern city of Shenzhen. Photo: VCG

China’s spending on research and development (R&D) continues to grow — but far more in the nation’s eastern regions than elsewhere, a new study reveals.

Researchers from North China’s Dalian University of Technology on Tuesday released one of China’s first comprehensive studies of long-term R&D trends, which tracks the country’s expenditure from the 1990s to 2017.

The report suggests the bulk of China’s R&D funding has shifted away from government sources to business ones — which include state-owned enterprises (SOEs) — as well as which industries dominate the nation’s R&D landscape.

China spent 1.76 trillion yuan ($262.42 billion) on R&D in 2017, making it the world’s second-biggest spender, surpassed only by the U.S, according to the report. The same figure is given by China’s National Bureau of Statistics.

R&D spending for 2016 amounted to 44% of that spent by the United States, which remains the world’s top spender today. China’s spending was 1.5 times the size of Japan’s that year, and double Germany’s.

The nation’s investment “intensity” — or research spending as a percentage of GDP — is also close to many developed countries, the report says. China’s gross expenditure on R&D reached 2.11% of GDP in 2016, a little behind the average for the Organization for Economic Cooperation and Development (OECD), a club of rich countries, which was of 2.34%.

Guangdong, Jiangsu and Shandong, all provinces along China’s eastern seaboard, were the biggest spenders in 2016, while the cities of Beijing, Shanghai and Tianjin had the highest investment “intensity.”

One of the biggest changes in China’s R&D spending since 1995 has been the sources of funding, the report found. Businesses, including state-owned enterprises, provided 70% of R&D investment in 2016, compared to 30% in 1995, when government departments and other organizations accounted for the bulk of funding.

SOEs accounted for around 52% of R&D spending by domestically listed companies in 2016.

Businesses are increasingly executing R&D expenditure decisions, the report shows — in 1995, universities and other research institutions executed 60% of the country’s R&D expenditure, while in 2016 businesses accounted for 77%.

The researchers also found a significant spending disparity between different institutions of higher learning. Beijing’s Tsinghua University, the nation’s top spender, pumped 2.92 billion yuan into R&D in 2016, while two-thirds of the top 30 universities spent between 500 million and 1 billion yuan.

Among domestically listed companies, more than half of R&D spending in 2016 went to industrial applications and telecommunications technology. The third-largest category, consumer discretionary goods and services, accounted for 18.59%, the report said.