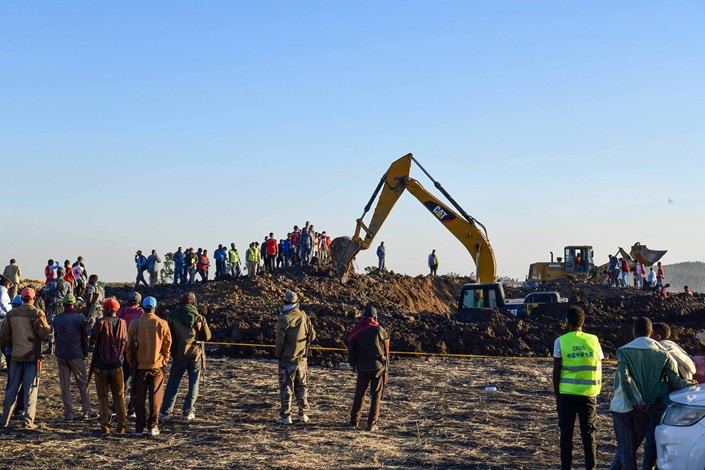 Rescue and recovery crew use an earth mover to sift through debris in the crater where Ethiopian Airlines Flight 302 crashed on Sunday in Bishoftu, Ethiopia, killing all on board. Photo: VCG

China’s Civil Aviation Administration ordered airlines across the country to ground (link in Chinese) all Boeing 737 Max 8 aircraft by 6 p.m. on Monday, after a jet plane of that model crashed in Ethiopia killing more than 150 people.

Investigators were still working to determine the cause of the Sunday crash, which was the second by that model of jetliner in less than six months. A Boeing 737 Max 8 operated by Lion Air crashed off of Indonesia in October killing 189.

In a statement ordering that the aircraft be grounded, China’s Civil Aviation Administration drew a link between the two crashes, saying both jet planes went down shortly after take-off, and both were “recently delivered.”

Of a total of 355 Boeing 737 Max 8 flights set to take off today from airports around China, at least 29 had been cancelled by mid-afternoon, and 256 had been transferred to a different model of aircraft, according to industry data provider VariFlight.

Chinese airlines operate 96 of the narrow-body twin-engine jetliners, which are mainly used on short-haul routes and sometimes fly five or six times a day.

Ethiopian Airlines flight 302 was bound for Kenya when it crashed shortly after takeoff on Sunday killing all 157 people on board, including at least eight Chinese passengers. It took off from the Ethiopian capital at 8:38 a.m. local time, lost contact with ground staff six minutes later, and crashed in the resort town of Bishoftu.

Ethiopian Airlines acquired the aircraft just four months before it crashed. Meanwhile, Lion Air flight 610 went down in Indonesia three months after it was delivered.

China Eastern Airlines, one of the nation’s largest flight carriers, wrote to Boeing Co. saying it would ground the planes until the company issues a commitment that the two incidents were not caused by a design flaw, China Eastern chairman Liu Shaoyong told Caixin (link in Chinese) on the sidelines of the ongoing “Two Sessions” meeting in Beijing.

Other carriers that operate Boeing 737 Max 8s include Air China, China Southern and Hainan Airlines, according to the State-owned Assets Supervision and Administration Commission of the State Council (SASAC), a body that oversees government-owned industrial and service conglomerates.

Growing safety concerns about the aircraft model have placed pressure on the manufacturer, which relies heavily on the top-selling jetliner and its commercial airplane business.

Bloomberg Intelligence estimates that the model accounts for almost one-third of Boeing’s operating profit and was hoped to contribute about $30 billion in annual revenue as factory output rises to 57 jets per month this year.

Boeing’s commercial airplane business accounted for 60% of its total revenue of $101.1 billion last year, according to the U.S. aviation giant’s annual report.

Boeing said in a statement that it was “deeply saddened” to learn of the crash and would send a technical team to the site to assist Ethiopian and U.S. air crash investigators.

Zhao Runhua contributed to this report.