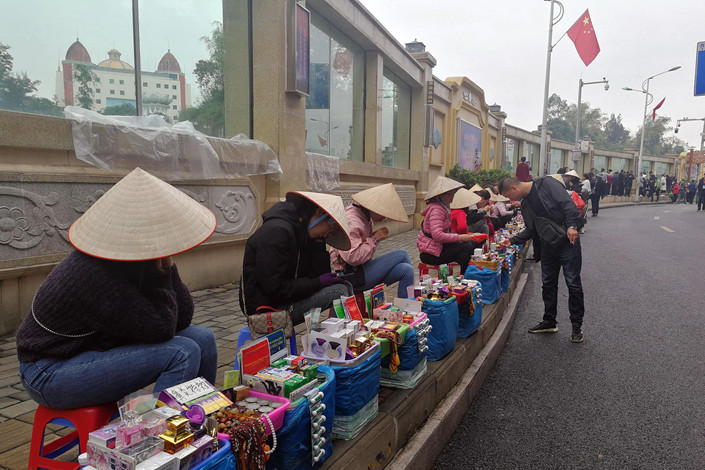 Vietnamese merchants sell goods in the Chinese border city of Dongxing, which is in the Guangxi Zhuang autonomous region. Photo: VCG

Trade tensions between the United States and China have caused some multinationals to begin moving their production chains to Vietnam, but a former Vietnamese official says that it shouldn’t be the only reason.

Nguyen Mai, chairman of Vietnam’s Association of Foreign Invested Enterprises (VAFIE), told Caixin that many countries have been trying to benefit from the shift in foreign investment since the beginning of the trade war — and “Vietnam is no exception.” Investors from the U.S., South Korea and Japan, for example, have started to move their factories from China to its less costly neighbor, he said.

“We certainly welcome this,” said Ngyuen, who is a former vice minister of Vietnam’s Ministry of Planning and Investment and a specialist in international investment research. “But we also hope that foreign investors choose Vietnam not just to avoid risks from the trade war, but for other reasons as well.”

The onset of the trade war has caused many countries to “strive for the opportunity of industrial transfer,” Nguyen told Caixin. But Vietnam’s opening and reform project has been underway since 1986, and the country has in recent years become more active in international trade organizations.

Vietnam has become more integrated into global economic and trade systems, such as through the Comprehensive and Progressive Agreement for Trans-Pacific Partnership. The ASEAN member state has concluded bilateral free trade agreements with developed economies such as the European Union, Japan and South Korea, which also provides more incentives for enterprises to invest in Vietnam and build factories.

Foreign direct investment (FDI) into Vietnam is also increasing, with the nation receiving $19.1 billion in FDI in 2018, an increase of 9.1% from 2017, Nguyen said. The government is taking strategic measures to make it more convenient for foreign enterprises to invest in Vietnam, such as by simplifying procedures for approving investment operations and reducing investment restrictions on certain industries and fields.

China has also been an investor in Vietnam, including through its Belt and Road Initiative, with a total registered investment in Vietnam of $12 billion as of 2018. Huawei Technologies Co. Ltd. has also been operating in Vietnam — the embattled telecom-equipment maker is in “proactive talks” with Vietnam’s biggest mobile network operator Viettel about opportunities to provide 5G technology in the local market, Nguyen said.

However, historical disputes and maritime territorial sovereignty disputes have complicated the development of Sino-Vietnamese relations. Chinese enterprises entering the Vietnamese market should be careful of these factors, Nguyen said.

However, the trade war has also caused shocks to the global market, which could also hurt export-dependent Vietnam, Nguyen warned.

The Vietnamese expert also said that Vietnam’s advantages as a “cheap production base” in Southeast Asia have been weakened as land prices and wages have risen.