By Zhang Yu and Ren Qiuyu 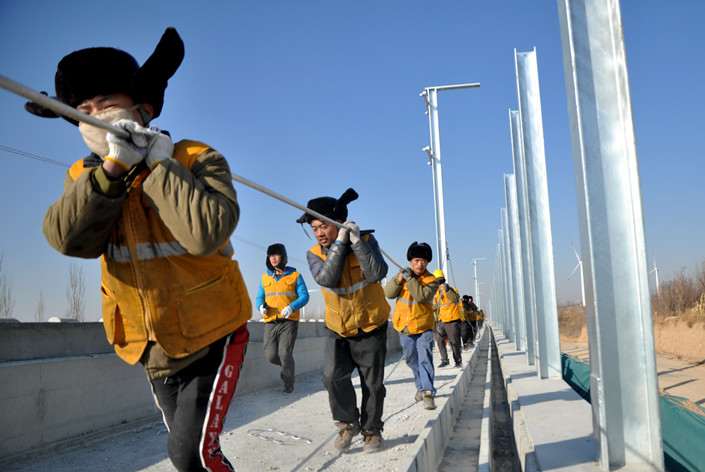 Workers prepare to lay a high-speed rail line from Beijing to the nearby city of Zhangjiakou, Hebei province, on Nov. 26. Photo: IC

The development of the “Jing-Jin-Ji” cluster is lagging behind other major city integration projects, a new report from the China Development Research Foundation has found.

The city clusters are major urban integration projects that aim to boost urbanization and national development. The projects aim to connect multiple smaller cities, easing transport between them and integrating their economic development.

Jing-Jin-Ji is a planned city cluster that will integrate Beijing, nearby Tianjin, and Hebei province. It is tapped to become one of three “world-class integrated city clusters” along with the Yangtze River Delta and the Pearl River Delta Greater Bay Area. The former includes Shanghai, Jiangsu province and Zhejiang province while the latter includes Hong Kong, Macau, and nine cities in Guangdong province including provincial capital Guangzhou.

Hebei province’s name is abbreviated to “Ji” as the present-day province includes the Han dynasty Ji province, one of China’s nine ancient provinces.

The report, titled “Report on China’s City Cluster Integration,” established an index, ACEP, to measure the integration of 12 different planned clusters around the country. The ACEP index reflects factors including economic integration, connectivity and institutional synergy. The higher the ACEP index reading, the greater the level of regional integration.

The report found that the greatest level of integration was in the Pearl River Delta and the Yangtze River Delta. In 2015, the ACEP index readings for these two clusters were 61.58 and 56.79, respectively, followed by the Shandong Peninsula, Jing-Jin-Ji, Central Plain Region and the Central-South Liaoning region, which all scored between 30 and 40. The six remaining clusters scored between 15 and 25 on the index.

The study found that if the underdeveloped Hebei cities Zhangjiakou and Chengde were excluded, the Jing-Jin-Ji integration index would improve significantly. If more remote Hebei cities of Qinhuangdao, Handan and Xingtai were also excluded, Jing-Jin-Ji would rank higher than the Shandong Peninsula in its integration.

“There are two key variables in the future development of Jing-Jin-Ji: one is whether Xiongan New Area can play a pivotal role in balancing regional development,” Yu said, referring to the new city under construction 100 kilometers (62 miles) southwest of Beijing. The role of Xiongan is not to concentrate the high-quality resources of Beijing and Tianjin into a Hebei city, Yu said, but to disperse high-quality resources to other regions to allow cities to share resources.

Together, the Jing-Jin-Ji region accounts for about 10% of China’s national economy, but if the Shandong and Liaoning agglomerations are added, the economic share exceeds 20%, consistent with that of the Yangtze River Delta. If the three can play a synergistic role and promote economic integration in northern China, Yu said, then the Jing-Jin-Ji area has promising prospects.