By Wang Jiawen and Zhang Titi 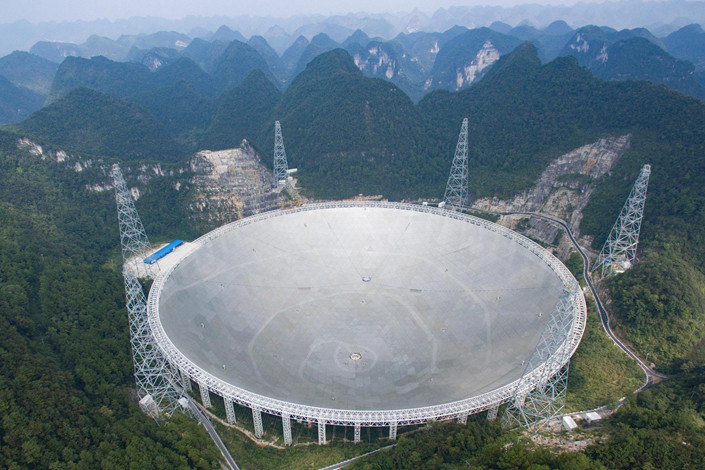 An aerial view in June 2016 of the nearly completed FAST (Five-Hundred-Meter Aperture Spherical Telescope) in Southwest China’s Guizhou province. Once construction is finished, the installation will be the world’s largest radio telescope. Photo: VCG

As China signs on to the global competition to build next generation high-speed particle colliders, many are questioning whether the astronomical costs are justified — and if the funding they churn through would be better spent on basic scientific research.

In November, the Institute of High Energy Physics at the Chinese Academy of Sciences (CAS) released a report on plans to build a Circular Electron Positron Collider (CEPC) over the next decade. Under the plan, the CEPC will have a diameter of 20 kilometers and would cost an estimated 30 billion yuan ($4.5 billion).

In January, the European Organization for Nuclear Research (CERN) released its own conceptual design report for a new generation of particle collider, the Future Circular Collider, which presented different options for the 100-kilometer (62 mile) ring. Its estimated cost is 24 billion euros ($27 billion).

Particle colliders are designed to research the properties of matter. Matter consists of elementary particles, called quarks and leptons, that are smaller than atoms and are hard to find in nature. When charged particles collide at high speeds in a circular accelerator, such elementary particles can be detected. Indeed, the existence of the Higgs boson particle was detected in 2013 in the Large Hadron Collider by European physicists at CERN near Geneva, Switzerland. The LHC is the largest and highest-energy particle accelerator in the world.

Devices such as particle colliders — which are grouped together with large telescopes and other devices as “large scientific installations” — are designed to help answer some of science’s most fundamental questions, such as the structure of the physical world and the origins of life and the universe.

China has built a number of large scientific installations over the years. The Five-Hundred-Meter Aperture Spherical Radio Telescope, or FAST, located in southern Guizhou province, was built in 2016. It covers an area equivalent to 30 soccer fields and cost about 667 million yuan to build.

Human curiosity has no end, but dreams of massive scientific installations face budgetary constraints — and everything has an opportunity cost. According to a recent report on Chinese research and development (R&D) out of Dalian University of Technology, basic science funding accounted for only 5% of China’s total social R&D expenditure in 2017, or to 1.76 trillion yuan. That’s one-twentieth of all scientific funding spent on the fundamentals. It also found researchers are paid very little. So are massive scientific installations, which can cost tens of billions of yuan, justified?

Even after CAS released its November plan, the question of whether China should build a new particle collider remains controversial.

In September 2016, Chen-Ning Yang, a Chinese-born American physicist who won the Nobel Prize in physics in 1957, penned an article opposing the particle collider. He argued that rather than sink billions of yuan of investment into the large scientific installation, more money should be put toward social problems and other scientific research.

Meanwhile Chinese-born American mathematician Shing-Tung Yau, a recipient of the Fields Medal, disagreed. He argued that the LHC was what allowed Europe to overtake the U.S. in physics research, and said building the CEPC could be a huge opportunity for China to do the same.

This position was echoed by the head of the institution that wrote the CEPC report, Wang Yifang, who penned a response article to Yang saying a large collider would be a boon for China’s high-energy science field.

“It seems that particle physics has entered a bottleneck period,” He Jibo, a professor of physics at CAS, told Caixin. “So while particle physicists are pursuing upgrades to the European LHC, they are also considering building the next generation of colliders in an effort to deepen understanding of the basic composition of matter and its interactions.”

But there are serious questions about the true value of the next generation of colliders. Cao Zexian, a researcher at the Institute of Physics, CAS, believes using high-speed collisions to discover new particles has been “played out.” “Is there any ‘new physics’ in such a large energy range?” he asked.

He Jibo agreed. “At present, we aren’t sure that new physics and new particles will be discovered,” he said. “But we will never know if we do not experiment,” he added.

Those who oppose the CEPC point to the defunct Superconducting Super Collider (SSC) project, which the United States had planned to build in Texas in the 1980s. The SSC was to have a ring circumference of 87.1 kilometers, and an estimated cost of $4.4 billion, but it was cancelled by the U.S. Congress in 1993 after $2 billion had already been spent.

While the Higgs boson was the most eye-catching discovery by the LHC, its work was not always so inspiring. In 2016, it was believed to have discovered a new particle — but this turned out to merely be the result of statistical fluctuations.

Other similar incidents have hurt the credibility of large scientific installations, Cao argues, saying it makes him doubt whether the collider ring will be funded. What worries him more is that the aim of China’s collider will not necessarily be what “really counts,” and that it will instead be merely used to promote the launch of Chinese projects.

Li Xia, a professor of scientific history and culture at Shanghai Jiaotong University, worries that such large-scale scientific installations often blow their budgets and require continuous investment. The sheer amount of funding required also means that the project will need to be strictly supervised to fend off corrupt practices.

A controversy with the LOT

The particle collider is not the only controversial large scientific installation. Chinese astronomers have been calling for a large-aperture optical infrared telescope, which China currently lacks. In 2016, the National Development and Reform Commission announced that the Large Optical-infrared Telescope (LOT) was on the list of major science facilities to be built during the 13th Five-Year Plan period (2016-2020). Plans for the 12-meter LOT have called for a budget of 1.9 billion yuan.

The fourth mirror may limit the field of view for imaging, and the extra reflections could also interfere. The four-mirror method is also still in an experimental phase, whereas the three-mirror technique is simpler and its effectiveness has already been proven, critics say.

One astronomer who wished to remain anonymous told Caixin that the four-mirror plan would lose 15% of its light transmission efficiency compared with the three-mirror plan. It would also increase construction time and make the project significantly costlier and more complicated.

At an expert consultation on conceptual designs for the LOT in April 2017, eight international experts, including Johannes Andersen — who was in charge of the Very Large Telescope in Chile as well as the Nordic Optical Telescope — and Bernard Delabre of the European Southern Observatory, inspected the three- and four-mirror schemes. The group concluded that the four-mirror plan would not meet the NDRC requirements for field of view, optical sensitivity, and budget.

The following July, CAS held an internal meeting to assess the LOT plans with 21 experts who voted on the plan. The majority voted for the four-mirror plan. However, some of the attendees disputed the vote, saying that the presentation on the three-mirror plan was inadequate and that the experts had no way of comprehensively understanding its advantages.

Chen Jiansheng, a supporter of the three-mirror plan from Peking University’s Department of Astronomy wrote an open letter addressed to the Chinese Academy of Science’s Bureau of Facility Support and Budget. In it, Chen questioned whether the participants in the assessment meeting were qualified to evaluate the plans for the telescope, calling it an “unfair meeting.” Since then, other letters have been published calling for greater openness and transparency around the telescope scheme.

According to people familiar with the matter, a vote organized by the National Observatory in December also favored the four-mirror plan. Those aware of the vote told Caixin that this vote was more representative and more official than the July vote. The vote ended the debate over the design for LOT — the four-mirror plan was selected.

Chen told Caixin that he didn’t participate in this second vote and that he could not endorse the decision. He disapproved of the Chinese Academy of Science’s handling of serious scientific and technological disputes in such a simple way, he said.

The National Astronomical Observatory and the Chinese Academy of Sciences did not respond to Caixin’s inquiries about the current status of the LOT project.

The funding allocation for scientific research in China tends to value installation over personnel. Caixin found that a doctoral graduate sent to work at FAST after graduation receives a salary of 6,000 yuan per month, with a residence allowance of only 150 yuan. In addition, many people close to the FAST research team said that the National Observatory is running a deficit in several sections. It also has plans to cut expenditures, such as through restricting travel and suspending performance pay.

According to a 2018 article written by Li Xia and Li Gefei, a scholar at Waseda University’s Graduate School of International Culture and Communication Studies, the shortage of funds to actually operate large scientific installations is down to an overall shortage of funding. In 2016, China invested 1.568 trillion yuan in R&D, accounting for 2.1% of GDP. But only 82.29 billion yuan was spent on experimental development, and only 5.2% was spent on basic scientific research.

A report issued by the National Scientific Research Council in June said China spent about 5% of research funding on basic research and 85% on R&D between 2001 and 2015. In the United States, 17% was spent on research, and 64% on development.

For example, the CEPC would require 10 years of construction and planned investment near 30 billion yuan. Based on China’s research funding in 2016, the investment for this project would take up 3.6% of annual spending.