Opinion: China and the Summer Solstice of the German-American Axis 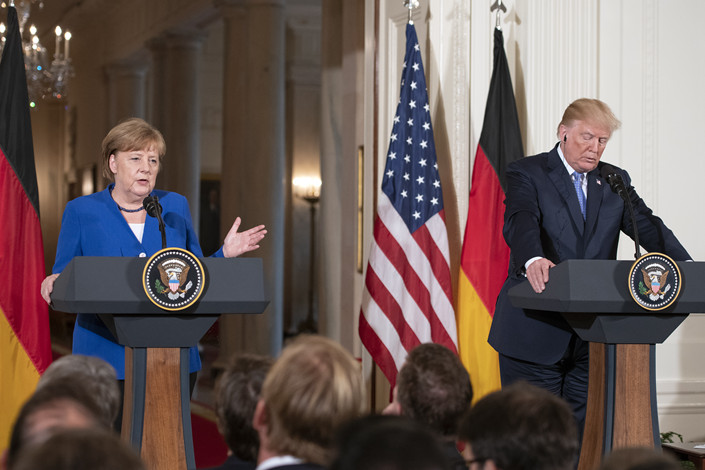 In the next few months European history will accelerate. Brexit’s final act, the EU parliamentary elections and the consequent Byzantine negotiations in Brussels to select the new members of the all-powerful European commission will demand drastic decisions by the Europeans.

Germany will be at the strategic forefront as the continent’s economy and political weight continue to grow. Yet any decision made in Berlin about the future of the union will loudly reverberate in Washington and Beijing as both America and China have been lobbying Germany to take sides in a what former U.S. Treasury Secretary Henry Paulson has called an “economic iron curtain.” The Berlin Wall defined the fault line of the two geopolitical camps during the Cold war. This time Berlin’s political decision to buck or support America in its escalating geoeconomic competition with China could be a consequential strategic factor in a new epoch of global bipolarization and technological bifurcation.

Inarguably, Germany will try to play both sides and optimize its national interests. Yet as the Sino-U.S. confrontation deepens, Berlin will find this balancing act increasingly difficult to do. The status quo for Germany’s strategy had been to export a lot of butter to the world and import a few guns from America while always holding high the banner of liberal transatlanticism. Germany would abide strongly by the liberal transatlantic alliance spearheaded by Washington and lecture China and Russia on human rights. Germany would also castigate Greece and Hungary for vetoing human rights resolutions that targeted China but nonetheless continue business as usual by heavily investing in the Middle Kingdom and upgrading its technological partnership with Beijing.

With the first German strategy white paper on the pivotal economic significance of Asia and China going back to the early 1990s, it comes as no surprise that China has not only become Germany’s most important trade partner, surpassing the United States in 2016 — but also a key technological facilitator in developing industry 4.0 and efficient electric engines — two catalytic structural technological developments for the 21st century. The German industrial conglomerate Siemens Corp. has been a key technology partner in China’s industry 4.0, and the German automobile colossus Volkswagen AG has repeatedly declared that its future will be decided in China.

In 2018, Volkswagen doubled down on its meteoric investments in China and announced an $18 billion plan to develop state-of-the-art electric vehicles with its Chinese partners by 2024, defying the Sino-American trade war. Moreover, Germany’s BASF SE has been one of the first foreign companies allowed to invest in a major chemical production unit in South China’s Guangdong province. Meanwhile, Deutsche Telecom, EU’s largest telecommunication service provider, in a rebuttal of U.S. calls for a ban on Huawei Technologies Co. Ltd., declared that this could seriously slow the development of 5G, or fifth generation, mobile networks in Europe.

To be sure, Germany has not failed to observe China’s state-driven effort to become an industrial leader and potentially gain market share at the detriment of German manufacturers. Reflecting on that worry, the influential industry federation BDI has recently framed China as both a partner and systemic competitor and advised German corporations to cut their dependence on China’s market and help create a joint European front to deter a state-driven infiltration of the European market.

Germany has also led an effort to establish a European investment screening mechanism à la CFIUS, yet this is more of an attempt to build leverage and negotiate better access for German corporations to the Chinese market and not a product of a fundamental conflict of systems. Sigmar Gabrlier Germany’s former foreign minister may have opposed China’s BRI as a geopolitical tool of Beijing, but strategically Germany has no military presence in Asia and it does not see China as an existential risk to its national security. Thus its strategic options remain much broader than those of Washington, and German officials’ assertive rhetoric against China has not undermined the bilateral commercial relationship.

As a matter of fact, the rise of U.S. President Donald Trump has facilitated Germany’s geoeconomic amity toward China. For many liberal German elites, China could never be a trustworthy partner. Yet it is Trump's America that has openly confronted Germany and appointed an American Ambassador in Berlin who supports the extreme right. Furthermore, Trump’s former chief propagandist Steven Bannon is leading an anti-European “movement” in Europe and has repeatedly framed Germany as a free rider to American taxpayers. Chinese President Xi Jinping on the other hand has been nuanced and strategic in its engagement with Berlin, speaking the serene voice of globalization that attracts German elites. He has repeatedly echoed German concerns on U.S. trade unilateralism and offered investment concessions by lowering joint-venture requirements, pleasing many influential German industrialists. In 2018 BMW became the first foreign company to increase its share and acquire control of its lucrative joint venture in China.

While German industrialists have strategically expanded their geoeconomic relationship with China, Berlin has attempted to neutralize Trump’s ideological offensive in its home front: the European Union. In an effort to solidify the Franco-German axis and provide the French President Emmanuel Macron with an argument that he could sell to his domestic constituency in the coming European Parliamentary elections, Chancellor Merkel signed the Aachen treaty in January 2019 endorsing Macron’s dream for the advancement of European defense. Recently, Germany excluded U.S. Lockheed’s F-35 jet from consideration as the Luftwaffe’s next generation main fighter jet. While U.S. Boeing’s F-18 remains an option, its procurement would not substantially derail plans for the development of a next- generation European jet as the F-35 would — because the F-18 is an older platform and does not tie the German air force into a U.S.-made system for the long term. Germany could have also picked Airbus’s Eurofighter had it not feared Trump’s rage and retaliation with tariffs against German cars.

American white papers from the early 1990s saw the European Union as the sole potential peer competitor to the U.S. This has been falsified by the course of history and now only China stands as a rising peer competitor to America’s global hegemony. Germans have at times intimated that they have opted for the wrong allies in the wars they have fought — Austria-Hungary in WWI and Japan in WWII. With Trump’s brute diplomacy, Germans may feel more comfortable operating in a geoeconomic partnership with Beijing while hedging their adventurous geopolitical exposure by a more integrationist agenda in Europe. Yet Germany remains a myopic strategist as it is ignoring pressing infrastructure investments domestically in its drive to get an ever larger export surplus. It is also ignoring the need to invest in education and basic research and spur an innovation machine as the EU lags both China and the U.S. in artificial intelligence. A genuine integrationist agenda at home will require a mechanism to recycle Germany’s meteoric surpluses within the EU. Otherwise, the union may slowly disintegrate, undermining Berlin’s regional dominance and ability to project global commercial power.

To be sure, Germans are still hoping for the election of a normal U.S. president in 2020 — one who may reinvigorate the transatlantic alliance. Yet if this does not materialize, Obama’s echo of Kennedy’s “Ich bin ein Berliner” declaration in his triumphal 2008 Berlin speech may well be seen by future historians as the summer solstice of the German-U.S. strategic axis and the widening transatlantic drift that will be a strategic boon for China.

Vasilis Trigkas is an Onassis Scholar and Research Fellow at the Belt & Road Strategy Institute at Tsinghua University.