By Isabelle Li and Zhang Erchi 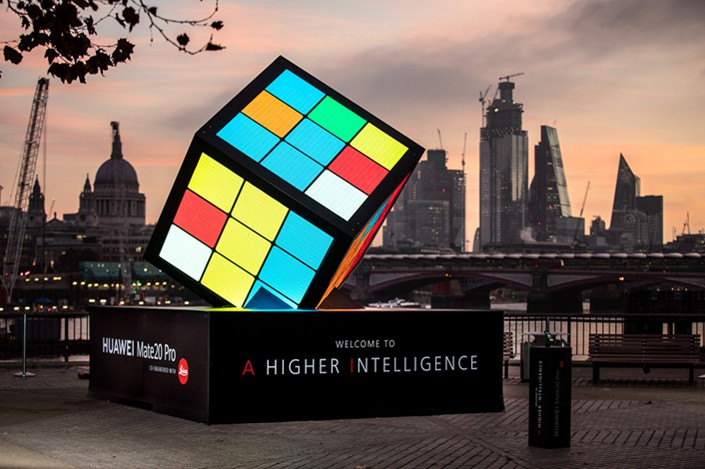 A giant AI-powered Rubik’s Cube stands on London’s South Bank to mark the launch of a new Huawei smartphone on Oct. 25. Photo: VCG

A Thursday report from a U.K. watchdog said further issues have been identified in Huawei’s engineering processes that pose additional risks to the country’s telecom networks, but these have nothing to do with Chinese government's interference.

Reports emerged in February that U.K. government officials believed the risks posed by using Huawei’s equipment could be mitigated, but HCSEC’s latest review has called this into question.

The latest report concluded it is only able to provide “limited assurance that the long-term security risks can be managed in the Huawei equipment currently deployed in the UK” as “no material progress has been made on the issues raised in the 2018 report and further issues have come to light in this year’s report.”

However, the report stated the “NCSC does not believe that the defects identified are a result of Chinese state interference,” but instead laid the blame on “poor software engineering and cyber security processes.”

Last November, the embattled Chinese telecom giant agreed after multiple rounds of talks with the U.K. government to invest $2 billion in a companywide transformation program aimed at enhancing its software engineering capabilities.

The latest report concluded, however, that it “has not seen anything to give it confidence in Huawei’s ability to bring about change via its transformation programme and will require sustained evidence of better software engineering and cyber security quality verified by HCSEC and NCSC.”

Huawei issued a statement on the same day, saying “we understand these concerns and take them very seriously.” The company said a high-level plan for the transformation program has been developed and it will “continue to work with UK operators and the national cyber security centre during its implementation.”

The U.S., Australia and New Zealand have banned or paused the use of Huawei equipment for 5G wireless networks while other countries including Japan and Germany are reportedly considering such moves, according to previous media reports.

Despite headwinds in several major markets around the world, Huawei reported strong growth in 2018. According to its annual report released Friday, the company’s net profit climbed 25.1% to 59 billion yuan in 2018.

China was the company’s largest market in 2018, contributing 51.6% of sales revenue, while Europe, the Middle East and Africa together made up 28.4% of sales.