New Progress Made on Details of Text to End Trade War: Xinhua 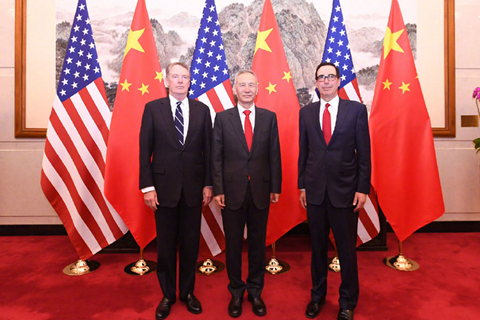 Chinese and U.S. trade officials made new progress on the text of an agreement to end the countries’ trade disputes after a full-day meeting in Beijing Friday, the official Xinhua News Agency reported.

U.S. trade officials led by Treasury Secretary Steven Mnuchin and Trade Representative Robert Lighthizer arrived in Beijing Thursday afternoon for the eighth round of trade talks between the two countries, meeting Chinese counterparts led by Vice Premier Liu He. Liu is set to travel to Washington next week for another round of talks.

No official statement has been released on the latest meeting. Mnuchin in a tweet Friday called the meeting in Beijing “constructive.”

The two countries are reported to be close to an accord that would end their nine-month trade dispute, but issues such as disagreements on enforcement remain outstanding.

Related: Much to Do in China-U.S. Trade Talks, Commerce Ministry Says